When you work as hard as Kate Beckinsale to be fit, you want to show it off to the world. And that’s just what she did in a brand new Instagram post, showcasing her ridiculous abs.

ICYDK: The English actress, 47, is playing the lead in Paramount+’s new dark comedy, Guilty Party, and apparently, filming is happening right now. Kate shared a BTS photo from what appears to be her trailer with the caption, “Well hello #guiltyparty @cbstvstudios #paramountplus.”

In the pic, The Widow alum is wearing Free City sweatpants and sweater that she’s lifting up to show off her torso. And wowzer—her core looks super toned. Plenty of people noticed, writing things in the comments like “GORGEOUS” and “Stunning 🔥.” But there was one naysayer in the group, because it’s the internet.

The comment, from an Instagram user who identifies themselves as @big_daddy_geo, simply said, “#midlifecrisis.” Well, Kate wasn’t here for it.

Her response: “Oh babes don’t worry. Just lose the fade and the cheesy sunglasses and no one will know unless you buy a Ferrari which seems not likely.” …Sorry, sorry—I’m still laughing. 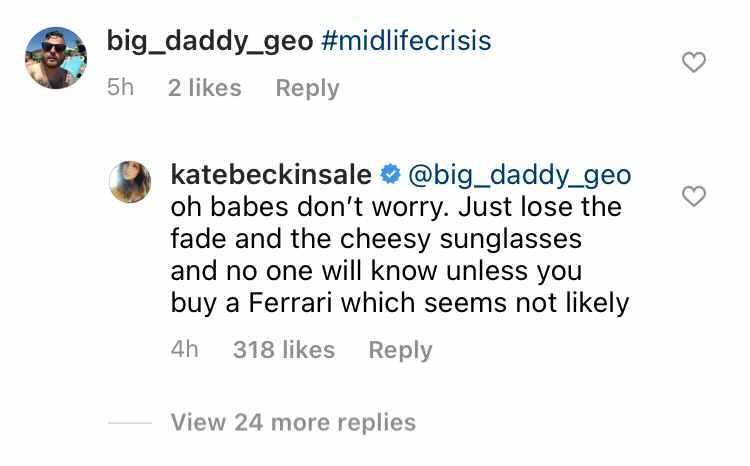 Clearly, Kate’s comeback is proof that she’s not going to let anyone slow her down—in life or in her fitness goals.Ridiculously unnecessary comments aside, the Framing actress looks phenomenal, and she’s made it pretty clear that exercise is a key part of her daily routine.

The Underworld film series star previously told Women’s Health that she works out first thing. “I wake up, eat something, and go straight to the gym,” she said. “Then, if I’m going to do cardio, I’ll do it later on in the day.”

She also doesn’t mess around during her workouts. Her trainer, Brad Siskind of Gunnar Peterson’s gym, said that she gets down to business ASAP. “The whole hour is work,” he previously told Women’s Health.

Kate said she first got into working out when Michael Bay asked her to lose weight for 2001’s Pearl Harbor. Cringe-factor at that aside, now she said that “exercise is almost more important to me moodwise.”

Kate works out six mornings a week with her trainer, doing exercises like a biceps curl as she squats, or situps with combination punches, along with cardio intervals. She also eats really well, reaching for things like chicken or eggs with grass-fed butter, salmon, and salads with radishes, brussels sprouts, and safflower oil.

Kate’s even a fan of exercising when she travels, finding trainers to work with her when she’s out of town.

And that, my friends, is how Kate looks like that at 47.