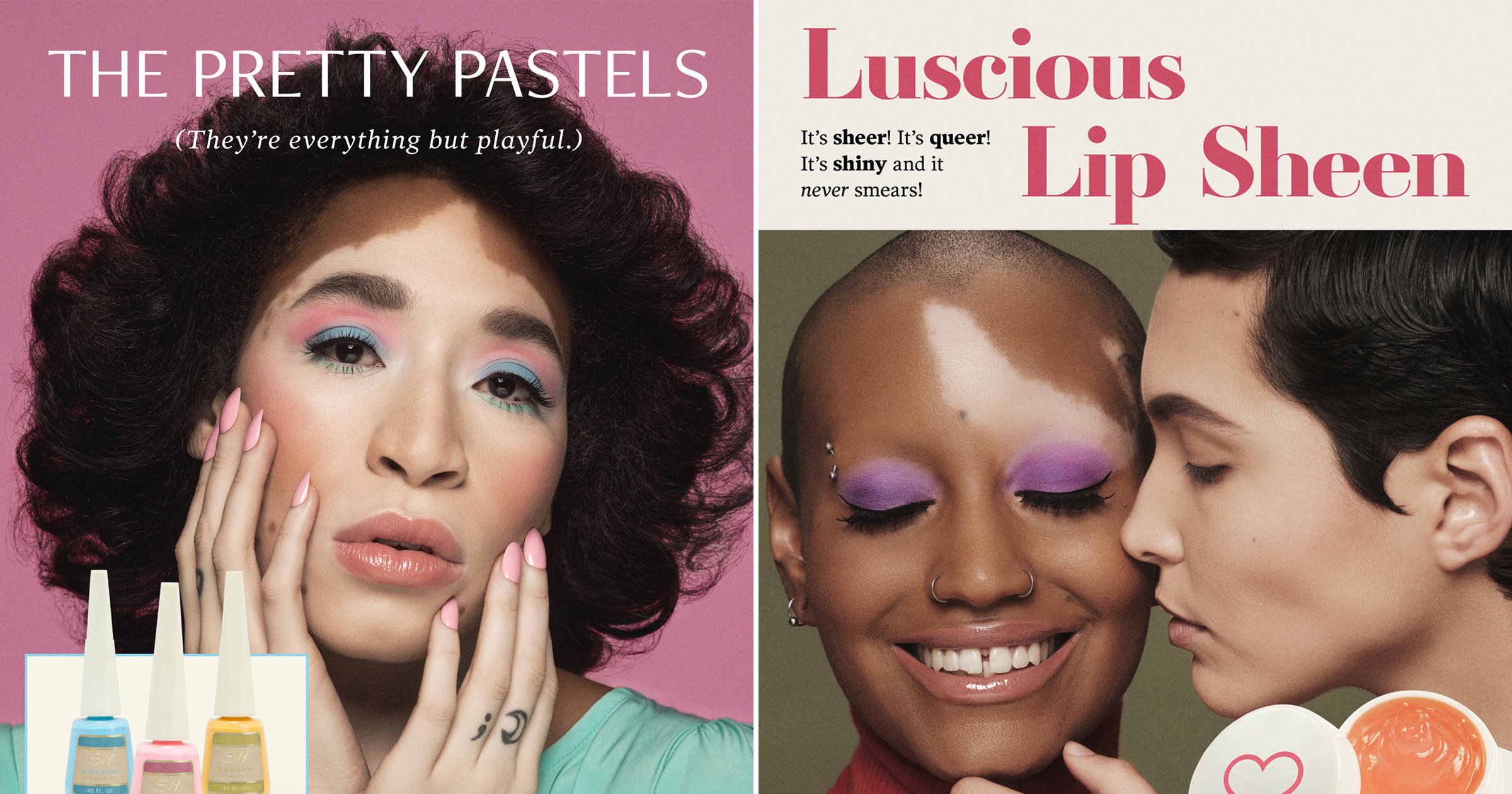 Tired of seeing a lack of diverse representation in the beauty industry, a New York-based photographer and makeup artist decided to challenge non-inclusive beauty standards.

Together they’ve published five images, all inspired by the look and feel of old adverts. The retro pastel makeup anchors the images firmly into their time.

But the big difference is they’ve been ‘updated’ to include a far more diverse range of models than would have been seen on the original adverts which favoured white, thin and cis-female models.

The series sets out to challenge traditional notions of beauty and confronts observers with the visual reality of how advertising would look if it included a diverse range of people.

To front Prim ‘N Poppin’, Julia and Brenna selected models from a variety of racial backgrounds and identities including queer, transgender, and non-binary. They also worked with models from the body modification, vitiligo and body positive communities.

Although they focus on reworking vintage ads, the pair also wanted to prompt wider conversation about inclusivity in beauty campaigns today.

Julia believes things are ‘changing more quickly than they ever have’ in the industry, but the work is by no means done.

Speaking exclusively to Metro.co.uk, she says: ‘I am seeing the landscape change but we still have a long way to go. There’s a lot of talk about how inclusivity is trending and how not everyone is authentic in their representation.

‘Brands are feeling the pressure to step up and make changes whether they like it or not. That is on the outside as far as their advertising goes but that is also internally in terms of who is on their team.’

One of the models from the body modification community told Brenna that she believes if society saw people that looked like her more often, she’d probably be treated differently.

As well as beauty campaigns affecting individual self-esteem, they shape our wider perception of what is deemed normal, attractive and aspirational, which is something that the pair wanted to subvert.

Alongside the images themselves, Brenna and Julia wanted to rethink the words used to advertise products.

Phrases on old beauty campaigns often seemed to be about ‘changing’ the face according to the duo, rather than enhancing looks or artfully playing with products.

One of the pictures is captioned: ‘Either way, the choice is yours to choose’, while another reads: ‘It’s sheer! It’s queer!’

Every part of the reworked adverts were considered to imagine healthier relationships with beauty and to spotlight the identities of those who were typically excluded from campaigns.

Conceptualisation and shooting took just a few months, with Brenna working as a creative director for the first time.

That came with increased freedom over the execution of the final designs – something that Brenna relished.

She says ‘calling the shots’ made it easier to achieve their goals with Prim ‘N Poppin’. ‘We built this ourselves – all the pieces we got to choose,’ she says.

‘If you’re going to do something, think about what you’re doing and what you’re saying and the impact that can have on others. Brenna and I really connected over that.’

Julia and Brenna agree that the more commercial the project, the harder it gets to put diversity at the top of the radar – that is, depending on who is in the director’s chair.

Julia says she will always ‘try as much as possible’ to influence the diversity of talent on shoots because when trying to break down traditional notions of beauty – which are often upheld by mainstream advertising – that agenda needs to be shared by those controlling the shoot.

Although, she has been in work situations in which people have flagged inclusivity concerns, only for ‘higher ups’ to not act on them. The feedback she’s had repeatedly is: ‘I tried.’

Just recently she was given the opportunity to present casting ideas, but then ‘they went in a more conservative direction’.

Brenna adds: ‘That’s part of the issue of not having a diverse team at the top because people have different experiences and if the person in charge has no idea of what people are going through, whether that’s by choice or just ignorance, then the way they create is going to be different.’

Fans will be pleased to hear that the series is going to be expanded. Julia and Brenna know that not everyone can be represented in their current five images, so there are plans to develop that.

While we watch this space, they hope to see the beauty campaigns of today take notes.

They believe, ‘this is a piece in a much bigger puzzle.’