In the first verse of Lil Baby’s song “Woah,” he declares, “Not the big, cheap teeth—that’s embarrassin’.” The rapper is referring to porcelain veneers, the teeth coverings that, in the past few years, have become exceedingly popular. Veneer-focused content is commonplace on social media. No matter what else your timeline may render, veneers now show up almost as a status symbol for celebrities.

Wondering why veneers are so popular now? Read here for an explanation.

Applied in a procedure dating back almost a century, veneers were once a strictly customized experience—one that considered the patient’s existing teeth, their mouth’s shape and size, their lifestyle and even their skin tone. Today, there has been a shift. When one thinks of the dental adjustment, images of neon-white coverings too big for the mouth they occupy may come to mind. Some folks even refer to veneers as “Chiclets,” making reference to the square shape of the widely known chewing gum. This is the appearance Lil Baby vividly advises against.

“After research on the procedure, particularly on dentists who could perform it, the clear choice was Apa Aesthetic in L.A.”

He’s not the only one discouraging it. Dentists with decades of experience are also cautioning against recent unconventional, and sometimes dangerous, trends in cosmetic dentistry. Count Pasha Hakimzadeh, D.D.S., and Ben Reyhani, D.D.S., of Apa Aesthetic in Los Angeles among them.

After improving the smiles of celebs such as Nina Parker, Kristen Noel Crawley and countless others, Hakimzadeh and Reyhani continue to focus on crafting natural-looking grins that are 100 percent personalized.

“The issue with social media is, you can get overwhelmed because there’s so much to click and flip through,” Hakimzadeh says of the idea that veneers should imitate the smile of another person. “Someone else’s teeth may not look good on you, even if they look good on them—but explaining that to some patients is very difficult.” 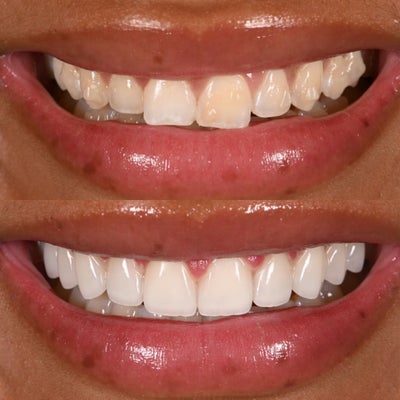 Many people also seem convinced that installing veneers means the natural tooth has to be drilled down to nearly nothing. That’s not the case. “Veneers are porcelain pieces with a contact- lens thickness,” Hakimzadeh explains. So where does the notion that you have to cut down the tooth come from? More than likely, it’s actually referring to crowns. They can also be made of porcelain but require a vastly different process.

“It’s not that I hated my teeth or even that they were in dire need of an adjustment.”

“The difference between veneers and crowns is that veneers generally just cover the surface, and you maintain the majority of your own tooth structure,” Hakimzadeh explains. “When you see these videos and the teeth are nubs, you have to wrap the entire tooth with a crown.”

At Apa Aesthetic, unless it’s absolutely necessary, only the thinnest outer layer is compromised. This was something I made sure of before choosing to have the procedure myself. “We’re adding to what you have in order to improve,” Hakimzadeh assures me.

It’s not that I hated my teeth or even that they were in dire need of an adjustment. I just knew they could look better. I wore braces in middle school, underwent crown lengthening during the COVID-19 pandemic and recently completed Invisalign treatment.

After research on the procedure, particularly on dentists who could perform it, the clear choice was Apa Aesthetic in L.A.

During the initial consultation, Reyhani examined my teeth and got a clear explanation of what I was looking to achieve. “We have a very good idea of exactly where we need your teeth to end up,” he told me. “We know the color we are going to end up with and how long or how short the veneers need to be. We’ll use that guide to get us exactly where we need to finish.” 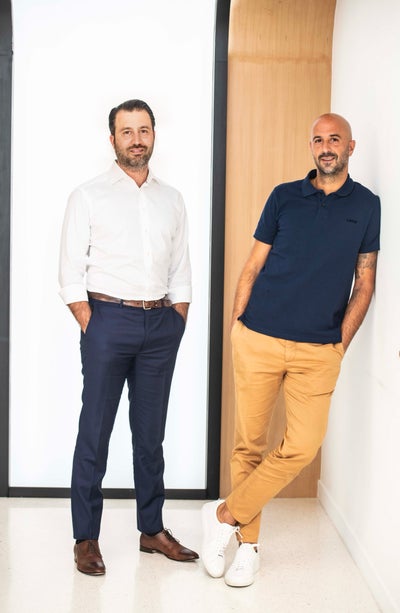 Reyhani notes that during these in-depth consultations, they often discover that a patient barely needs any work. However, that wasn’t the case for me. Granted, I didn’t require a full mouth of veneers. I was looking for smile-enhancing adjustments at both the top and the bottom.

Once we were aligned on the end goal, they took impressions of my teeth. On that same day, the master in-house ceramist crafted my temporary veneers and they were then applied. This is not necessarily common for the first appointment—but because I was commuting from out of town, the normal two sessions, separated by one to two weeks, were condensed into one.

After I received my temporaries, I was able to take my new teeth for a spin. This allowed me to check not only for aesthetics but for comfort. Did I like my new smile? Did it complement my mouth? Was I eating with ease? Were they white enough? Were they too white?

“The two dentists have assured me that so long as I take care of my veneers, brushing and flossing regularly, they also won’t change color during that time.”

I returned to L.A. for my final appointment with only one request for adjustment: that the finished smile be slightly whiter, but not too much whiter, as I wanted them to maintain the appearance of a natural smile. That’s exactly what I got, and after a journey of more than 15 years to achieving my best smile, I finally have it.

Nothing good lasts forever, so there will come a day when replacements will become necessary—but that’s no time soon.

“These will last 20-plus years,” Hakimzadeh says. “Typically, what you’ll see is as you age is, your gums recess more and you start seeing areas of teeth that may have been hidden before. Most of the time, when we change a patient’s veneer it’s because the patient just doesn’t like the aesthetics anymore as they’ve aged, not that the integrity of the veneer is bad.”

The two dentists have assured me that so long as I take care of my veneers, brushing and flossing regularly, they also won’t change color during that time. And while they did cost a pretty penny—depending on the market you’re in, a personalized, in-house–crafted veneer can run you anywhere from $2,000 to $5,000—in my case it was well worth the money. I have a smile that was custom-made for me and not anyone else. I received a top-of-the-line experience; and yes, I still have all my real teeth left.