Chrishell Stause has gotten caught up in some iffy cheating rumors thanks to Dancing With the Stars pro Gleb Savchenko splitting up with his wife Elena Samodanova—and she’s not thrilled.

Chrishell’s fellow Selling Sunset star Amanza Smith spoke about the rumors during an interview on FUBAR Radio (via Us Weekly), saying “Poor Chrishell. She was like, ‘I went through a very public divorce. Like, the last thing she would ever do is add to somebody’s infidelity if that’s what was going on.’ But that’s just how it goes when you are in the spotlight, but I think she’s pretty pissed off about it.… It sounds like maybe the wife is using this as, like, a cheap PR stunt.”

Elena has been pretty open about her issues with Gleb, directly accusing him of past and current infidelity during a conversation with People:

Meanwhile, Chrishell has denied rumors that she’s having an affair with Gleb, writing on Instagram Stories, “As you can imagine, the countless hours of training, and dance rehearsals has created a strong supportive friendship, but nothing more.” 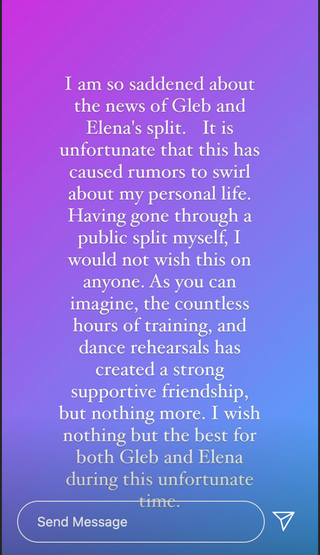 Truly can’t wait to get the BTS tea next season on Selling Sunset.