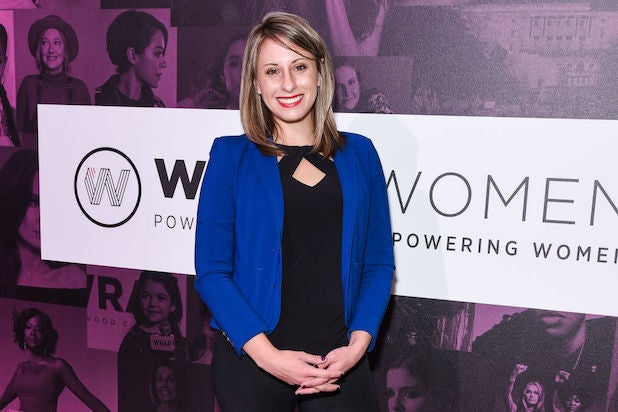 Reps for Jason Blum’s Blumhouse have remained mum after former staffers of disgraced ex-congresswoman Katie Hill sent out tweets objecting to an upcoming TV biopic based on Hill’s memoir.

Last week, Blumhouse TV announced Elisabeth Moss would produce and star in a biopic of Hill, a policy advocate from southern California who unseated Republican Rep. Steve Knight in the 2018 midterms — only to resign last October after accusations of inappropriate relationships with members of her staff.

In a series of tweets sent from Hill’s former government account on the same day the biopic was announced, Hill’s “former staff” said they were disappointed by Blumhouse’s plans to shoot a biopic they fear will portray Hill as a “hero” since it’s based on her 2020 memoir, “She Will Rise: Becoming a Warrior in the Battle for True Equality.”

“What happened to Katie Hill shouldn’t happen to anyone. But, this moment requires more nuance, as Katie Hill’s story — our story — is also one of workplace abuse and harassment,” the account tweeted last week. “Katie Hill can be both a victim and perpetrator. And, staff can experience severe consequences for speaking out against their powerful boss.”

The account continued, “No one should have to put themselves in harm’s way for the public to understand a simple truth: Katie Hill is not a hero for women. We deserve heroes who embody our values even in the most difficult moments.”

“Regardless of their author, the content of the hacked tweets is something talked about at length in my book, in podcasts and in countless interviews regarding my decision to resign, as well as the constant work and reflection I’ve done since then,” Hill added in a follow-up tweet the next day. “I look forward to continuing to have conversations around these issues and using my platform to support women in any way possible.”

Blumhouse also declined to comment. In announced the production last week, Blum said in a statement, “We pursued this project because we believe in Katie and her message of empowering women and breaking the system. And with Elisabeth and the force of what she brings on and off the camera, we hope this will be a powerful vehicle to inspire and for change.”

Read the thread below: