After Bob Odenkirk was rushed to the hospital on Tuesday July 27, while filming ‘Better Call Saul,’ his ‘Breaking Bad’ co-stars sent well-wishes.

Bryan Cranston, 65, and Aaron Paul, 41, both hoped Bob Odenkirk, 58, has a speedy recovery after the star collapsed on the set of Better Call Saul. Bryan and Aaron both made Instagram posts on Wednesday July 28 to send love to Bob, who they both acted alongside in the critically acclaimed AMC series, Breaking Bad, which Better Call Saul is a spin-off of. 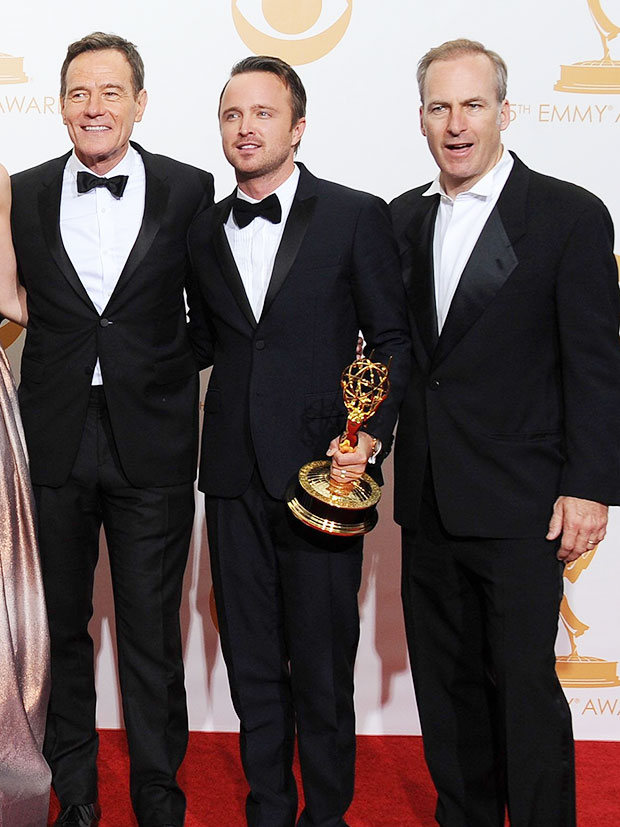 Both actors wrote sweet messages for their friend and co-star. Aaron’s post was very simple. He just shared a photo of Bob’s headshot, and wrote, “I love you my friend.” Bryan shared an old photo of himself and Bob at a Breaking Bad-related event. In the picture, Bob was wearing a gray shirt and black jacket, while Bryan sported a blue button down, blazer and jeans.

The Breaking Bad lead wrote a lengthy tribute to Bob and asked fans to keep the actor in their thoughts, as he receives medical treatment. Bryan said that he was “anxious” when he got the call about the Mr. Show creator. “My friend, Bob Odenkirk collapsed last night on the set of Better Call Saul. He is in the hospital in Albuquerque and receiving the medical attention he needs but his condition is not known to the public as yet,” Bryan updated fans. “Please take a moment in your day today to think about him and send positive thoughts and prayers his way, thank you,” he wrote.

Not much is known about why Bob collapsed on-set. He was filming the sixth-season of Better Call Saul, which is expected to be the Breaking Bad spin-off’s final season. Bob revealed that he doesn’t know how the show will end in a June 2021 interview with Esquire. “I’m going to be playing this character and we’re going to be shooting until November,” he said. “I already know what was happening, I would be depriving myself of so much excitement. I want for there to be a new thing every three weeks [when we’re filming] and to find fresh energy and excitement.”

Besides Better Call Saul, Bob had been keeping plenty busy. He had recently appeared in a new episode of the  Netflix sketch series I Think You Should Leave in July 2021. He is also gearing up to release a memoir in 2022, titled Comedy Comedy Comedy Drama.