Elvis Presley would love Nadiya Hussain. The King once jumped in his private jet at midnight and flew a thousand miles from his Nashville home to Denver, just to tuck into his favourite peanut butter, bacon and jam sandwich.

This 8,000-calorie treat is known as the Fool’s Gold Loaf and Elvis liked to wash his down with a bottle or two of champagne.

The Bake Off queen’s version, showcased on her latest cookery programme Nadiya’s Time To Eat (BBC2), is probably better enjoyed with a mug of tea, because it’s on her breakfast menu. 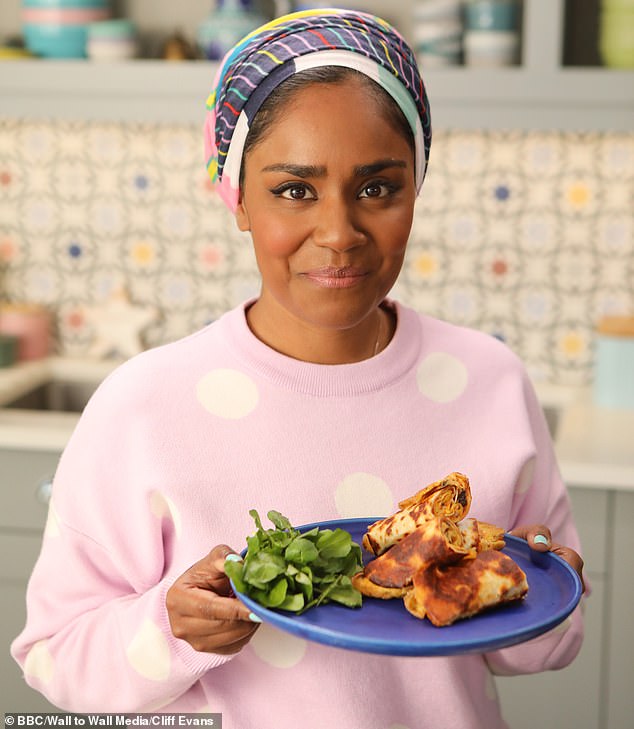 Nadiya’s Time To Eat (pictured) is probably better enjoyed with a mug of tea, because it’s on her breakfast menu

Take one lorryload of eggs, a churn of full-fat milk and whisk into batter before pouring it into a baking tray the size of a lifeboat.

Stir in shovelfuls of peanut butter and jam.

Bake for ten minutes, and slice into portions about the shape and weight of a house brick.

Basically, it’s a pancake you can make in a cement mixer.

‘I live to impress my kids,’ declared Nadiya happily. ‘ ‘Hi guys, look what Mummy did.’ ‘

One of the ideas behind this show is that the mother-of-three reveals her shortcuts for making impressive meals quickly with the minimum of preparation.

Grim reality of the night:

The Mbendjele people of the Congo jungle were struggling with delinquent teens, domestic violence and alcohol abuse in Extreme Tribe: The Last Pygmies (C4).

Wherever you go, the worst problems seem much the same.

The trouble is, it’s far from the only idea. We also see Nadiya visiting busy working mums and giving them tips on how to cut down the amount of time they spend in the kitchen.

That’s a lovely premise, good enough on its own to support a full series.

But there’s more: she also visits farms and factories, to see where our ingredients begin life.

This time, she was in a mushroom warehouse, filling crates for supermarket shelves.

Since Nadiya only has half an hour, it feels as if she’s trying to cram in far too much . . . as usual.

Time To Eat would work best if she stuck to the fast-and-tasty recipes — such as her DIY Pot Noodles.

Take one jam jar, stuff it with dried noodles and chopped veg, add a dollop of chilli paste and stir in boiling water.

Compared to some of her dishes, that’s positively health food.

Another gave me high cholesterol just looking at it: make an omelette, slap a disc of tortilla bread on it, flip it and fry it, then roll it up to devour.

The result looked like a sleeping bag squeezed into a rucksack. Slather it in peanut butter, and even Elvis would reckon that was a hefty snack.

There’s no shortage of ingredients in Red Rock (BBC1), the daytime tale of a crime family in an Irish coastal town, like The Sopranos shot in the low-budget soap style of Emmerdale. 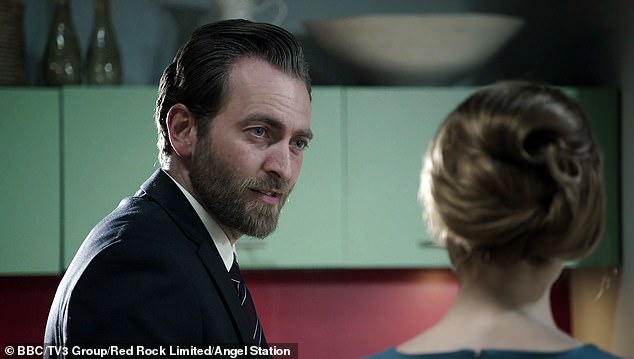 There’s no shortage of ingredients in Red Rock (pictured), the daytime tale of a crime family in an Irish coastal town, like The Sopranos shot in the low-budget soap style of Emmerdale

Drug dealing, murder and police corruption all play out in a series of living rooms, with actors gazing at each other motionless as they trade overwrought dialogue. This third series kicked off with the most confusing recap ever compiled — a melange of dream sequences, violence and shouting matches, all intercut with lots of people casting furtive and guilty looks at each other.

The main plot revolves around toe-rag Keith, or ‘Keet’ as everyone calls him. Keet’s dad, or ‘Da’, is on the point of turning him in to the police.

Garda sergeant Johno Baldilocks O’Riordan (Paul Hickey) is urging Keet’s Da to do it. ‘He’s involved,’ he said. ‘You know it. You know that I know it.’

He didn’t have to say that he knew Keet’s Da knew he knew it. We knew that.