The Stonehenge Enigma: What Lies Beneath?

Care for a drop of Louis Delaunay with your Christmas pud? Unless your refined palate might prefer a fluteful of Etienne Dumont.

Or I think there’s still a splash of the Jules Mignon . . .

Those elegant names sound so much more sophisticated than what they really are: own-brand champers from Tesco, Sainsbury’s and Morrisons.

Sabrina Grant and Sophie Morgan had fun, on Luxury Christmas For Less (C4), bursting the supermarkets’ bubble. Louis, Etienne and Jules, it turns out, are invented names, chosen to give a sheen to cut-price bottles of fizz. 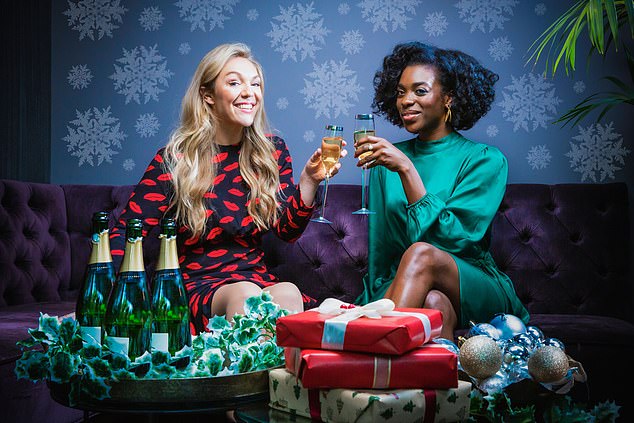 There’s psychology behind these aristocratic Gallic labels. They conjure the image of a family chateau, where peasants in berets wander through grapevines playing accordions — instead of a large, anonymous co-operative turning out fizz at 14 quid a bottle.

How much better a throat-blistering cider would taste if it came from a jug of Old Tom Jolly’s Mendip Scrumpy. And a non-alcoholic cordial might be more enticing if branded as Aunt Lavinia Butterworth’s Summer Sunshine.

Sabrina and Sophie must have let the pricey pop go to their heads, because some of their other suggestions for cutting corners at Christmas were charmingly daft.

Instead of buying cheap, bland cheese, for instance, we’d do better to lash out on something costly and pungent, and really mature — at least a year old. That way, so the logic goes, we eat less of it and end up spending less, too.

Shock recipe of the week:

Mary Berry showed us how to bake her favourite cake, a jam and cream sandwich, on Love To Cook (BBC2). The secret, she said, was not to use butter — instead, she took ‘baking spread’ straight from the fridge. That’s margarine to you and me.

Experience teaches you simply get fat, you develop indigestion and the fridge stinks for weeks.

Another amusing but dubious suggestion was to rent a tree instead of buying. You’ll pay about £45 for a six-footer and after the holidays you return it.

I’m not sure you’ll get your deposit back, though, when you show up at the farm with a bare stick and a Hoover bag full of pine needles. What are you supposed to do, glue them all back on again?

Sophie and Sabrina urged us to buy recyclable wrapping paper, so here’s my own tip. Don’t rip your presents open in a Christmas morning frenzy — unpeel each piece of Sellotape and fold the paper up to reuse next year.

Yes, my wife does always threaten me with divorce by lunchtime. How did you guess?

Prehistoric festive celebrations were uncovered by Rob Bell and a team of archaeologists in The Stonehenge Enigma: What Lies Beneath? (C5). No wrapping paper needed, but it helped if you had a pig and a bow and arrow.

Vast underground holes, long since filled in, but still retaining their smoothly rounded shape, have been discovered a few miles north of Stonehenge, at Durrington Walls. Historians believe this was the site of a Neolithic city, home to at least 4,000 construction workers who raised the gigantic monument.

What the holes are, and why they were dug out painstakingly with pickaxes made from red deer antlers, no one is sure.

But a probe into one pit discovered charred pig bones and stone arrowheads. The theory is that the workmen staged a ritual hunt, chasing the porkers and slaughtering them in front of a roaring crowd.

‘This was party city, not just a place where they were getting on with life,’ declared one professor. Think about that when you’re tucking in to pigs in blankets.