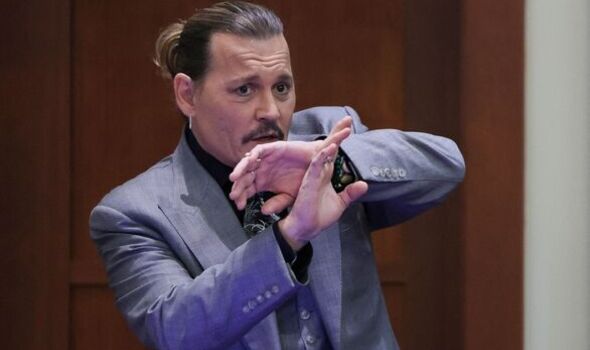 The message was one of a series of texts the Pirates of the Caribbean star sent to pals about the actress which were read to their defamation trial.

In 2015 after the two wed, Depp wrote: “I never ever want to lay eyes on that filthy w***e, Amber.” Her lawyer Ben Rottenborn said in crossexamination: “She was your wife at the time?”. Depp replied: “Correct.”

In another text, the actor called a woman an “idiot cow” and a “worthless hooker”, which led the attorney to suggest that the subject was Heard.

Depp, 58, was being questioned in his third day on the stand yesterday in his US civil defamation claim against Heard in Fairfax, Virginia.

The actor is suing her for more than £38million, saying her domestic abuse claims harmed his career and reputation.

Heard, 35, has filed a countersuit for almost £78million in damages, saying Depp’s lawyers falsely accused her of fabricating allegations.

Her claim accuses him of a “smear campaign” and calls his suit a continuation of “abuse and harassment”.

Depp admitted he took pills and cocaine with rocker Marilyn Manson several times: “I once gave Marilyn Manson a pill so he would stop talking so much,” he said, sparking laughter.

He credited Sir Elton John for helping him beat addiction demons, saying of the Rocket Man star: “I would have been swallowed up by the monster were it not for you.”

He added: “Elton is a dear friend, who has been sober for 40 years, 30 years, so we had a discussion and he wanted to get me clean.”

The seven jurors were shown a photograph from Heard’s Los Angeles house in March 2013, after Depp fell off the wagon. It showed two glasses of whisky and lines of cocaine next to a box with a skull and crossbones plus Depp’s initials on it.

Depp lost a libel case against The Sun’s publishers over a 2018 story which called him a wife-beater. Mr Rottenborn challenged him repeatedly yesterday, using the actor’s often contradictory testimony from then.

He pressed Depp on whether his father had ever abused him: “Walls weren’t the only things your father punched. He punched you in the face once and knocked you down?”

Depp had not mentioned that during questions from his legal team when he discussed his abusive mother and said his relationship with Heard had the same dynamic.

“Yes, when I was 15 years old,” the actor replied. “He had asked me to take the dog for a walk…or something meaningless. I just said ‘No’. He gave me a quick shot. Pretty hefty.”

The lawyer used a 2013 email Depp sent to Sir Elton to undermine his claim his children did not like Heard.

It read: “On the other side of the coin, my kids have fallen head over heels in deep love with Amber, my girl, and that pressure is off my shoulders, is f****** gone, that is until the French extortionist ex **** attempts to brainwash them against her.”

Vanessa Paradis and he agreed Depp had earlier testified that during his relationship with Heard his children had grown to dislike her.