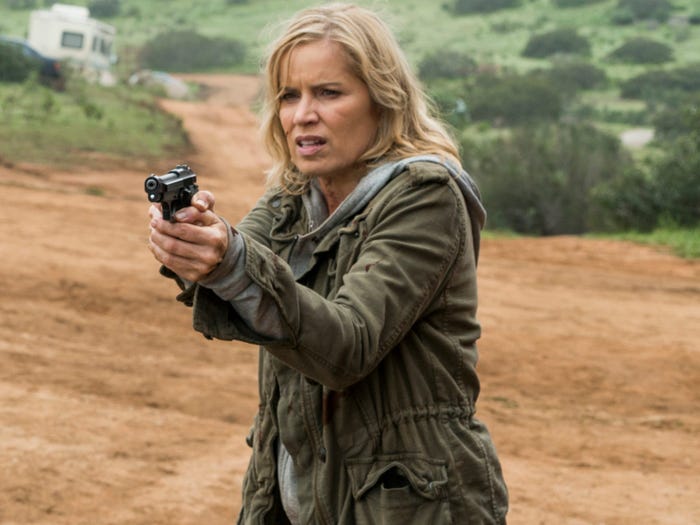 Is a "Fear the Walking Dead" fan favorite returning to the AMC zombie series? The showrunners are certainly giving us hope we could see Madison Clark (Kim Dickens) again one day.

When asked the chances of whether or not we'll see Dickens again — even if it were just in a flashback — co-showrunner Andrew Chambliss told Insider, "It's definitely something we talk about."

One of the former protagonists of "Fear," Madison was seemingly killed off the show in 2018. On season four's mid-season finale, aptly titled "No One's Gone," the show revealed that Madison sacrificed herself in order to save her friends and family.

The final time viewers see Madison, a herd of walkers is approaching her. Though we never see her on screen death, it was presumed she was torn apart by the undead.

Madison's death was a huge shock on the series, especially because Dickens told Entertainment Weekly it was "disappointing" and "heartbreaking" to learn about her character's demise. Dickens thought there were "so many more stories to tell" with her "ferocious" mama bear.

Since then, many fans have been holding out hope we may see her again one day on the "Walking Dead" spinoff. It's starting to sound like that may not be out of the realm of possibilities.

When asked point-blank if Madison is dead, Goldberg teased, "Well, we never saw her body."

"Madison herself said, 'No one's gone until they're gone,'" Goldberg added, referencing the final line of dialogue Madison said on the series to her children and friends before she lit a stadium full of the undead ablaze.

Dickens previously told MovieWeb she would be open to returning as Madison, saying she would "have to sit down and talk about it."

Whether or not Madison actually returns, AMC definitely seems aware that fans discuss the character a lot.

In October, Reddit user stephen6686 shared a screenshot of an AMC survey asking fans why they tuned into the season six premiere of "Fear TWD." Fans were asked to select all options that may apply from a rather lengthy list of. The fourth option read, "I want to see if Madison returns."

The network and show have appeared to be very receptive of fan criticism. Season six's anthology setup seems like a reinvention of the show after a particularly painful season five where many longtime fan-favorites were acting out of character (fans weren't particularly happy about Alicia painting trees for a season).

The current season is arguably the best the show has been since season three. That's not really a high bar since the past two seasons weren't well-received, but the series is surprisingly good right now. It's even fair to say it's great.

How and why could Madison return now?

Why would the "Fear" showrunners wait years to bring Madison back?

One of the main theories currently circulating around the fandom is that Madison is the mystery character who saved Morgan Jones (Lennie James) from a near-death experience at the end of season five.

Morgan was left a note in all capital letters reading, "You don't know me, but I heard you message. You need to do the same. You still have things left to do…"

One theory earlier this season was that Dwight's ex-wife Sherry saved Morgan. But when they recently met on season six, episode five, Sherry didn't appear to recognize Morgan. Could Madison be the person who saved Morgan? And, if so, why didn't she stick around?

Another way Madison could return: On another "TWD" spinoff.

Even if we don't see Clark return to the world of "Fear," "TWD" universe chief content officer Scott Gimple teased at New York Comic Con that it's possible we could see more of Madison on the upcoming anthology series, "Tales of TWD," which plans to revisit some moments from the past with former cast members.

In October, Ryan Hurst, who was recently killed off "TWD" teased we may see him again on that series, telling Insider, "I can neither confirm nor deny whether I had a long, long dinner with Scott Gimple, but that's pretty much all that I can say."

Chambliss and Goldberg are currently filming the backhalf of "Fear TWD." We expect the season to continue next April after "TWD's" six bonus episodes end their run.

You can follow along with our "Walking Dead" coverage here.