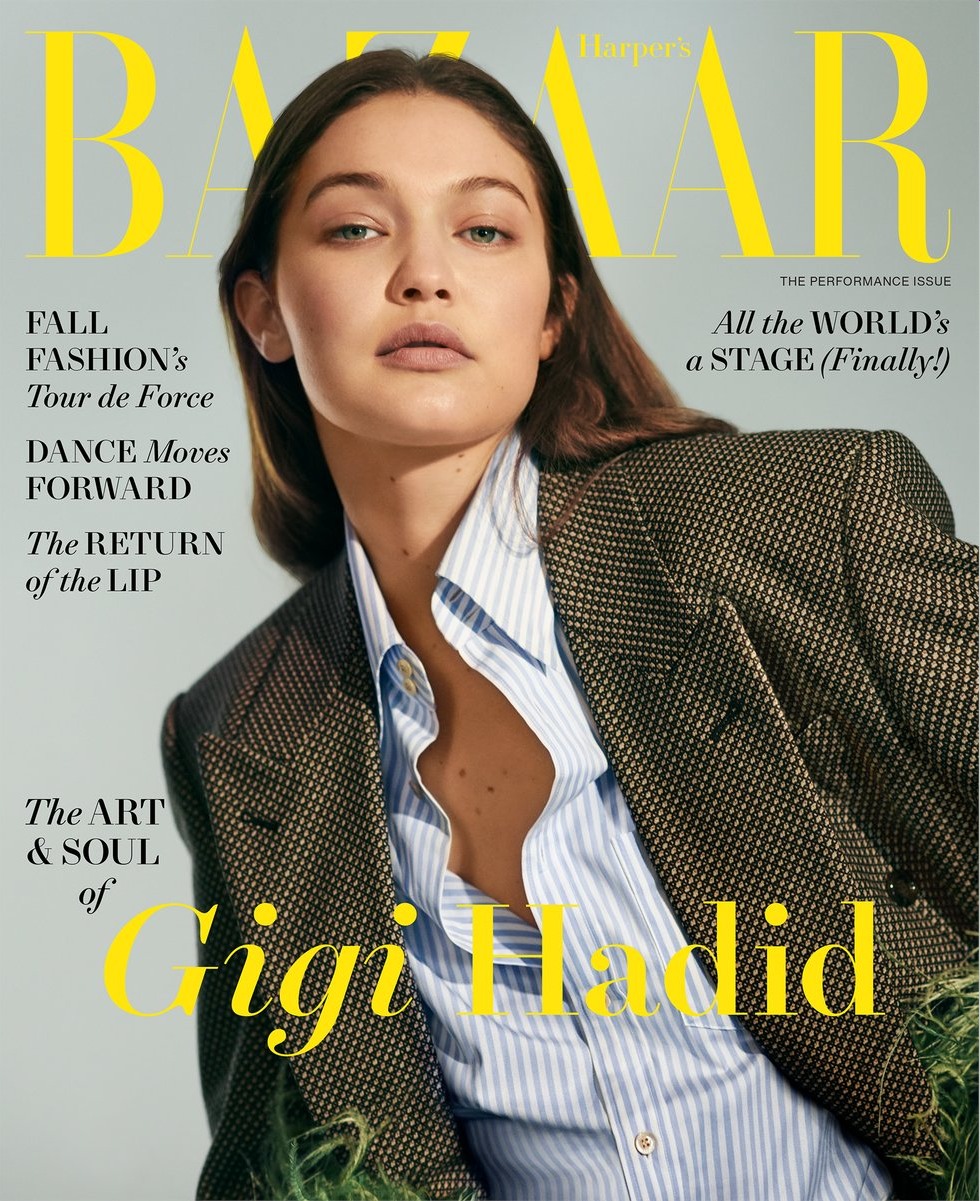 Gigi Hadid covers the latest issue of Harper’s Bazaar. The editorial is kind of blah (to me) but that’s because I’m not really fond of Gigi’s hair color these days. Plus, the clothes aren’t that great. The interview is nice though, and Gigi seems to be especially content these days. She gave birth to daughter Khai Hadid Malik last September and she’s taken a nice amount of maternity leave from her modeling career, popping up to an appearance here or there but mostly settled in her farm in Pennsylvania, which is adjacent to her mother’s farm. That’s where she was throughout the pandemic, and she gave birth at home on the farm too. You can read the full Bazaar piece here. Some highlights:

Spending time at the Pennsylvania farm: “It’s peaceful and recharging for me. I deal with a lot of things through just sitting and thinking and writing. People made jokes when Covid hit, like, ‘Oh, Gigi, you’ve been practicing quarantine for years now,’ because when I had a few days off, I would drive to the farm from the city and be with myself in my little cabin, making a resin chair or drying flowers.”

Family dynamics: “This is not to say that I don’t have a heart or Bella doesn’t have a brain, but when dealing with family stuff and world issues, my mom calls me the brain and Bella the heart. My brother is half and half. Whatever the family dinner-table discussion is, Bella will be very emotional and compassionate, and I’m sitting there pulling up charts and infographics, speaking very calmly. My mom is just very Dutch and to the point. And my dad’s a storyteller—a bit goofy, but always connecting it back to, ‘Oh, you’ve heard the old Palestinian saying …’”

How Zayn deals with her family: “At first he was like, ‘How do I get a word in edgewise?’ But now he is very comfortable. He speaks his mind. When he’s in the middle of a family thing and everyone’s like, ‘Zayn, whose side are you on?’ he’s charming. He’s usually on my mom’s side. So he’s smart in that sense.”

Dealing with backlash for supporting Palestine: “Anyone who is multiracial, or even if you aren’t, can feel different pressures from each community.”

She’s not going to say something just to say something: “This year I’ve talked to a lot of people who have been speaking, using their platforms. It’s nice when you get that kind of validation from friends for speaking on what you believe in. But then also not feeling a responsibility to do something that makes you feel unsafe.”

She keeps multiple journals: “During my pregnancy, I had one journal that I called my good journal and one journal that I called my bad journal. They weren’t that literal, but one was more for the memories, for Khai. Maybe one day I’ll give her the bad journal just to be real about it.” What was inside the “bad” journal? “Anxieties and days where I felt like, ‘Am I good enough to be a mom?’ I didn’t want to feel guilty about feeling those things or writing those things down. I just liked the separation. I also have sketch pads where I’ll watercolor-sketch, and sometimes I end up writing there too. I write on the back of receipts and keep those in a notebook. I’m not particular about it, and my journals are everywhere around the house. I just pick up whichever one is closest to me and write.”

Her relationship to mirrors: “I don’t spend a lot of time in the mirror at all. I brush my teeth in the shower in the morning. Or I usually look out the window.”

I used to brush my teeth in the shower to save time but I ended up getting annoyed with myself for doing that! Gigi also talks a lot about surrounding Khai with animals and taking her to the aquarium for the first time because Zayn thought Khai would love the fishes (she did). Gigi still sounds really blissed out from her country life, and the family she’s created with Zayn. I mean… in the back of my mind, I wonder if it will be all bliss and farm life when Zayn is touring or Gigi has to work back-to-back fashion weeks or whatever. But they’re rich, they’ll figure it out. And if they don’t figure it out… I’m not worried about Gigi. She seems fine either way.