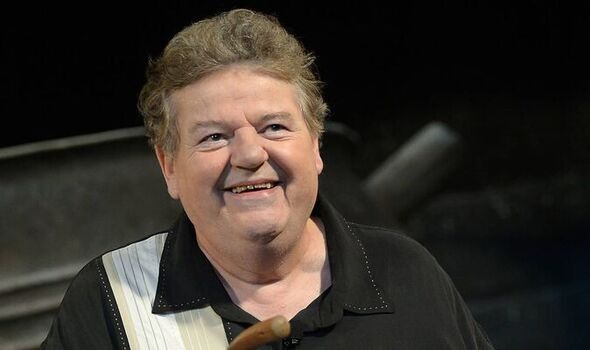 She added: “Robbie was a unique talent, sharing the Guinness Book of Records’ Award for winning three consecutive Best Actor Baftas for his portrayal of Fitz in Granada TV’s series Cracker in 1994, 1995 and 1996 with Sir Michael Gambon.

“He will probably be best remembered for decades to come as Hagrid in Harry Potter. A role which brought joy to children and adults alike all over the world prompting a stream of fan letters for over 20 years.

“For me personally, I shall remember him as an abidingly loyal client as well as being a wonderful actor, he was forensically intelligent, brilliantly witty and after 40 years of being proud to be to called his agent, I shall miss him.”

“He was an incredible talent, a complete one off, and I was beyond fortunate to know him, work with him and laugh my head off with him.”

Daniel Radcliffe has recalled his Harry Potter co-star as “one of the funniest people”.

Daniel said while filming Prisoner of Azkaban “we were all hiding from the torrential rain for hours in Hagrid’s hut and he was telling stories and cracking jokes to keep morale up”.

Comedy star Stephen Fry tweeted: “I first met Robbie Coltrane almost exactly 40 years ago. I was awe/terror/love struck all at the same time.”

Fellow Blackadder star Hugh Laurie recalled riding in his “sort-ofrestored MGA”. He said: “I don’t think I’ve ever laughed or learned so much in my life.”

Bond producers Michael G Wilson and Barbara Broccoli also paid tribute to Robbie, who starred as Valentin Zukovsky in GoldenEye and The World Is Not Enough. They tweeted: “We shall miss him as a dear friend.”

Robbie was made an OBE in the 2006 New Year’s honours list and he was awarded the Bafta Scotland Award for outstanding contribution to film in 2011.

Born on March 30, 1950, in Rutherglen, Scotland, he was the son of a GP, Ian McMillan, and teacher and pianist Jean Howie.

He was educated at Glenalmond College, an independent school in Perthshire, and went on to Glasgow School of Art.

Only in his 20s did he move into acting, taking the stage name Coltrane, a tribute to jazz saxophonist John Coltrane.

He secured a role in BBC comedy series A Kick Up The Eighties, which brought him further roles in The Comic Strip Presents movies The Supergrass (1985) and The Pope Must Die (1991).

He also memorably appeared as dictionary creator Samuel Johnson in Blackadder The Third in 1987.

Python star Eric Idle was his opposite number in Nuns On The Run (1990).

In his later years, he appeared less frequently but in HBO’s Harry Potter 20th Anniversary: Return To Hogwarts he said: “The legacy of the movies is that my children’s generation will show it to their children, so you could be watching it in 50 years’ time easy.”

“I’ll not be here sadly… but Hagrid will.”

The actor is survived by his two children and their mother Rhona Gemmell.