The former senior White House adviser in Trump’s administration will continue to support her father ‘outside the political arena’ while she’s focusing on her family.

AceShowbiz –Ivanka Trump takes a step back from politics as her father, Donald Trump, confirmed he’s running for president again. Wishing to “prioritise” her children and continuing to lead a “private life,” the former senior White House adviser in Trump’s administration will not be involved in his latest campaign to run for the White House in 2024.

“I love my father very much. This time around, I am choosing to prioritize my young children and the private life we are creating as a family. I do not plan to be involved in politics,” Ivanka announced on Instagram.

“While I will always love and support my father, going forward I will do so outside the political arena. I am grateful to have had the honor of serving the American people and I will always be proud of many of our Administration’s accomplishments (sic).” 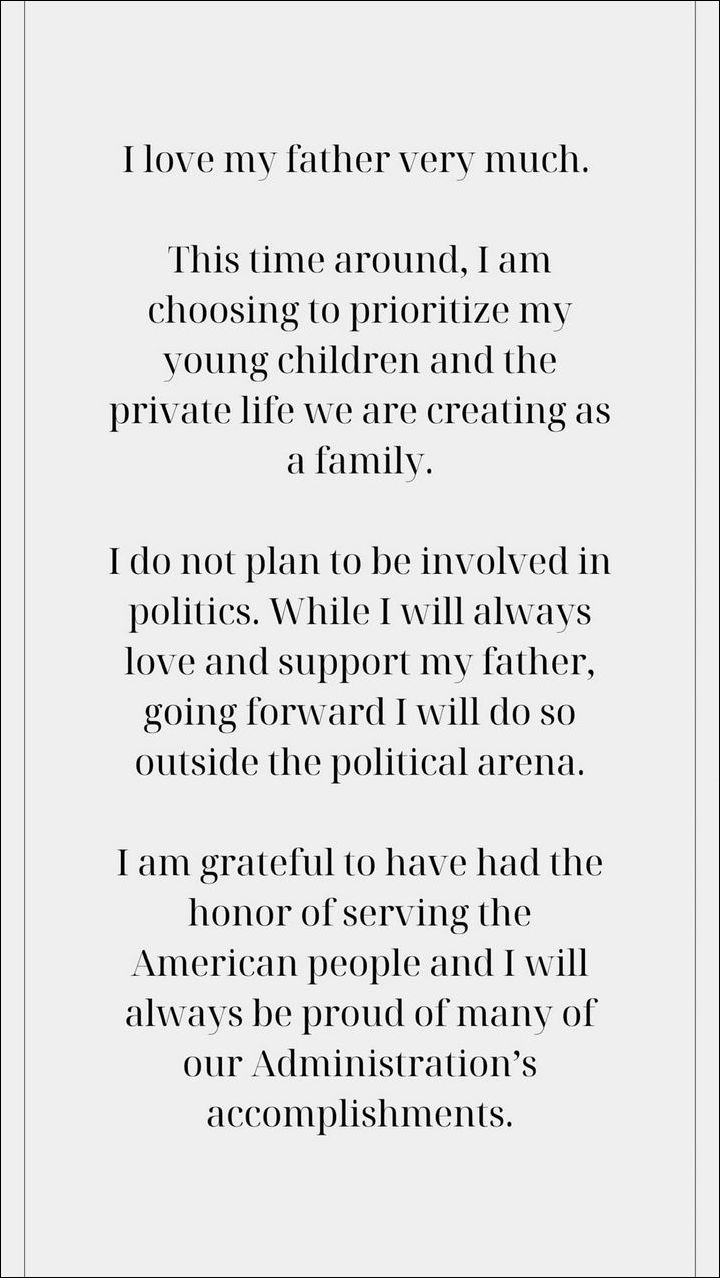 The 41-year-old businesswoman’s spouse, Jared Kushner, also acted as a senior White House adviser, but it’s not known if he will continue in the role.

The former United States President – who previously held office from 2017 to 2021 – promised to “fight like no one has ever fought before” during an impassioned speech at his Mar-a-Lago estate on Tuesday night, November 15. He said, “In order to make America great and glorious again, I am tonight announcing my candidacy for president of the United States.”

Trump, 76, took aim at current president Joe Biden, saying the country had endured “pain, hardship, anxiety and despair” under his leadership. He added, “Two years ago we were a great nation and soon we will be a great nation again.”

His paperwork to confirm his candidacy – which comes after some of his aides and allies urged him to wait until after the midterm election results – was filed with the Federal Election Committee just before his speech. This marks Trump’s third run for the presidency after he won in 2016 and then lost to Biden four years later.

He is the only president to be impeached twice, with the first coming in 2019 after the House of Representatives impeached him over his dealings with Ukraine. The following year, he was acquitted by the Senate and then, in January 2021, he was impeached again and charged with “incitement of insurrection” over the Capitol riot.

Trump – who is also the first president to be acquitted twice – had insisted without evidence that the 2020 election was stolen from him and his followers then stormed the Capitol building in an attempt to stop Congress from certifying the results in Biden’s favour.

Trump – who lost by more than seven million votes and hasn’t been able to provide evidence of widespread fraud – has continued to claim he won the 2020 election.