Less than two weeks after Kasmira Nash was tragically killed over the Kentucky Derby weekend, the ‘Whats Poppin’ rapper breaks his silence and vows to make Louisville a better place.

AceShowbiz –Jack Harlow has finally addressed the fatal nightclub shooting involving his DJ. Shortly after DJ Ronnie Luciano was charged with the murder of Kasmira Nash, the “Whats Poppin” rapper made a return to his social media account to share his thought over the tragic incident taking place over the Kentucky Derby weekend.

“My heart is broken by the events that occurred over Derby weekend,” the 23-year-old MC issued a statement via Instagram Story on Wednesday, May 12. “My heart breaks for Kasmira, her children, and everyone else touched by this tragic death. My heart breaks for my city, a place that’s been through too much pain already.”

Harlow went on to note that he has got in touch with the victim’s family and was grateful of their willingness to talk. “I’ve been in touch with Kasmira’s family during this unimaginably painful time, and I’m grateful to them for keeping the lines of communication open,” he stated. “Nothing can reverse what happened.”

On the effect of the fatal incident, the “Tyler Herro” spitter acknowledged, “Too many lives have been changed forever.” He went on to share his goal for the future. “My life will remain committed to making Louisville a better place,” he concluded his lengthy message. 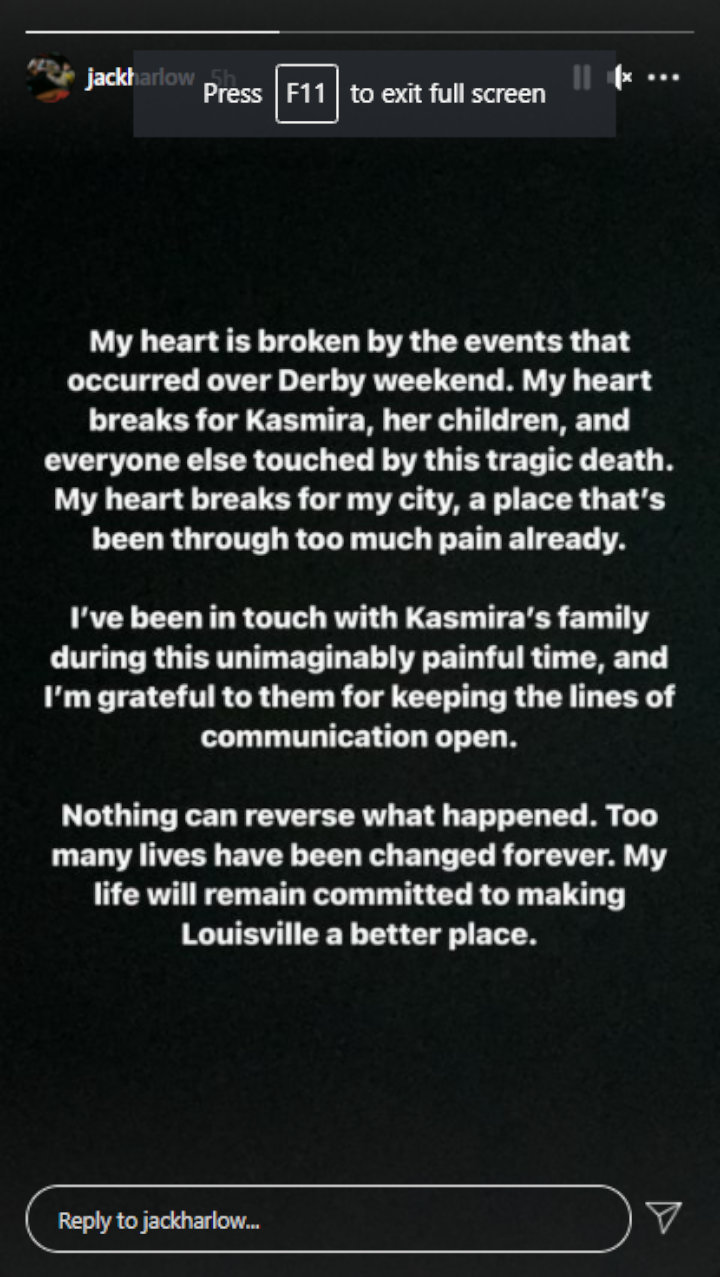 Harlow’s statement came one day after Luciano was indicted on charges of murder and tampering with physical evidence. He was accused of fatally shot 37-year-old Kasmira during a party at the Vibes Restaurant and Ultra Lounge on River Road on May 1. He surrendered to local police on Tuesday afternoon.

Luciano has since been held at the Louisville Metro Department of Correction with bond set at $500,000. Meanwhile, formal arraignment is expected to take place in Jefferson Circuit Court on May 17. To WDRB O’Bannon, his attorney Rob Eggert expressed confidence that the DJ will be exonerated, stating that he will not plead guilty to the charges.

Harlow himself was reported to be hanging out at the nightclub when the fatal shooting occurred. A video obtained by TMZ captured the rapper standing near the stage holding a glass of a drink. When a gunshot rang causing panic among the crowd, the Grammy-nominated artist was seen running away from the chaos.