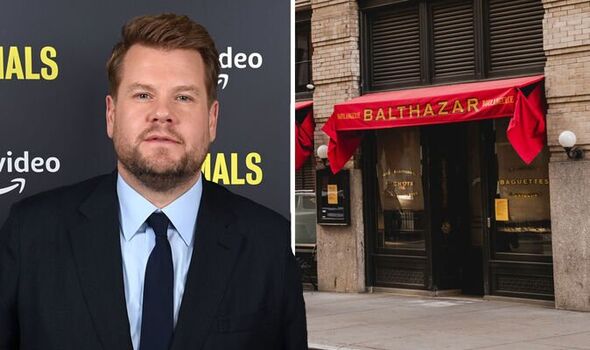 James Corden has been branded a “tiny cretin of a man” by restaurant boss Keith McNally who briefly banned him from upmarket eatery Balthazar. In his latest post, the restaurateur told his Instagram fans that he’s forgiven the chat show host after claiming he was rude to staff on two occasions.

In view of his 76,000 followers, he wrote: “James Corden is a hugely gifted comedian, but a tiny Cretin of a man.

“And the most abusive customer to my Balthazar servers since the restaurant opened 25 years ago.

“Here are two examples of the funny man’s treatment of my staff.”

Keith claimed that the first incident was back in June when James complained about hair being in his food.

He alleged that despite “Balthazar manager G” being apologetic, the presenter was “extremely nasty” to them.

James apparently said: “Get us another round of drinks this second. And also take care of all of our drinks so far.

“This way I write any nasty reviews in yelp or anything like that.”(sic)

James Corden announces he is leaving the Late Late Show

In another post, Keith claimed James complained about food again when he visited the restaurant with his wife earlier this month.

He said: “James called their server, M. K. and told her there was a little bit of egg white mixed with the egg yolk. M. K. informed the floor manager, G.

“M.K. was very apologetic and brought G. over to the table. He returned the dish, and after that, everything was fine.

“He gave them promo champagne glasses to smooth things out. G. said that Corden was pleasant to him but nasty to the server.”

The report added that M.K was “very shaken” but continued her shift.

According to the restaurant boss, James has since “apologised profusely” over his alleged behaviour.

“I strongly believe in second chances,” the restaurateur wrote in his latest post.

He joked that if he could present The Late Late Show for nine months, he would drop the ban.

“No, of course not,” he continued. “But… anyone magnanimous enough to apologize to a deadbeat layabout like me (and my staff) doesn’t deserve to be banned from anywhere.

The chat show host is yet to address the alleged claims publicly but continued with his chat show as normal on Monday.