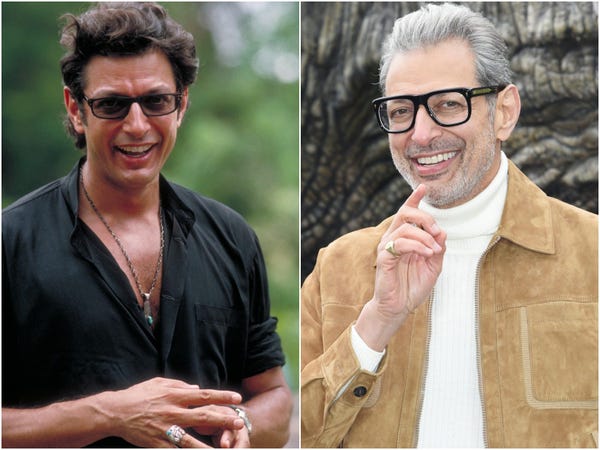 Actor Jeff Goldblum re-created a scene from the original "Jurassic Park" movie to thank fans who registered to vote.

Goldblum, who starred as Dr. Ian Malcolm in the 1993 film, posted a photo of himself on Instagram on Friday re-creating one of his character's famous moments.

Goldblum is pictured lounging with his shirt unbuttoned and his chest exposed.

WOW! Thank you to everyone who used my @HeadCount page to make sure that you’re #GoodToVote! Nearly 3,000 of you are ready for this November’s election. Here’s your reward…how time flies. @jurassicworld 🌋🦖🇺🇸

The original scene features Goldblum playing an injured Dr. Ian Malcolm, who reveals scratches on his chest as he reclines on a table in an underground bunker.

Goldblum's open shirt moment became so popular that it inspired countless memes, and in 2018, a statue of the actor in the pose from "Jurassic Park" was built in London to commemorate the film's 25th anniversary.

Goldblum posted the photo to thank 1,000 fans who registered to vote, checked their voter registration status, or requested a mail-in ballot via a link in his Instagram bio.

"WOW! Thank you to everyone who used my @HeadCount page to make sure that you're #GoodToVote! Nearly 3,000 of you are ready for this November's election. Here's your reward…how time flies," Goldblum captioned the post.

The actor linked to HeadCount, a national non-profit and non-partisan organization that encourages people to vote.

"If 1,000 of you register to vote, or check your registration status, or request a mail-in ballot (use the link in my bio!) I will re-create a classic Dr. Ian Malcolm moment from Jurassic Park," he wrote on Instagram.

Dern, Goldblum, and Neil star in the upcoming movie "Jurassic World: Dominion," which is set to premiere in theaters in June 2022 at the time of writing.

In August, Goldblum told Insider's Jacob Sarkisian that the first scene he shot in "Jurassic World: Dominion" was with Dern and Neil.

"The first thing that we shot … it was a scene with me and Laura Dern and Sam Neil and we were — I can't tell you much — but we were all day in a very tight, enclosed space," Goldblum said.

Representatives for Jeff Goldblum did not immediately respond to Insider's request for comment.