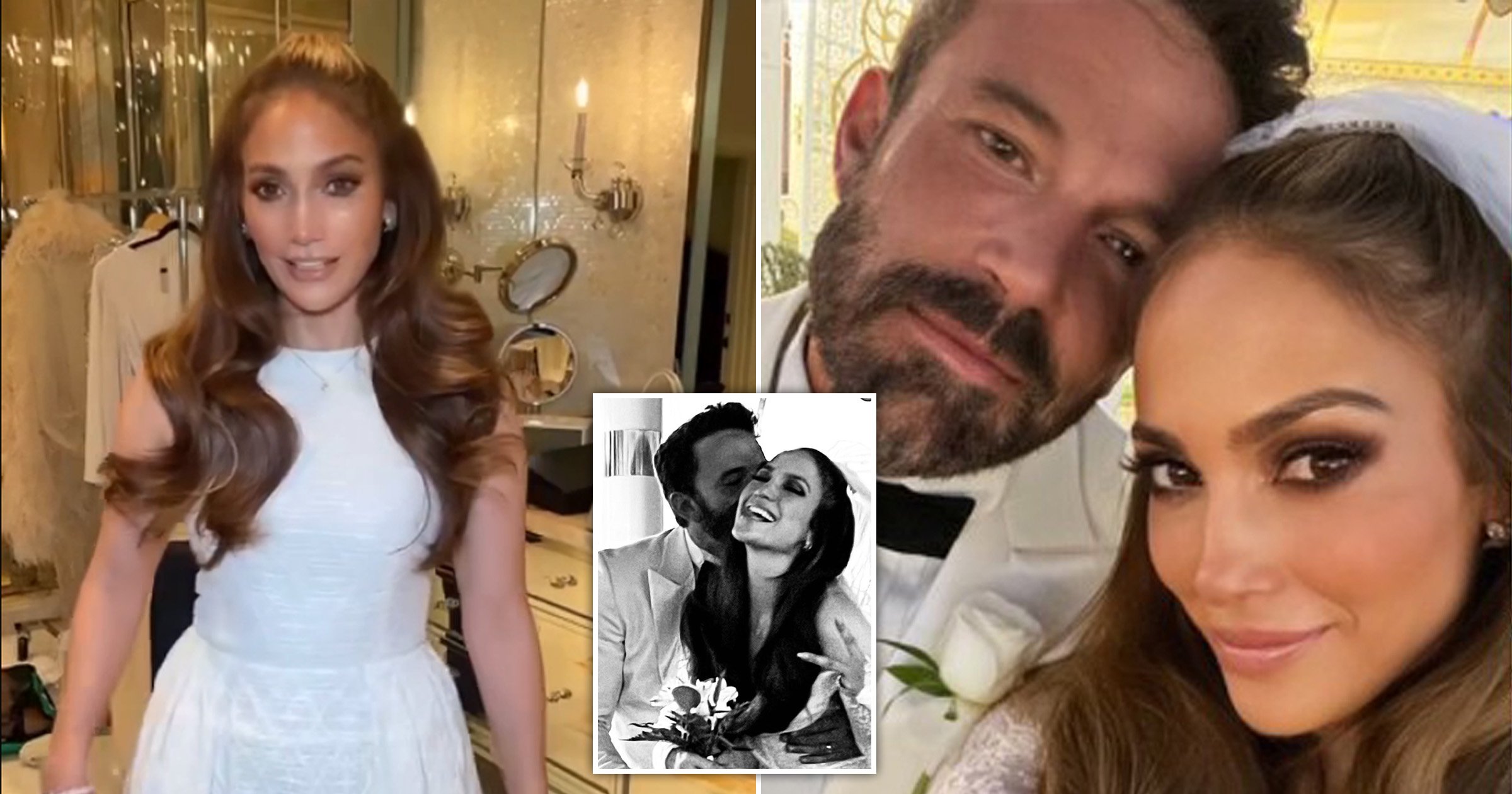 Jennifer Lopez married Ben Affleck in a dress she’d saved ‘for years’ from ‘an old movie’ in a win for recycling outfits.

The Marry Me star tied the knot with the Batman actor on Saturday in a low-key wedding in the famous Little White Wedding Chapel in Las Vegas and gave the world a few glimpses into the ‘best possible’ day the pair could have ever imagined.

Jennifer shared details in her On the JLo newsletter, which included some snaps and videos of her classic, boatneck gown – revealing she’d saved it from an old film.

‘So with the best witnesses you could ever imagine, a dress from an old movie and a jacket from Ben’s closet, we read our own vows in the little chapel and gave one another the rings we’ll wear for the rest of our lives.

J-Lo – now J-Fleck, we should say – continued: ‘They even had Bluetooth for a (short) march down the aisle. But in the end it was the best possible wedding we could have imagined.

‘One we dreamed of long ago and one made real (in the eyes of the state, Las Vegas, a pink convertible and one another) at very, very long last.’

She also thanked the venue ‘for letting me use the break room to change while Ben changed in the men’s room.’

The singer and actress, 52, who first got engaged to Ben, 49, in 2002 before they split in 2004 (before rekindling their romance last year), changed into a gorgeous lace off-the-shoulder dress designed by Zuhair Murad, with a corset bodice and fishtail train with matching veil.

The star also reflected on the next chapter of her life.

She added: ‘We did it. Love is beautiful. Love is kind. And it turns out love is patient. Twenty years patient…

‘They were right when they said, “all you need is love”.

‘We are so grateful to have that in abundance, a new wonderful family of five amazing children and a life that we have never had more reason to look forward to.’

News of their wedding first broke after their official marriage license, which was filed Saturday, was posted in the Clark County Clerk’s Office online records database.

The Hustlers star announced her engagement in April by sharing a video of herself wearing an engagement ring via her newsletter. She also had a diamond ring emoji as part of her Twitter handle.

‘Saturday night while at my favorite place on earth (in a bubble bath), my beautiful love got on one knee and proposed [sic],’ she said in her newsletter video.

The two, who starred in flop film Gigli in 2003 and 2004’s Jersey Girl, had a highly publicised relationship during the early 2000s.

After getting back together in 2021, they made several high-profile public appearances together in the first three months of the reunion, which included the red carpet for Ben’s December release The Tender Bar and for her February 2022 movie Marry Me.

Ben was previously married to actress Jennifer Garner in 2005 and shares daughters Violet, Seraphina and son Samuel. They divorced in 2018.