Family man! Kelsey Grammer was casual-cool as he took his brood out for a treat.

Kelsey Grammer, 66, looked like quite the proud papa while out with his wife Kayte Walsh, 42, and their 3 kids on Tuesday, Dec. 28. The Frasier made the most of the post-Christmas haze with a family ice cream run. Kelsey looked quite stylish in a plaid shirt, white tee shirt, and shorts with a bandana around his neck.

Doing double duty, the Cheers actor held on to 7-year-old son Kelsey Gabriel’s hand while juggling an ice cream cone in the other hand. He and Kayte’s eldest Faith, 9, walked ahead independently while mom looked breezy in a pink sundress and long cardigan as she walked youngest son Auden, 5, by the hand, carried an ice cream, and held onto the family dog’s leash. 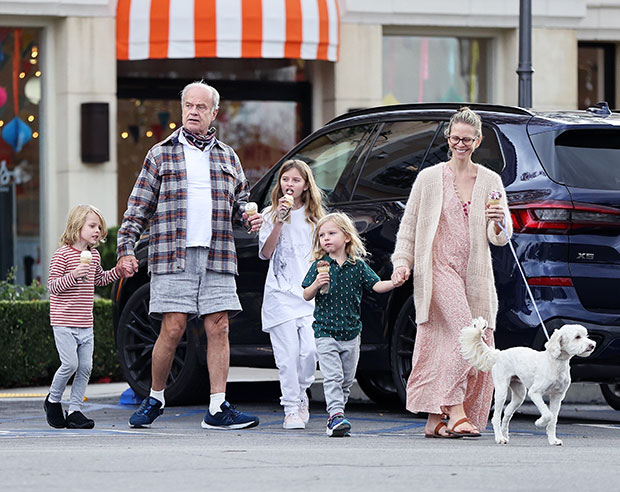 Kelsey made headlines when it was he announced he will return as Fraiser Crane in the upcoming reboot of the beloved sitcom. He lead the original show from 1993 to 2004 for 11 seasons during primetime on NBC. Fraiser was a spin-off from the classic bar comedy Cheers, following the pretentious psychiatrist character after he moves home to Seattle, Wash. A quirky hit, Fraiser also featured the talents of Jane Leeves, David Hyde Pierce, Peri Gilpin, and the late John Mahoney. No casting further casting news has emerged.

Celebrating the news with The Hollywood Reporter in Feb. 2021, he said, “I gleefully anticipate sharing the next chapter in the continuing journey of Dr. Frasier Crane.” He went on, “Having spent over 20 years of my creative life on the Paramount lot, both producing shows and performing in several, I’d like to congratulate Paramount+ on its entry into the streaming world.”