The Grammy winner, 33, confirmed her relationship status in an Instagram Story post on Friday, October 18. “An about to be married woman and me, a single lady,” she captioned a photo of her and pal Sarah Nicole Tanno at the latter’s bachelorette party. “Also thanks @hauslabs for the makeup.” 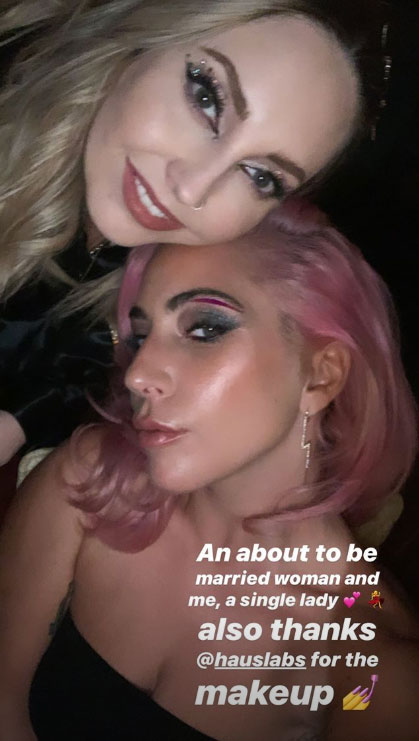 The breakup comes nearly three months after Gaga was first spotted kissing Horton. The two locked lips while out to brunch in Studio City, California, in July. The singer “was smiling a lot and laughing,” an eyewitness revealed to Us at the time. “They were talking with their faces close and holding hands a little at the table.”

The monitor engineer began working with the A Star Is Born actress in November 2018 before she launched her Enigma residency in Las Vegas.

The duo mostly kept their romance private. However, Gaga gave fans a peek at one of their date nights in September. “The @dhortonaudio special,” she wrote of an Instagram Story pic of a candlelit dinner, adding 14 red heart emojis.

The Oscar winner and Horton enjoyed a The Cure and The Pixies concert in Pasadena, California, in August. Gaga beamed in photos obtained by a Twitter user. “I love the cure, felt my old self come alive tonight what a show,” she captioned an Instagram Story video from the event.

She later shared a second clip, adding, “When music is magic.”

Us confirmed in February that Gaga split from fiancé Christian Carino after two years together. She briefly addressed her broken engagement during her Jazz and Piano show in June. “Last time I sang this song, I had a ring on my finger, so it’ll be different this time,” she said before her performance of “Someone to Watch Over Me.”

The exes were not exactly on good terms after their breakup. “She’s been hounded by Christian,” a source told Us in April. “She told him not to contact her.”

Gaga was also engaged to Taylor Kinney from February 2015 to July 2016.

Horton, for his part, was previously married to actress Autumn Guzzardi from March 2013 to May 2018.

With reporting by Brody Brown