Talk about BFF goals! Lisa Kudrow and David Schwimmer are back together again, reuniting to watch the premiere of the ‘Friends’ reunion on HBO Max.

David Schwimmer and Lisa Kudrow not only reunited for the Friends: The Reunion, but also for a sweet IG selfie on the day the special dropped. Lisa, 57, took to Instagram on May 27 to share a photo of herself smiling beside David, 54, and we can’t believe Phoebe Buffay and Ross Geller, are back together. “Tonight….That’s how long we waited to get together,” she captioned the post. “Thanks @_schwim_.”

In the comments section, the actors’ fellow Friends costars also reacted to the happy snap. “Love you two so much!,” Jennifer Aniston wrote, adding a red heart emoji, whileCourteney Cox commented, “Awww I love you guy[s]!!!” beside five red heart emojis. Thousands of fans also chimed in, “Best viewing buddies ever! I’m still emotional,” one follower wrote, while another said, “I love u guys! This reunion made my day, my week, my year a lot better.”

Friends: The Reunion was hosted by James Corden. It saw the show’s six lead cast members — along with co-creators Marta Kauffman and David Crane and executive producer Kevin Bright — share a number of behind-the-scenes stories from the sitcom’s 10 seasons which ran from 1994 to 2004. At one point, David said, “We had amazing guest stars on our show. I couldn’t believe all these people that we were all massive fans of.” 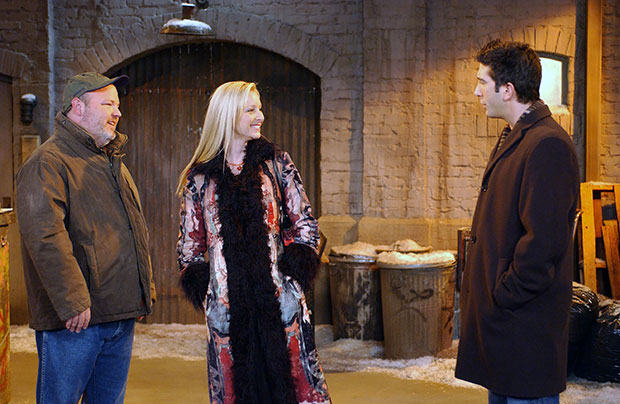 The cast remembered Danny DeVito, Ben Stiller, and Julia Roberts before David chimed back in, “Your fella, Brad [Pitt], did one,” referencing to Jen, as she added, “Pitt came, did one.” The A-lister guest-starred in a 2001 episode as a former classmate of Ross, Rachel, and Monica’s who formed the “I hate Rachel” club in high school with Ross.

HollywoodLife spoke to co-creator David Crane back in October 2019, and he revealed that Brad was initially hesitant about his guest-starring role. “I think [there was] a little bit [of hesitation],” David told HL. “Only because he’d never done TV in front of an audience, and it’s a very specific skill set. I think it’s probably a little intimidating if you haven’t done it before.”