Machine Gun Kelly’s set at the Louder Than Life festival didn’t go entirely as planned. Along with getting pelted by boos during his performance, MGK ended up getting into a physical scuffle with a fan.

Things got a little heated towards the end of Machine Gun Kelly‘s appearance at the Louder Than Life festival in Louisville, Kentucky, on Saturday (Sept. 25.) As MGK, 31, was wrapping things up and walking near concertgoers, an unidentified man got up and pushed Kelly. In footage taken of the interaction, concert security quickly got between the fan and Kelly. While the crew escorts the shover off the stage, the “Papercuts” appears to take a swipe at the fan before finishing his song. It’s unclear if the singer’s fist connected with the fan.

MGK clearly didn’t connect with some of the other fans in attendance. Rolling Stone notes that, per reports and videos taken at the gig, a “serenade of boos and middle fingers” greeting MGK “after every song” that he performed. Some fans attempted to start a “You Suck” chant for MGK before playing his song, “Concert For Aliens.” After completing the song, he was greeted by some boos. “Fuck yeah, dude. Everyone f-cking get on the fucking shoulders of some strong, sweaty guy and fucking crowd surf up here,” MGK tells the crowd, who continues to boo him some more.

However, if you ask MGK, he said he had a good time. One fan countered responded to Loudwire’s coverage of the incident by tweeting a video. “Here is the crowd singing along with no boos for @machinegunkelly. I’m a far bigger Slipknot fan than MGK fan, but come on with the relentlessly boo’d headline.” MGK retweeted the video, along with a comment. “I don’t know why the media lies in their narrative against me all the time, but all I saw was 20,000 amazing fans at the festival singing every word and 20 angry ones.”

Loudwire reported that the “multiple fan-shot videos…indicate there were far more than 20 disgruntled fans who were responsible for the resounding boos.” The publication also noted that “MGK used much of his time on stage to engage in verbal altercations with members of the crowd.”

The Louder Than Life incident comes less than a week after taking a shot at Slipknot during Riot Fest in Chicago. Slipknot and MGK were playing their sets simultaneously on different stages, and during his Sept. 19 set, MGK took a moment to say, “Hey, you want to know what I’m really happy that I’m not doing? Being 50 years old wearing a f-cking weird mask on a f-cking stage.” The jab was supposedly a response to a February interview that Slipknot’s lead singer, Corey Taylor, did where he called out “the ‘artists’ who failed in one genre and decided to go rock — I think he knows who he is. But that’s another story.” 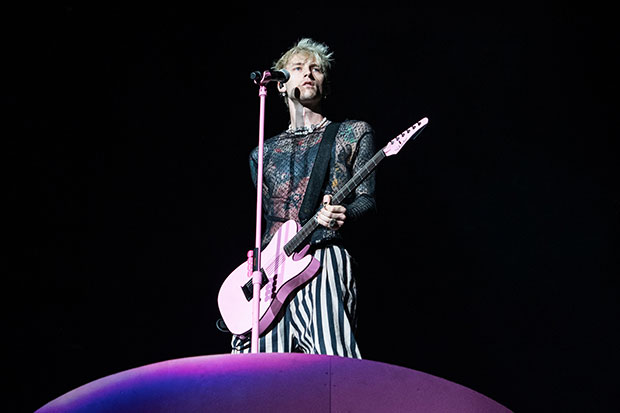 Following the Riot Fest shade, MGK took it a little further. “Corey did a verse for a song on [Tickets to My Downfall],” he tweeted. “It was fucking terrible, so I didn’t use it. He got mad about it and talked shit to a magazine about the same album he was almost on. yalls stories are all off. just admit he’s bitter.” Corey then responded with two screenshots of emails between him and Travis Barker (who produced and played on Downfall, showing that Corey professionally backed out of the collab when he felt like he was “the right guy for the track.”)

“I don’t like people airing private sh-t like a child,” Corey tweeted with the screenshots. “So this is all I’ll say: I didn’t do the track because I don’t like when people try to ‘write’ for me. I said NO to THEM. So without further ado…. #receipts. This is all I’m going to say about it.”