Married At First Sight UK stars Adam Aveling and Tayah Victoria have reassured fans they are safe and well after a fire broke out near their home due to the heatwave.

The reality stars, who met on the 2021 series of the E4 dating series, sparked concern among their social media followers when they shared scenes of a huge fire raging in fields behind their home in Doncaster.

Hundreds of firefighters have battled blazes across the UK on the hottest-ever day, with the country registering record-high temperatures after reaching 40.3°C, which is the first time the UK has ever passed 40°C.

On Tuesday afternoon, Adam and Tayah both shared video clips of smoke billowing across their back garden.

‘Fields on fire at the back of my house. Wow it’s hot,’ Adam wrote, while Tayah captioned her Instagram story: ‘Please stay safe everyone. We have a field fire right by our house at the moment.’

Adam later returned with footage shot while he walked through the garden, and told followers: ‘Update: Been evacuated by police.’ 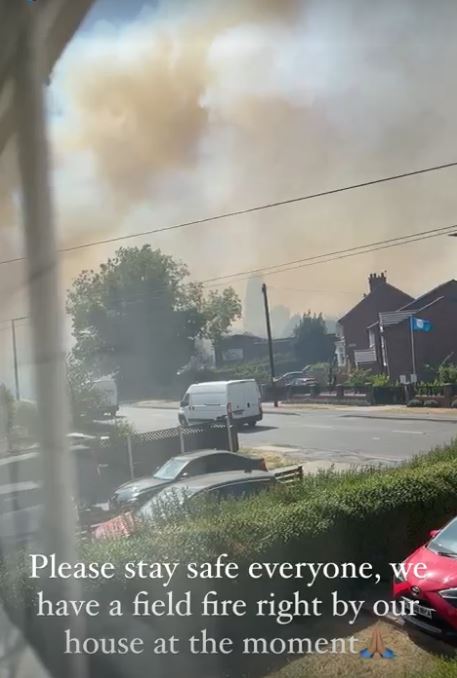 He then shared a photo of a nearby road barely visible through thick smoke, while the sky was tainted orange.

‘This photo is literally outside my house,’ he revealed.

Alongside footage of a clearer sky, Adam later said: ‘Update: Fires have mainly gone out. Luckily stopped just before my shed. Some neighbours weren’t so lucky.’

Celebrities have otherwise been finding ways to enjoy the sun but also keep cool, with stars like Gemma Collins, Jamie Redknapp and Amanda Holden whipping out paddling pools, BBQs and bikinis in their gardens.

However, others like Rylan Clark have admitted to struggling under the record-breaking temperatures.

The Celebrity Big Brother winner said what many of us have been thinking as he shared a snap of the 37.5°C on his thermometer, writing simply: ‘P**s off’. His venting didn’t stop there, as Rylan shared a voice message on Twitter after waking up this morning, saying: ‘Urgh, it’s proper warm, innit? Jesus.’