Meghan Markle and Prince Harry made a triumphant return to New York on Monday, where the Duke of Sussex delivered a keynote speech on Nelson Mandela International Day at the UN.

But following the special meeting, the duo went their separate ways and used their time in the Big Apple to catch up with friends.

Meghan, 39, wasted no time and after a quick change of wardrobe, headed for lunch with activist Gloria Steinem.

The Duchess dazzled in navy blue shorts, a white shirt and a brown belt and matching shoes whilst she held hands with Gloria whilst leaving the Crosby Street Hotel in Soho.

Later, the mother-of-two was filmed getting into her car, having helped Gloria get into hers, and stopped to take a selfie with a fan.

The Duchess also interacted with the paparazzi, thanking them for welcoming her to New York.

“Hope you enjoyed New York, good to see you in New York, Meghan,” one photographer could be heard saying, to which Meghan simply replied, “Thank you,” with a big smile. 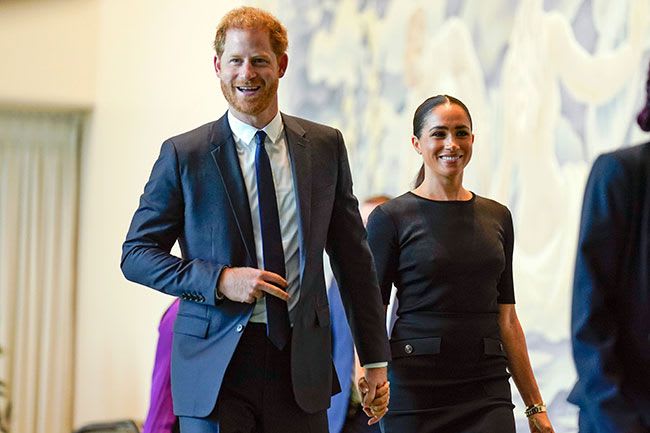 Meghan and Gloria’s friendship was first revealed during the pandemic, after they both united to “discuss representation, why each vote matters” and how all women “are linked, not ranked,” ahead of the US elections.

The duo also recently participated in a Vogue interview about the overturning of Roe v. Wade.

“[Gloria] reminds me that when you have anger, you have to channel that energy into something that makes a difference,” Meghan said during the interview. “That’s what activism is. It’s about how we show up.” She added, “I always look at things with the undercurrent of hope. If you are someone who truly believes that there can be something better, if you’re someone who sees injustice, you have a choice: You can sit there and be complacent and watch it, or you can say, ‘What can I do to get us to the other side of this?’”