Do you find yourself strangely attracted to Hopper and his dad bod? Have you taken to dressing like you’re living in the 1980s? Do you drink only New Coke even though it’s objectively disgusting? Diagnosis: You’re obsessed with Stranger Things and fully wish the show were real. Sadly/thank-god-because-monsters, it’s not—but! Nancy and Jonathan are dating IRL and have been since season 1.

And while their relationship is extremely low-key, much like my smoldering attraction to Billy’s mullet, it’s also extremely cute. Let’s dive into it.

Fine, they’re with friends, but still—fans are immediately like:

A few days later, Charlie shows up on Natalia’s IG. In other words, the plot thickens.

Wow congrats @charlie.r.heaton on his new one man show Stranger Wings!! Sure gonna miss you s2 but happy you're doing what you love??❤️

Wow congrats @charlie.r.heaton on his new one man show Stranger Wings!! Sure gonna miss you s2 but happy you’re doing what you love🙏🐦❤️

At this point, the fandom is thirsting, much like the Demogorgons thirsted on everyone’s internal organs in season 2, so Charlie and Natalia literally start trolling the world with matching IG posts (a year apart, but still).

They even do Halloween together! Although, fine, it was technically a group costume.

Natalia and Charlie are spotted leaving LAX and naturally, everyone is like, SEE I KNEW IT, RECEIPTS! 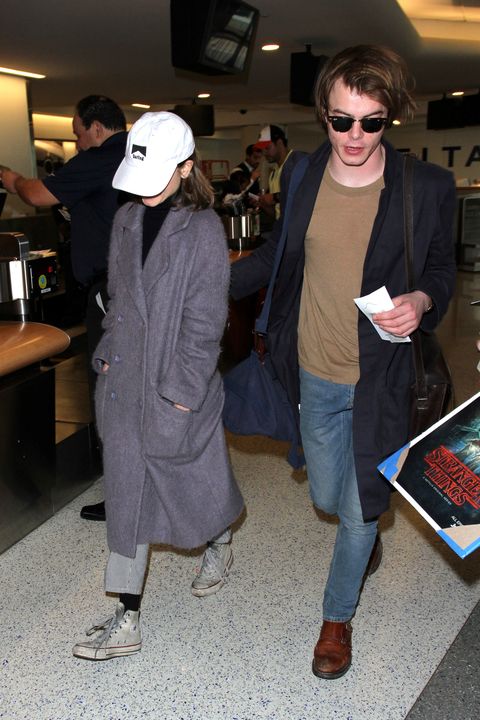 Charlie has fans even more convinced they’re dating when he posts a photo of himself wearing Natalia’s shoes:

@nattyiceofficial Need my converse back!

@nattyiceofficial Need my converse back!

Natalia and Charlie post pics on the same day and everyone assumes they’re hanging out.

crafternoon with some old Brit

crafternoon with some old Brit

At this point, it’s like, friends…let’s stop this charade. The game is up.

TMZ catches Natalia and Charlie at the airport, and—due to having zero chill and not knowing how to read a room—asks point-blank if they’re dating. Natalia’s non-answer? “Whether people are dating or just hanging out, I think our cast is just cool with each other.”

Natalia and Charlie essentially confirm they’re a couple when they’re photographed holding hands while walking down the street: 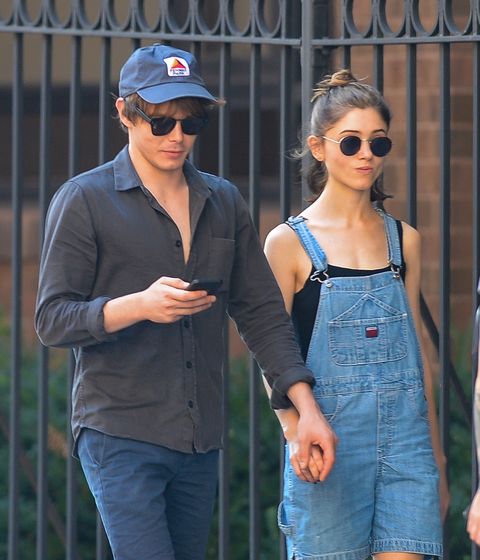 And then they’re spotted looking deeply emo and tortured in Paris: 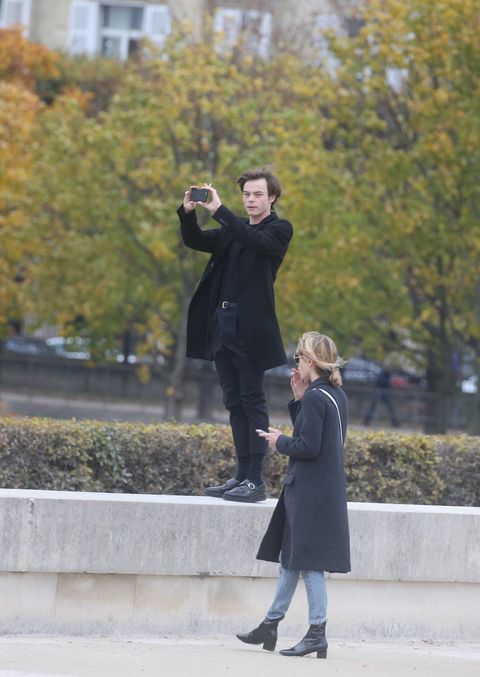 And then they’re spotted kissing, which quite literally seals the deal. 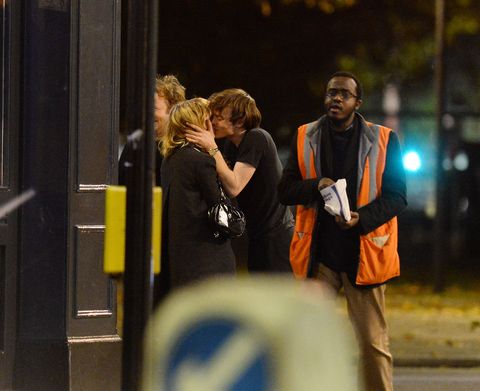 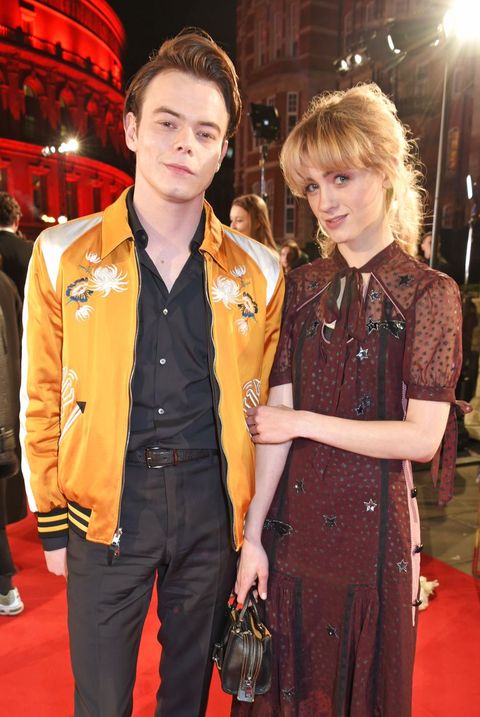 Charlie wishes Natalia a happy birthday with the cutest, flirtiest post ever:

Happy 21st birthday! @nattyiceofficial I hope it’s a great one and I’m stoked to be working on this new series with you. I think it’s gonna be great. ????? P.S – Not feeling too well but I still wanna meet you at piedmont park tonight x

Happy 21st birthday! @nattyiceofficial I hope it’s a great one and I’m stoked to be working on this new series with you. I think it’s gonna be great. 🎂🎉🥂🙏🏻 P.S – Not feeling too well but I still wanna meet you at piedmont park tonight x

Tabloids report that the couple has broken up, with a source telling Life & Style, “Charlie broke it off with Natalia. She’s heartbroken. She doesn’t know what went wrong.”

Well, L-O-freaking-L, because that same day, Charlie and Natalia are spotted at the Dior Addict Lacquer Plump event at Poppy in Los Angeles (sorry, no pic, but they were there!).

And then the next month, they hit up Coachella together, along with literally every other celebrity ever.

Charlie Heaton and Natalia Dyer at Coachella on April 15, 2018 pic.twitter.com/LaEUS7zBLQ

And finally, they go IG-official on Charlie’s feed.

And then they show up on a red carpet doing whatever this cute thing is with their hands: 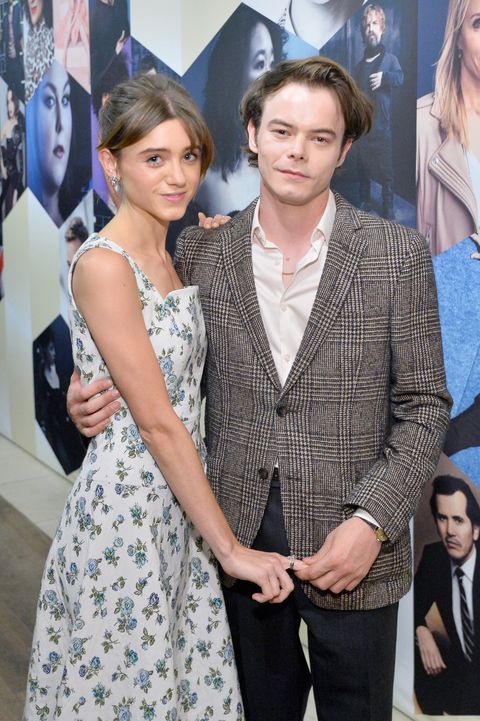 Now that the floodgates are open, Charles talks about dating Natalia to V Man, saying, “You can break the walls down with your partner. Because we work in the same industry and have had similar trajectories, we’ve gone through it together. Sharing that does bring you closer. They understand something that maybe no one else would. You go into high-pressure situations together but you can share those insecurities or whatever they are. The great, happy times too…really f*cking sweet!”

Natalia gives a rare quote about Charlie, telling Refinery29, “It’s an interesting thing to work with somebody who you go home with. It’s always really fun. We’re really comfortable with each other. So we can play and feel more free, and we can talk about it before.”

Charlie and Natalia show up for the premiere of Stranger Things 3, looking very much like a couple: 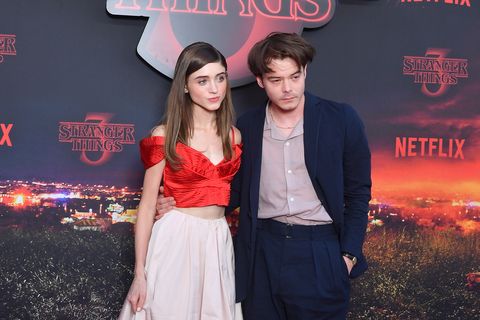 And that’s it, but fear not, we’ll be updating this timeline with new developments.