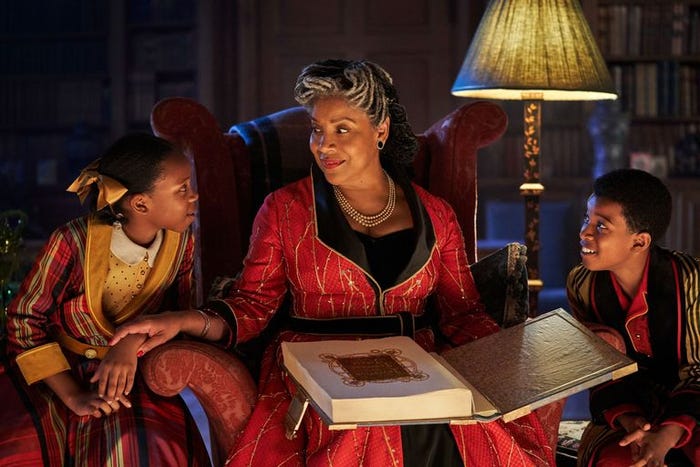 Filmmaker and playwright David E. Talbert is fresh off the release of his new Netflix musical "Jingle Jangle: A Christmas Journey."

During a recent interview with IndieWire, Talbert said that the inspiration for the film came after failing to share some of his own favorite family musicals like "Willy Wonka & the Chocolate Factory" and "Chitty Chitty Bang Bang" with his 4-year-old son.

"He just wasn't into it at all," Talbert said, and after a while, he abandoned the films and asked if he could go and play with his LEGOs.

"As he walked away, I looked at him, I looked at the screen, and I realized he doesn't see himself in the film," Talbert continued. "But this was my childhood because there were no other options for diversity of representation on the screen at the time.

"He has Black Panther and Miles Morales on his wall. So that's when I thought, it's time to do it, because if my son is experiencing this, how many sons and daughters of color around the world want to see themselves represented as well?"

As a result, Talbert decided to write and direct "Jingle Jangle" —  Netflix's first original live-action holiday musical — and the film stars a predominantly Black cast including Anika Noni Rose ("The Princess and the Frog"), Forest Whitaker, Keegan-Michael Key, and Phylicia Rashad who Insider spoke with about the project.

During the wide-ranging interview, Rashad said that working on the film was a wholly unique experience. "I'd never seen anything like it in my life," she said.

Talbert also told IndieWire that he originally approached both Universal and Disney with the film, and they liked the idea but ultimately decided to not moving forward, allowing Netflix to step forward.

"Netflix is a global company, so they understand that there are people of color all around the world. They want to reach those people, and so they took a big bet on me," he said. "Now, the path to get it to the stage is obvious, and that's what I am gearing up for: a perennial Broadway production of 'Jingle Jangle.'"

The 101 best movies to watch on Netflix right now

110 movies you need to see in your lifetime