Nicki Minaj has seemingly taken offense to ‘Bang Bang’ collaborator Jessie J’s comments about how the rapper ‘asked’ to join the hit song.

Nicki Minaj has taken to the internet to clear the air about her song “Bang Bang” with Jessie J and Ariana Grande. The rapper, 38, issued a response to Jessie J’s recent feature with Glamour published on Thursday, Aug. 5, in which the English singer-songwriter, 33, dissected some of her greatest hits. When Jessie mentioned that Nicki asked to get on “Bang Bang,” the rapper seemingly took offense.

Jessie’s quote in question read, “Max Martin wrote ‘Bang Bang,’ and Ariana had been played it, I’d been played it, and we both loved it. We just said, ‘Why don’t we both do it?’ So Ariana stayed on the second verse, I recorded the first verse, and then Nicki was played it in the studio and was like, ‘I’ve got to jump on this.’ We didn’t go to her and ask; she wanted to do it.”

Nicki shared a screenshot from the interview and responded: “Babe @JessieJ I didn’t hear the song & ask 2get on it. The label asked me2get on it & paid me. How would I have heard the song?” She added, “What am I the damn song monitor? Snoopin around for songs chile?” Noting that “this was said by another artist recently as well,” Nicki added, “Y’all gotta stop.” 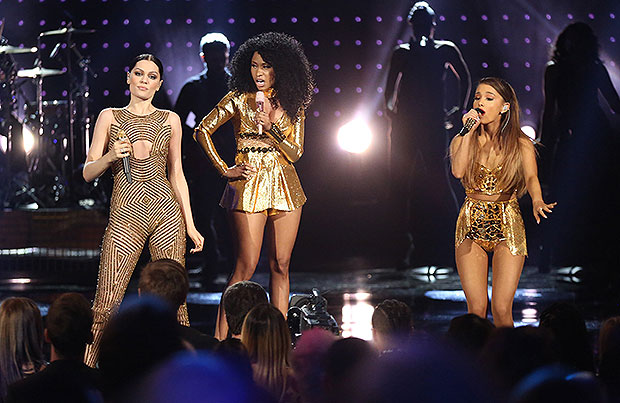 Regardless, it did not sound like her collaborator meant any ill will with the statement, as she gushed about the collaboration during the interview. “I’ll never forget: I was in my bedroom in my flat in London, and I got sent the version with Nicki on it,” Jessie continued. “I just sat at the end of my bed holding my phone, staring at the floor, going, ‘How the fuck did I land this?’ I literally felt like I’d won a competition.”

The singer added that the song “would have never done what it did without” her collaborators, citing “girl power.” She said, “The gratitude I have and, honestly, the experience of girl power. Since Moulin Rouge, there hasn’t really been a big female song that’s come that’s really impacted like that.” Jessie added, “Me and Ari just spoke the other day, and I was like, “We should definitely do something together.” And she was like, “If we do, it has to be better than ‘Bang Bang.’” And I was like, ‘Well…’ She was like, ‘I don’t know’ … because it’s just one of those songs that just caught and went.”