The ‘Walk Em Down’ spitter sends social media users confused after claiming that he’s told by his ‘ancestors’ to take a shower in the rain, claiming he ‘felt so good afterwards.’

AceShowbiz –NLE Choppa is embracing the nature in a new video, but not everyone is feeling it. The young hip-hop star, whose real name is Bryson Lashun Potts, has been heavily trolled online after he shared a video of him showering in the rain.

The Memphis rapper claimed he was told by his “ancestors” to take a bath in the rain. After documenting it in a video, he took to Twitter on Wednesday, October 12 to share the clip along with a brief explanation.

“Today my ancestors told me to take a shower in the rain, so I did,” he captioned it. “It actually makes sense how shower heads replicates rain, and a bath tub replicates a body of water. Also looked up benefits of rain water for hair and skin and found many benefits. I felt so good afterwards!”

In the video, NLE Choppa is seen naked on the upper half of his body, revealing an array of tattoos on his chest, arms and back. His body was drenched as he rubbed his hair, face and body with his hands quickly, before walking off the camera.

After watching the clip, people had some questions regarding NLE Choppa’s hygiene standard. “Did they tell you to use soap?” one person asked. Another similarly inquired, “Did he use soap? Or the ancestors said aht aht? .. I’m confused.” A third remarked, “He just moving the dirt around.”

Another doubted that NLE Choppa received the words from his “ancestors” as he claimed. “No sometimes he just be saying anything no one told him that,” said the user. One other mocked him, “He be trying way too hard to seem like this enlightened being, bro why are you naked in the rain.”

“If yo water off just say that,” someone enthused. Another warned the danger of taking a shower in the rain, “The rain collects all of the pollutants in the air as it falls toward earth but if that’s what gets his goose, then he should go for it. There are worse ways to harm yourself.”

There were a few who agreed with NLE Choppa though, with one fan arguing, “You find peace When your in touch with Nature.” 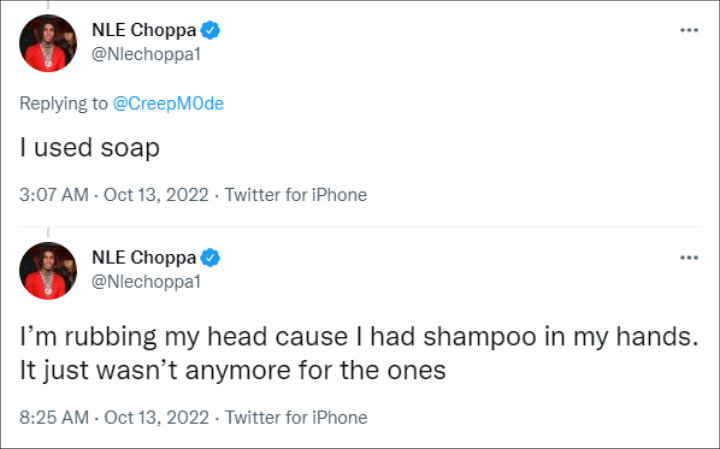 NLE Choppa responded to some questions regarding his showering in the rain video.

Noticing the backlash, the 19-year-old star took the time to respond to some of the comments. “I used soap,” he insisted in one reply. He also claimed that he was using shampoo in the video, adding, “I’m rubbing my head cause I had shampoo in my hands. It just wasn’t anymore for the ones.”