President Trump revving up for a legal battle over the election is already triggering peaceful protests across the country … and it’s feeling like an eerie, relative calm before the storm.

Hundreds of protesters made their voice heard loud and clear late Tuesday night into Wednesday morning outside the White House. The demonstration went down while the election results were still very much up in the air — and before Trump’s controversial speech — with the majority of the crowd being Joe Biden supporters — but a handful were there to back the current Prez.

Nothing got out of hand, though, as many had anticipated. Much of Washington D.C.’s business district has been boarded up this week, but cops say they only made 4 arrests related to the protest. 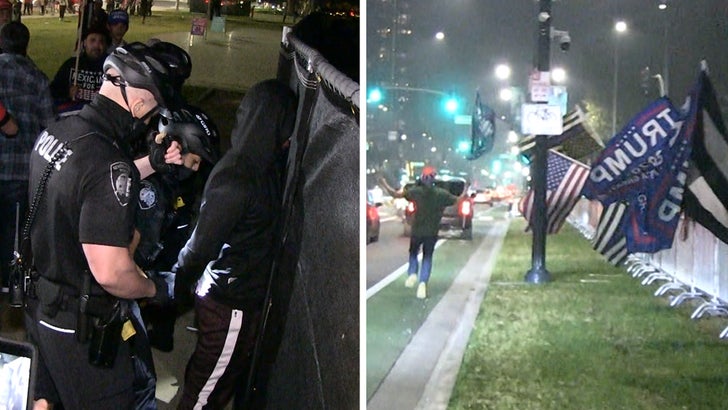 As we’ve been reporting … Beverly Hills was also bracing for the worst on election night, and a huge crowd of Trump supporters did line Canon Drive in that city.

The protesters were definitely loud, but there was no violence … with cops only detaining one person there. Meanwhile, it was a little tenser in downtown L.A., where around 40 people were arrested after the LAPD declared an unlawful assembly.

Cops say the people who got busted were blocking train tracks and failed to disperse.