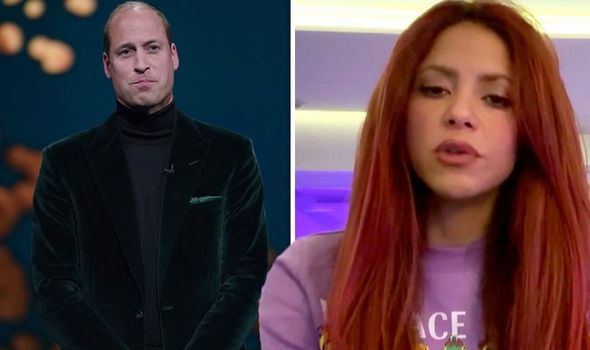 Shakira, 44, has been very open about her blossoming friendship with Prince William. In a new interview with Glamour UK, the singer expressed her admiration for the Duke of Cambridge and his devotion to world change.

Adam Peaty and Katya Jones ‘told off’ during Strictly rehearsals

Shakira has worked with Prince William’s Earthshot Prize Council, saying of it: “Seeing Prince William’s passion and how genuinely determined he is to provoke change is very, very inspiring.

“It’s just incredible to see how committed he is, and all the people at Earthshot are, to make change happen in the world in such a short amount of time.

“And it’s not impossible. It requires many of us, plenty of commitment and determination and we need to raise awareness towards that.

”The singer and songwriter who fronts Glamour UK’s debut environment issue talked about how her children are the reason she signed up for the Earthshot prize.

She said: “Seeing them so worried, so concerned about the planet and how they can make this a better place has been so inspiring to me as a mother.

“As a parent, I want to make sure that they will live in a world that will be better than the one I grew up in.”

The Earthshot prize awards will continue once a year from 2021 until 2030.

The goal of Earthshot is five-fold: to protect and restore nature, revive our oceans, to clean our air, build a waste-free world, and fix our climate.

The Colombian singer also talked about the discrimination she faced when entering the music industry.

She commented: “I remember when I had my first big break in music outside Colombia, there were many double entendre comments about what it meant to be Colombian, and usually associated with drug trafficking, all of that.

“It’s like, we’re always the joke, it was uncomfortable.”

She also spoke openly about confidence and self-doubt.

Shakira said that most of her image is an outward show of confidence, but inside she still feels insecure, saying she has a “duality”.

She added: “It’s weird, because sometimes I feel really empowered that I can do it all.

“It never happens, though, without me going through a process of self doubt

She also talked with Glamour UK about a big beauty mishap

Shaun Ryder speaks out about health condition amid late diagnosis

Shakira told a story about how she was dying her hair the night before the super-bowl, and was met with some chagrin as a result.

“That night, my hair decided to turn black! It was [also] my birthday. It was almost midnight.

“And of course, the next day I had to be up and ready and perfect and fresh.

“But no, of course there had to be some kind of drama, especially before the Super Bowl! I was freaking out”