On the one-year anniversary of Britain’s first pandemic lockdown, Queen Elizabeth II marked a National Day of Reflection Tuesday by sending flowers and a graceful note to the London hospital that took care of husband Prince Philip during his recent hospitalization.

According to St. Bartholomew’s Hospital, an NHS facility that specializes in heart treatment, the queen sent the gifts to pay tribute to the staff there and to frontline workers in general.

The bouquet, made up of irises, tulips, mini daffodils and ranunculus, was delivered from Windsor Castle, where both the queen, 94, and her husband, 99, are sheltering during the pandemic. 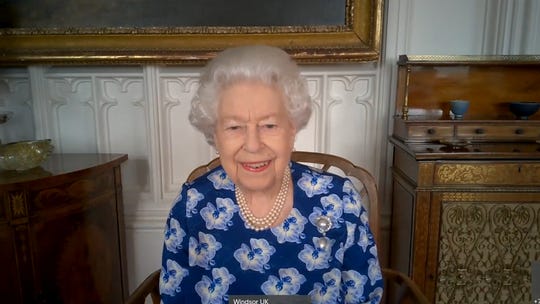 The accompanying note from the queen said: “As we look forward to a brighter future together, today we pause to reflect on the grief and loss that continues to be felt by so many people and families, and pay tribute to the immeasurable service of those who have supported us all over the last year.”

The bouquet is now on display in the hospital’s atrium, according to the royal family’s Twitter account.

The Duke of Edinburgh, as the prince is known, recently returned to Windsor Castle after a month in two London hospitals, including the private Edward VII’s Hospital often favored by royals.

“A @MarieCurieUK nurse observes a minute’s silence @BartsHospital in London earlier today to remember all those who have died and lost loved ones in the past year. The silence was held across the UK as part of today’s national #DayofReflection,” read the royal family’s tweet.

🌼A @MarieCurieUK nurse observes a minute’s silence @BartsHospital in London earlier today to remember all those who have died and lost loved ones in the past year. The silence was held across the UK as part of today’s national #DayofReflection. pic.twitter.com/xujLkhCnNI

Philip, who has been retired from public life and little seen since 2017, was hospitalized for an infection on Feb. 16 at the private King Edward VII’s Hospital often favored by royals.

During the month he was under care he was briefly transferred to St. Bart’s, as it is known, for successful treatment of a pre-existing heart ailment.

The duke, who turns 100 in June, left the hospital and returned to the castle on March 16.

The National Day of Reflection was organized by Marie Curie, the United Kingdom’s leading end-of-life charity, to “reflect on our collective loss, support those who’ve been bereaved, and hope for a brighter future,” according to its website, which features a message from royal patron, Prince Charles the Prince of Wales.

“On behalf of Marie Curie, I would like to thank Her Majesty The Queen for her thoughtful words and kind gesture of support for the National Day of Reflection,” said Marie Curie nurse Clare Horgan in accepting the gift.

“I’ve been supporting dying people and their families in the community since the start of the pandemic and know how important today will be for those who are going through bereavement,” Horgan said. “We hope that today will provide everyone with the time and space to reflect on the last year and to show their support to someone who is grieving at this difficult time.”

As part of the day, people were asked to reach out to someone who is grieving by sending flowers or a card or having a chat.

People were asked to pause to reflect for a minute at noon, create a colorful poster for their window or shine a light at 8 p.m., to show support for the aims of the commemoration.