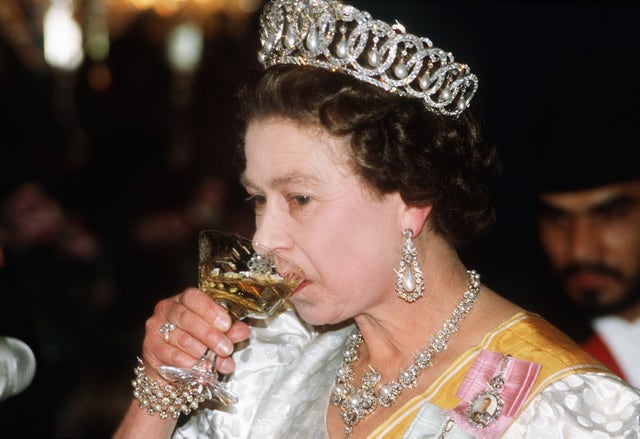 Queen Elizabeth will be toasting to a new endeavor this summer—a line of beer and gin. The British monarch is now selling a variety of alcoholic beverages on both the Royal Collection shop site and in the Sandringham Palace gift shop.

Beer is the palace’s newest venture, just confirmed this week. Buckingham Palace recently told People that Queen Elizabeth approved the sale of a range of beer. The beverage is brewed from plants grown on the monarch’s Sandringham estate in Norfolk, including the farmland’s Laureate Spring barley. Sandringham’s Twitter account then announced the launch, sharing the beer as Father’s Day present.

“We’re thinking ahead to Fathers Day and what better way to celebrate than with one of our new Sandringham Beers,” the caption read. “Sandringham Estate has developed an IPA and a Bitter from organic Laurette Barley grown on the wider Estate and is available to buy now from the Sandringham Shop.”

We’re thinking ahead to Fathers Day and what better way to celebrate than with one of our new Sandringham Beers.

Sandringham Estate has developed an IPA and a Bitter from organic Laurette Barley grown on the wider Estate and is available to buy now from the Sandringham Shop. pic.twitter.com/QHn2q3R3n4

The beers are offered in two varieties: a cold-filtered, English ‘bitter’ beer and Golden IPA, described by the Sandringham gift shop as “uniquely natural.” The beverages are produced by Barsham Brewery, also in Norfolk, and are being sold at $5.50 a bottle.

The Queen also recently added yet another product to her expanding repertoire of alcoholic beverages. The Royal Collection Trust, a department of the Royal Household, launched a sloe gin, a British red liquor made from gin and sloes (a red fruit, related to plums). In the new drink, hand-picked whole sloe berries are steeped in Buckingham Palace Gin, giving the sloe gin a “unique and intense fruit flavor,” according to the Royal Collection Trust.

The gin is available to buy online and from our shops. https://t.co/wh0hEbjjER pic.twitter.com/orwddmSwqQ

Buckingham Palace began producing and selling its own gin in 2020. The drink is infused with botanicals from the Palace garden, including lemon verbena, hawthorn berries, bay leaves, and mulberry leaves. The new gin adds sloe berries to the mix and is now available at the Royal Collection Shop.

The Trust recommends enjoying the sloe gin in a Sloe Royale. Their statement described, “Pour a 25ml measure of Buckingham Palace Sloe Gin into a fluted glass, top up with champagne or sparkling wine and garnish with fresh berries or orange peel.”