Prince Harry: Expert says she ‘feels sorry for the Queen’

During his opening monologue, the 37-year-old gave a nod to the pandemic, Donald Trump as well as the Royal Family.

The Grammys – delayed from January due to the Coronavirus – saw him state music “saved our souls over this unprecedented year”.

Speaking from a tent in downtown LA, Trevor quipped the ceremony would be the “biggest outdoor event this year besides the storming of the Capitol”.

He pointed to the masked nominees, seated and socially distanced and said there is “more tension in that tent than at a family reunion at Buckingham Palace”. 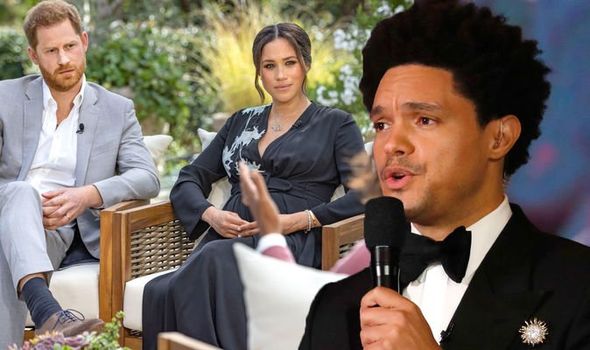 It came exactly a week after the Duke and Duchess of Sussex’s bombshell interview with Oprah Winfrey aired in the US.

Trevor continued: “Tonight we’re hoping that this is all about what 2021 can be, full of joy, new beginnings and coming together.

“Never forgetting what happened in 2020 but full of hope for what is to come.”

Viewers took to Twitter to comment on his statement, with one user posting: “Even the Americans are making jokes about the royal family now #Grammys.”

“[email protected] kicks off the #Grammys assuring that COVID-19 protocols are being follows and throwing in plenty of royal family jokes,” a third tweeted.

Brit Harry Styles then kicked off the show with a rendition of Watermelon Sugar, which scored a nomination for best pop solo performance.

The former One Direction star, 27, known for his androgynous fashion sense, performed wearing an open leather jacket and trouser combination with a green scarf.

Trevor joked that “the UK is diverse” after noting that Harry is from the same country as Prime Minister Boris Johnson.

Billie Eilish was next up singing her single Everything I Wanted, performing on top of a car which appeared to be submerged in the studio floor.

The 63rd running of the so-called biggest night in music had been rocked by an announcement from Canadian superstar The Weeknd that he was boycotting future Grammys.

He was snubbed this year, despite enjoying a hugely successful 12 months with his album After Hours. The Weeknd blamed his boycott on the “secret committees” that vote for the Grammys.

Before the main televised event, awards were handed out during the virtual Premiere Ceremony, with Beyonce and daughter Blue Ivy among the winners.

The nine-year-old is the second youngest winner in Grammy history after Brown Skin Girl, her mother’s song which she featured on, won best music video.

Meanwhile, the pop titan won four gongs from her nine nominations to make it 28 over her career, surpassing the 27 of bluegrass-country singer Alison Krauss.