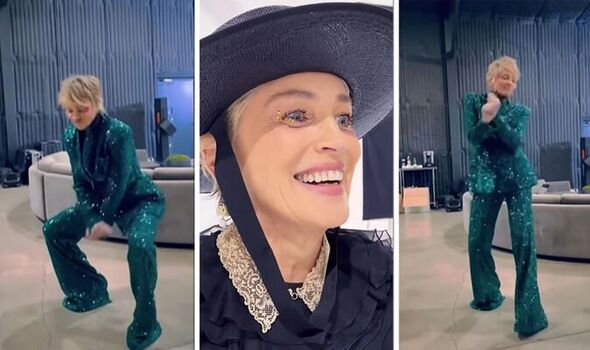 In a series of Instagram posts and stories, Sharon Stone treated her fans to a behind-the-scenes look at her latest photoshoot.

In a series of Instagram posts and stories, Sharon Stone treated her fans to a behind-the-scenes look at her latest photoshoot.

The 64-year-old appeared in a number of different looks through Thursday evening.

Most notably she went braless in a glittering turquoise suit, dancing her way across the studio.

Sharon proved she hadn’t lost her sex symbol swagger, which she proudly earned in the nineties as the star of Basic Instinct.

The photoshoot was for the Spanish version of Harper’s Bazaar.

Earlier this week the actress had fans gushing over her godson as she claimed she was teaching him to stand up.

Fans flooded her comments praising both her style and her impressive dance moves.

She paired the iconic suit with bright pink makeup

The actress wore bright pink, green and yellow eyeshadow along with delicate silver earrings and her iconic pixie cut hair.

The actress sported multiple looks on the photo shoot

She also appeared in a delicately layered black dress with a gold collar.

Sharon’s makeup stunned fans just as much as her outfits

She paired her black hat and dress with golden jewels around her eyes.

Sharon captioned the post: “Fun behind the scenes at the Harper’s Bazaar shoot.”

The actress strutted across the studio to Hypnotize by The Notorious B.I.G.

The star had fans gushing over her godson earlier this week

She shared the precious moment saying: “Teaching my godson to stand up by himself today.”