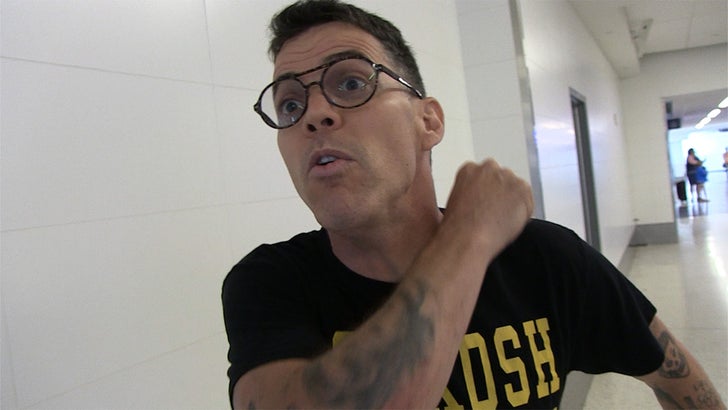 Forget Tom Cruise … Steve-O says HE should be the one to fight Justin Bieber — telling TMZ Sports that Justin is “picking a fight with the wrong guy!”

We broke the story … Dana White is hoping to put together a UFC match between the Biebs and Cruise after Justin called out the actor on Twitter.

But, Steve-O says he’s personally offended that he wasn’t the guy in the initial challenge … telling us out at LAX, “I’m sick of being overlooked for my potential as a cage fighter!”

Steve-O says he was so upset about the Bieber snub … he actually flew to Las Vegas to have a personal convo with Dana White himself about it all!!

“I had a little chat with Dana White,” Steve-O says … “And he agreed that if Tom Cruise doesn’t step up, and someone needs to fill the cage with Justin Bieber, then I’m the guy.”

Steve-O then issued a call-out of his own to Bieber … telling the Biebs, “I think you’ve been picking a fight with the wrong guy. Tom Cruise might be 56, but, hey, I’m 45!”

As for who would win in the Octagon … all Steve-O would tell us is that Justin has NO chance of ending the fight early — saying, “I can take a serious beating.”