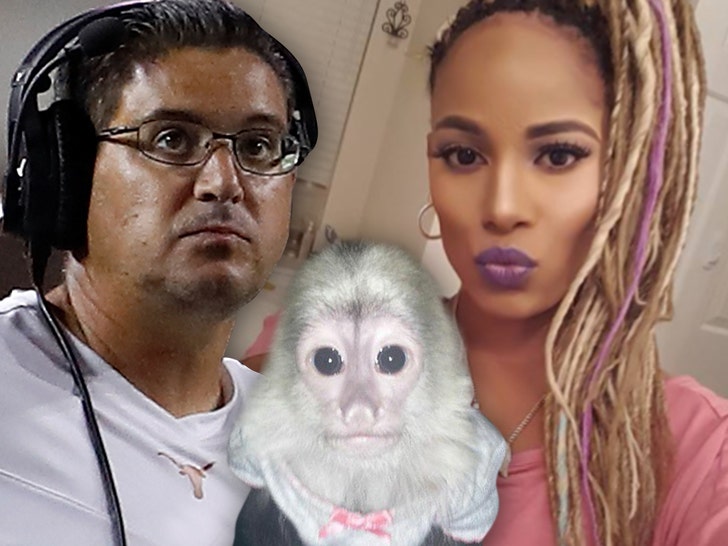 As if Texas’ football season couldn’t get any worse — a monkey belonging to Longhorns special teams coach Jeff Banks‘ GF is being accused of attacking a young trick or treater on Halloween … but the woman says it’s all the kid’s fault.

A report late Monday night claimed the white-faced capuchin “seriously hurt” a boy during Halloween festivities … with the monkey’s jaws having to be “pried” open to free the child.

Banks’ GF, Danielle Thomas — AKA “Pole Assassin,” a professional pole dancer once featured on “Jerry Springer” — admitted something happened, but quickly defended her monkey … claiming she was hosting a haunted event at her place, and the kid went where he wasn’t supposed to.

“I had a haunted house on one side gated off/ he had no permission to go pass the gate i had no idea he went in my back yard,” Thomas posted on Twitter before scrapping her account.

Thomas also claims she had no idea her monkey bit anyone until a local doctor told her about a “small bite.”

Thomas says the kids were told to turn around when they came to a set of balloons … and an “11/12” year old should be old enough to follow the rules and not venture off in someone’s yard without permission. She even posted a video detailing the kid’s assumed walk to the monkey cage … with a sign that reads “Do Not Enter, emotional support animal, no touching.”

“How could she viciously bite someone if they don’t stick their hand in there where they don’t belong?” Thomas said in the video.

We’ve reached out to law enforcement … so far, no word back.