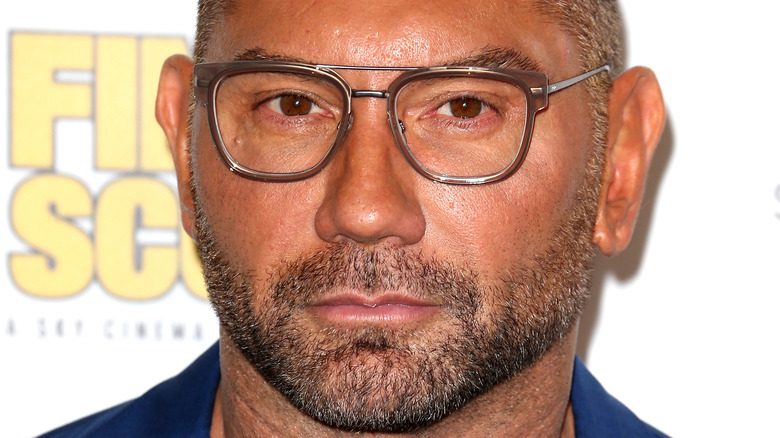 You may know Dave Bautista best for his role as Drax in the Guardians of the Galaxy film series, or perhaps you’ve seen him in “Escape Plan 2,” “My Spy,” “Stuber,” or one of his numerous other movie appearances. Before the big man turned to acting, however, he made good use of his impressive stature (he’s 6-foot-6 and weights in at 290 pounds, according to WWE) in the squared circle.

Bautista, by all accounts, didn’t have an easy go of it in his early years, growing up on the mean streets of … somewhere in the Washington metropolitan area. (While WWE claims his birthplace as the nation’s capitol, Sportskeeda says he was actually born in the ‘burbs and Arlington Magazine claims him as a hometown hero.) Geographical imprecision notwithstanding, the young Bautista had a rough upbringing, finding himself in violent scenarios from time to time, according to the Tampa Bay Times. He soon put his criminal ways behind him, however, and turned towards other pursuits better suited to someone of his size including being a club bouncer and a bodybuilder. Eventually he hit upon an idea that would finally see him going places –- good ones, the kind without armed guards and barbed wire -– when he decided to train as a wrestler.

Dave Bautista was told he'd never make it in wrestling 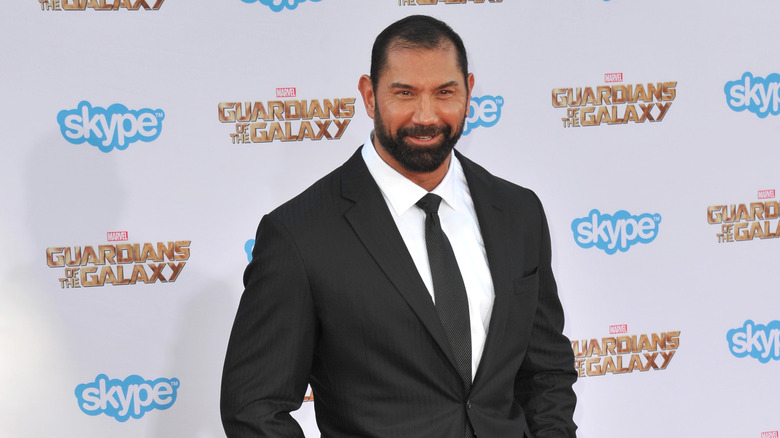 Dave Bautista’s first attempt to make it in the world of wrestling saw him trying out at WCE’s Power Plant training facility, but according to an interview he did on “Live With Kelly and Ryan,” things didn’t go too well for him there. As he admitted to the hosts, “They told me that I was horrible, to leave, never come back, and that I would never be a professional wrestler.” According to Pro Wrestling Fandom, the trainer making this bad call was former wrestler Sgt. Buddy Lee Parker. Rather than taking Sarge’s words to heart, Bautista said it just made him mad. “It made me want to pursue [wrestling],” he told Kelly Ripa and Ryan Seacrest, saying, “I just became obsessed with it.”

The big man’s next move was to hit up the World Wrestling Federation (WWE’s predecessor), and they sent Bautista to the Wild Samoan Training Center in Allentown, Pennsylvania (via WWE). There he learned from Afa Anoa’i, one half of WWE Hall of Fame duo The Wild Samoans.

Dave Bautista got his start on the independent circuit 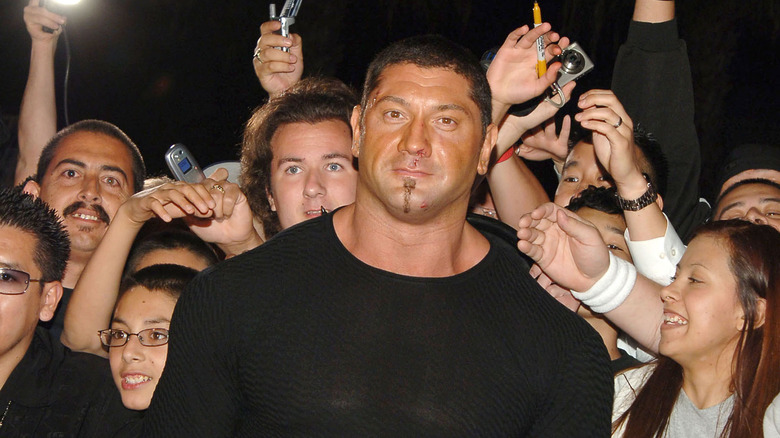 After learning the ropes (and the turnbuckles, aprons, and canvas) from Afa Anoa’i, Dave Bautista was ready to make his 1997 debut on the indie circuit with Ohio Valley Wrestling (via Pro Wrestling Fandom). OVW, which is actually based out of Louisville, Kentucky, rather than anywhere in Ohio, is one of the more prominent regionals, one that Sportskeeda says has sent more than a few future stars up to the WWE.

It was in OVW that Bautista got pegged as a villain for the first (but hardly the last) time. While he debuted under the name Leviathan, he would also wrestle in demonic drag complete with fangs under names such as “Demon of the Deep” and “Guardian of the Gates of Hell.” (Interesting how that latter moniker foreshadows a future movie role of his … mysterious are the ways of sports entertainment.) Bautista did fairly well for himself over the three years with this promo, even winning the OVW Heavyweight Championship a few months before receiving his call-up to the big leagues. 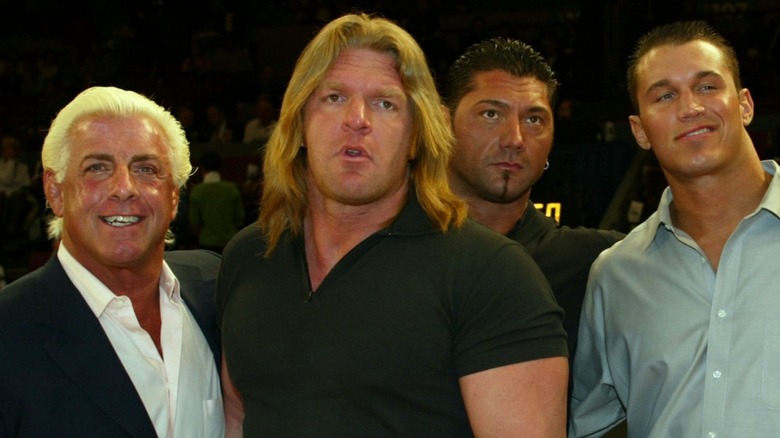 According to Pro Wrestling Fandom, Dave Bautista made his debut on the May 9, 2002, episode of “Smackdown” under the name of Deacon Batista, a bad-guy enforcer for Reverend D-Von. Together the two tag-teamed against Faarooq and Randy Orton and got the win, a situation that continued over the next few weeks as Orton unsuccessfully challenged the duo with a variety of partners. Batista and D-Von eventually split up, however, but early in 2003, Bautista got an even better gig. He joined forces with Triple H, Ric Flair, and Orton to form the stable of heels known as Evolution.

By year’s end, all members of Evolution would hold all of the men’s titles: Orton was the WWE Intercontinental Champion, Triple H the World Heavyweight Champion, and Flair and Bautista were the World Tag Team Champions. Over the course of 2004, though, things kind of went downhill a bit for the team, and Triple H, in particular, began to see Bautista as a threat to his own advancement within the WWE organization. The last straw may have come when he suggested Bautista not enter the 2005 Royal Rumble, advice Bautista ignored and went on to win the event. This won him the chance to take on the champion of his choosing at that year’s Wrestlemania, and he chose to take on Triple H, thus effectively breaking up the band. 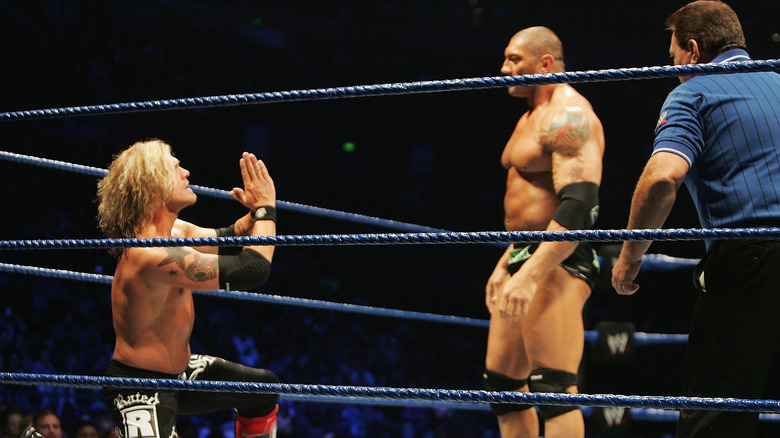 Dave Bautista’s 2005 defeat of Triple H was the first of his six World Heavyweight Championships, and WWE reports that the 282 days he held the title set a record for the longest single World Heavyweight Champion reign. Later in 2005, Bautista became the first-ever wrestler to defeat Triple H in a Hell in a Cell match, then teamed up with new partner Rey Mysterio to win the WWE Tag Team Championship once again.

Over the next few years, Bautista’s successes would continue to mount up, with him defeating such notable opponents as The Undertaker, John Cena, and rival-turned-ally-turned-rival once more Randy Orton. By 2010, however, Bautista had evidently grown unhappy with the direction WWE was heading, although he wasn’t too specific about exactly what it was he didn’t like. Nevertheless, as Pro Wrestling Fandom reports, Bautista announced that he would be leaving the company in May of that year shortly after losing his championship to Cena. Although he didn’t admit the real reason for that first retirement until nearly a decade later, it turns out that Bautista’s abrupt departure may have had less to do with what went on in the ring than the fact that he wanted to focus more on his acting career. 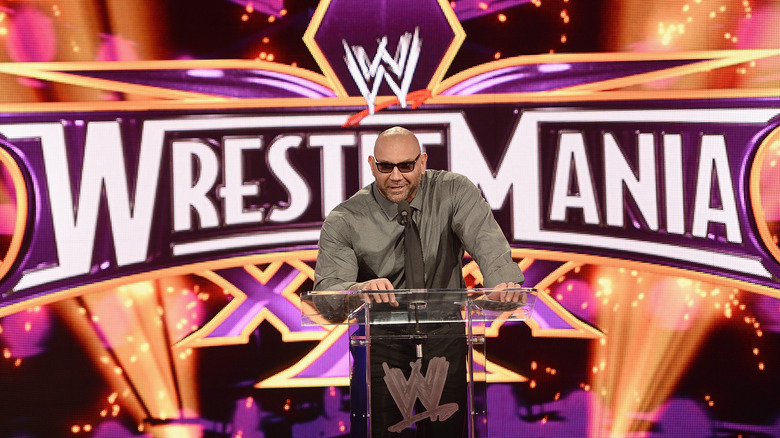 After a four-year hiatus, during which time movie roles were fairly thin on the ground and an attempt at an MMA career fizzled out, Dave Bautista returned to the WWE. He was back in a big way, too, as Pro Wrestling Fandom says he won the Royal Rumble in January of that year. Bautista even reunited with Evolution to take on the Shield, a dynamic trio made up of Roman Reigns, Seth Rollins, and Dean Ambrose.

By June, however, Bautista was once again out of WWE for a variety of reasons ranging from his commitment to promote “Guardians of the Galaxy” to his lack of fan support (via SportsKeeda). He did return once more in 2018, reuniting yet again with Evolution for the thousandth episode of “SmackDown.” His last match came in April of 2019 as he lost to Triple H in a no-holds-barred match at that year’s Wrestlemania. Still, if you missed seeing The Animal in action, never say never. Who knows, Bautista could wind up like his old Evolution stablemate Ric Flair, who’s still woooooo!-ing it up in the ring in his 70s.