“The View” will be getting a new co-host — but not anytime soon. As fans of the show may know, panelist Meghan McCain announced in July that she would be leaving “The View” after four years, per The Hollywood Reporter. McCain cited her desire to spend more time with her family and not have to commute from her home in Washington, D.C. to New York City, where the show films, as reasons for her departure, reported the Associated Press. Her last official day was August 6, and she said the episode felt like “a memorial,” via the AP. It’s currently unclear if McCain’s replacement will share her “conservative” political leanings, since no permanent new co-host has been announced yet.

The show’s executive producer, Brain Teta, said (via The Hollywood Reporter) that the show plans to take its time finding someone to fill McCain’s seat. In the meantime, when the show returns for its 25th season on September 7, there will be a rotating cast of high-profile names who will take their turn as a guest on the panel. The guest co-hosts will range from politicians, like former Utah congresswoman Mia Love, to businesswomen, like former Hewlett-Packard CEO Carly Fiorina. There will even be a few reality TV stars thrown into the mix! Fans of Bravo will be pleased to know two of the network’s stars are on the docket. But who are they? Keep scrolling to find out!

Eboni K. Williams and Cameran Eubanks will be guest co-hosts 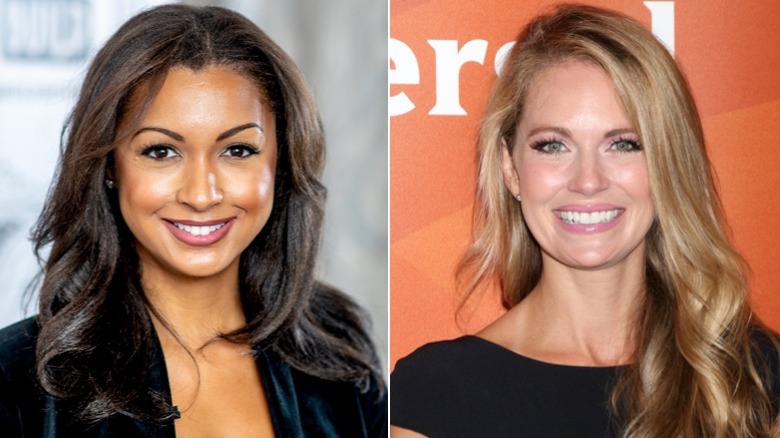 The list of guest co-hosts for “The View” is varied, as it includes two reality TV stars who couldn’t be more different, per The Hollywood Reporter. Although both Eboni K. Williams and Cameran Eubanks spent some time on the reality TV network, their résumés are nothing alike. Williams is a relative newcomer to Bravo, having been cast as the first Black housewife on “The Real Housewives of New York City” in 2020. A lawyer who specializes in “family law and civil litigation,” per People, Williams made a name for herself as a contributor on Fox News. Following the departure of Tinsley Mortimer and Dorinda Medley on “RHONY,” Williams joined the reality show cast, saying (via People) that she “can’t wait to share a slice of life in this city that hasn’t been seen before.” Seems she’s expanding that to a guest stint on “The View!”

Eubanks, on the other hand, has made a name for herself on reality TV, though she appears to have put that behind her. She got her start on “The Real World: San Diego,” according to People, and then was a main cast member on Bravo’s “Southern Charm” since 2014. She even did “the show’s voice-over narration.” However, in February, Eubanks announced that she would not be returning to “Southern Charm” and, in fact, wrote in her book, “One Day You’ll Thank Me,” that she was “pretty certain” she was done with reality TV. Maybe being a co-host on “The View” will be more to her liking?