Travis Barker seems to have GF’s Kourtney Kardashian’s handwriting inked on his body, with a new tattoo reading ‘You’re so cool.’

Travis Barker and girlfriend Kourtney Kardashian‘s shared love of the 1993 film True Romance seems to have resulted in new ink for the Blink 182 drummer. The 45-year-old debuted a new tattoo via his Instagram page on Mar. 24 that read ‘You’re so cool,” a prominent line from the romantic crime film and the name of the love theme by composer Hans Zimmer. In the black and white video of Travis inking himself (bold!!), the words appeared on his upper right thigh. Fans immediately looked at the tatt and thought that it was Kourtney’s handwriting that created it.

User @theessentialsofsands asked, ‘”Did Kourt write that on you!” while @christie_r pointed out “kourtneys handwriting?” Fan  @areinafierce commented, “Kourtney wrote that huh,” while @silkielifestyle_founder left a compliment to the Poosh founder, telling her “@kourtneykardash your penmanship is impeccable.” Kourtney, 41, just wrote Travis a note professing “I love you,” which he posted to his IG stories and the handwriting seems to match 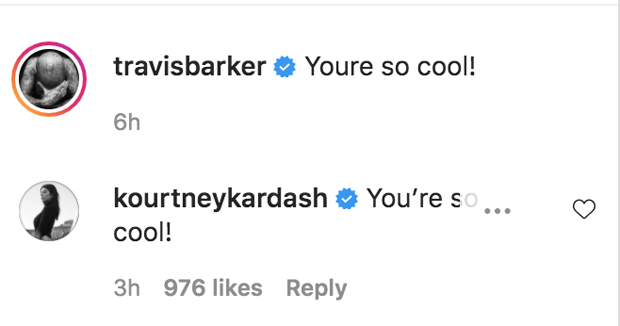 Travis wrote in the caption “You’re so cool” and Kourt responded in the comments by exchanging the line right back to him. It’s soooo Clarence and Alabama from True Romance. Before the pair officially came out as a couple, Kourtney and Travis made their love for the film — and the line — known. On Jan. 5, Kourtney posted three IG stills from a scene with Christian Slater and Patricia Arquette characters passionately kissing and left a red heart emoji as her caption. Travis then chimed in the comment section by writing “You’re so cool.” 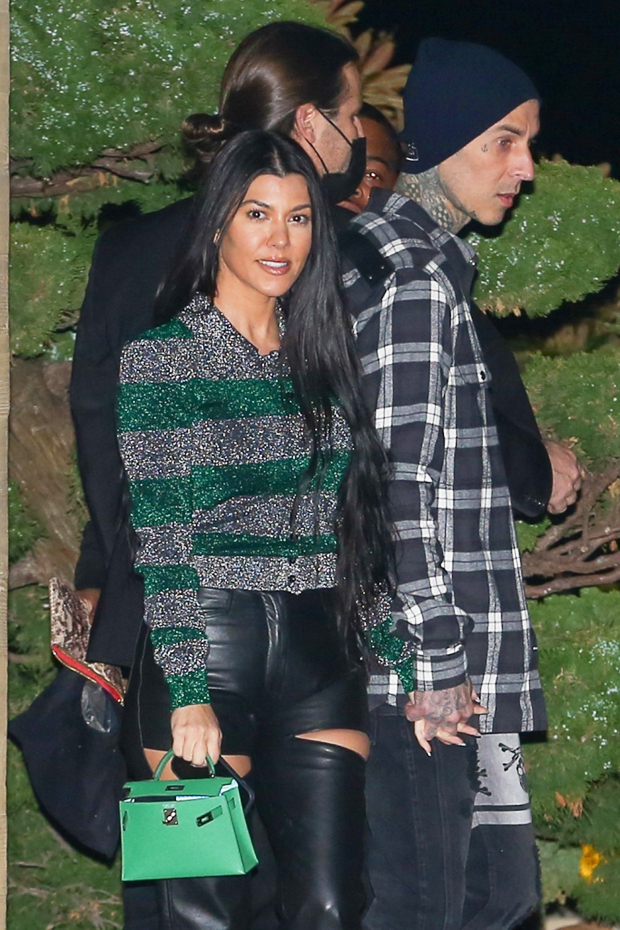 Fans are already totally on board with longtime pals Kourtey and Travis finding love as a couple. Under Kourtney’s “You’re so cool” comment, User @reba.babble wrote, “@kourtneykardash looks like true romance to me! fav movie + fav couple!” while @chelseabaker82 told the reality star “@kourtneykardash you and @travisbarker are the coolest couple ever.” Fan @lela31196 told Kourtney she and Travis are the “MOST INTERESTING COUPLE TO LOOK AT,” in a play on sister Kim Kardashian‘s infamous diss, while @gata.fina told the mom of three “@kourtneykardash OMG get married now” to Travis.

As we previously told you EXCLUSIVELY, Travis is already in love with Kourtney, even before she professed it in the Mar. 22 note. A source close to the couple told us, “It was very easy to fall in love with each other because they have had a foundation of friendship that has lasted a lifetime in Hollywood. Other circumstances didn’t allow them to become a couple till now, and now that they are, they don’t need a honeymoon phase, they just need each other.”