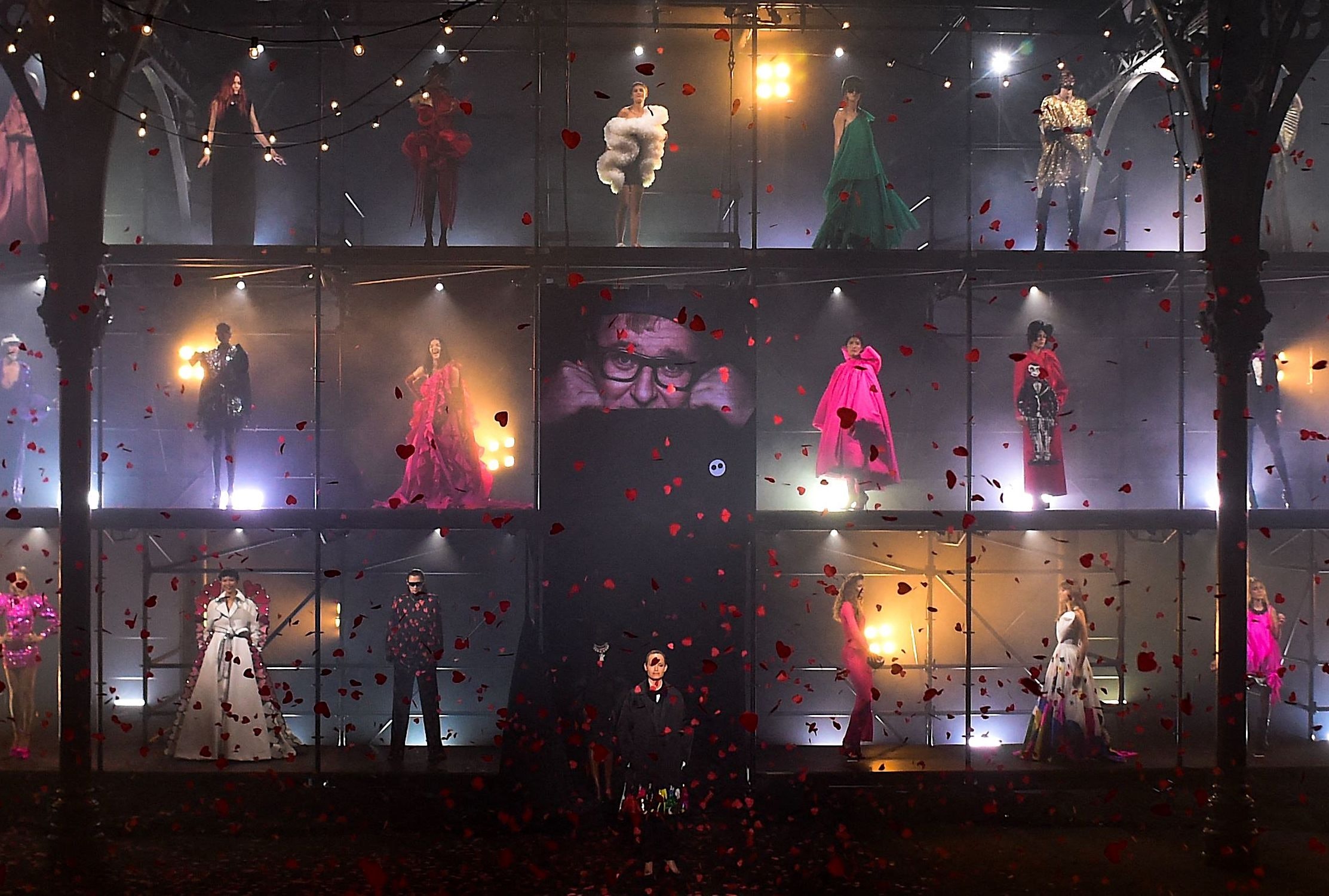 The grand finale of the spring 2022 season doubled as a reminder that the industry’s love for Alber Elbaz, who was just 59 when he died of Covid-19 in April, knows no bounds. On Tuesday, the final day of Paris Fashion Week, no less than 45 of the industry’s top houses and designers put rivalry aside and came together on the runway, paying tribute to their late peer by mounting a show fittingly titled “Love Brings Love.” Participants included Raf Simons, Jean Paul Gaultier, Rick Owens, Virgil Abloh, Christopher John Rogers, and that’s just to name a few. All the big maisons were there, thanks to Gucci’s Alessandro Michele, Fendi’s Kim Jones, Balmain’s Olivier Rousteing, Louis Vuitton’s Nicolas Ghesquière, Burberry’s Riccardo Tisci, and Dior’s Maria Grazia Chiuri. Many could also be spotted in the front row, alongside France’s First Lady Brigitte Macron and longtime admirer Demi Moore (who brought along her daughter, Scout Willis). In fact, the industry came out in such full force that by the time everyone was seated, the show was more than an hour late.

The first to appear on the catwalk was Adut Akech, who led the way in a black dress by Elbaz’s very own AZ Factory, which has continued to operate since the designer’s untimely death. From there came riff after riff on what Elbaz established as his hallmarks during his acclaimed tenure at Lanvin, where he was creative director from 2001 to 2015. As far as the live stream viewers were concerned, no one understood the assignment like Donatella Versace, who infused Elbaz’s sensibilities with her own by presenting a hot pink mini dress with statement shoulders. Meanwhile, Dries Van Noten printed one of Elbaz’s self-portraits onto a bright red coat, and Viktor & Rolf resurrected a 2020 couture design heavy on the heart motifs.

Others paid homage to Elbaz’s personal style: Saint Laurent’s Anthony Vaccarello outfitted Anja Rubik in Elbaz’s unofficial uniform of a black suit, white button, and fuchsia-colored bowtie. Comme des Garçons’s Rei Kawakubo also gave the bowtie a shoutout, in the form of a hair bow atop the heads of many a printed Minnie Mouse. No one bore more resemblance to Elbaz than the supermodel Amber Valletta, who even took on the late designer’s body language to close out the evening’s guest designer portion. Wearing a baggy black coat embroidered with sequined motifs of Elbaz’s past designs, she smiled, bowed, and made way for the final procession.

This may have been the cream of the crop of designers, but none of them could best Elbaz’s very own team. The string of AZ Factory looks that followed proved that as long as they’re around, Elbaz’s designs will live on. The same goes for his championing of positivity within the industry. They concluded the tribute in a very Elbaz-like fashion by turning it into a celebration. Hot pink confetti dropped from the ceiling as “Love Train” blared through the speakers and models broke into dance. Skip ahead to the 49-minute mark to see for yourself, below.