It was 4 p.m. last Friday and a 30-something New Yorker who’d just flown into the East Hampton airport was seated on a bench outside the terminal, typing into his laptop, a pair of orange Hermes bags to his side.

Nearby was a guy in his 50s, wearing a black T-shirt, board shorts and a Patek Philippe sports watch.

Helicopters descended one after another, depositing visitors and well-off Manhattanites who had turned this summer playground into their full-time home last year. Many arrived via Blade, an Uber for the skies that usually costs around $795 a seat. Goyard totes were in abundance, as were nannies and goldendoodles, the current must-have dog breed among the Hamptons social set. (Their fare on Blade is $95.)

Some were picked up by suited drivers in Suburban SUVs. Others had spouses waiting for them in Jeep Rubicons. Virtually no one wore a mask, save for the Blade attendant on the tarmac offering Panna water and Perrier. (Indeed, when one spots a person wearing a mask outdoors, chances are high that the person is attending to the rich.)

After a year-plus serving as quarantine refuge for those who could afford it, the Hamptons’s seasonal surge is back.

In the first quarter of 2021, home sales there were up 48 percent compared to 2020, according to a report by the appraisal company Miller Samuel for Douglas Elliman Real Estate. Store owners in East Hampton happily tell you about the record sales they did this winter, when Park Avenue residents decamped for Further Lane. (They’re less inclined to talk about whether they received bailouts through the Paycheck Protection Program.)

No longer sounding alarms about ventilators at the Southampton hospital, local activists have turned their civic attention to a parking app that was recently introduced in East Hampton. Designed to reduce congestion and raise funds for the town, the app is opposed by residents who fear that their data will be collected and their privacy invaded. (ParkMobile, the company responsible for the app, did have a security breach in March.)

Of course, when other towns and cities, including New York, are dealing with huge declines in tax revenue, the hullabaloo over a parking app can feel trivial, a first-world problem of the highest order.

“This is a reactionary community filled with people who drive in the same entitled way they feel about themselves,” said Steven Gaines, the author of “Philistines at the Hedgerow: Passion and Property in the Hamptons.” “They bring their aggression from the city out here and whine and complain when they don’t get what they want.” 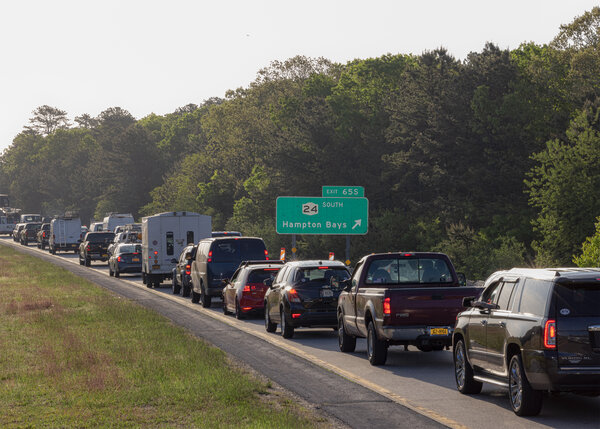 Warhols and Rolexes for Sale

On Saturday morning at the Golden Pear in East Hampton, diners were choosing among a $15 breakfast burrito, $16 avocado toast and $18 oatmeal.

Denise Asnes, who lives in Philadelphia during the winter, and has a house in Springs, N.Y., opted for the burrito. “Now that people are vaccinated, it feels great to be able to go into East Hampton and smile at people without wearing a mask,” she said. “After a year at home, I couldn’t wait.”

The commercial strip in East Hampton was buzzing with the sound of credit card swipes and the quieter bloop of ApplePay purchases. Unlike in SoHo or on Madison Avenue, where many stores have struggled to stay open, the upscale boutiques and gourmet purveyors seemed to be thriving.

Shoppers at the clothing store Tenet tried on $225 Rag and Bone shorts and $140 linen tees from Officine Générale.

“The summer before Covid, people were coming in, but they weren’t really spending, ” said Martyna Sokol, 33, a schoolteacher tending to customers on behalf of her boyfriend Jesse Warren, who, in addition to being the mayor of Southampton, is the owner of the shop. “Now, it’s like all year, people were out. People are buying.”

Others visited the Sotheby’s art gallery on Newtown Lane and Pace Gallery on the aptly named Park Place, where a David Hockney show was taking place.

Both galleries opened as pop-up spaces last summer, when the super-wealthy decamped to their beachfront estates and wanted to dress up the blank walls. Business was good and they are now permanent.

At London Jewelers on Main Street, a saleswoman apologized for the Rolexes that had left the store on other people’s wrists. “I know,” she said. “I’ve got nothing.”

Shortly before 2 a.m., the skies were still clear, the weather warm without being humid. Young men in polo shirts swarmed the deck, fist bumping to “I Rock I Sweat I Dance,” a Euro-house track that consists mostly of the title being said over and over again for three-and-a-half minutes. Smoke billowed from a firepit.

Weekenders seeking a good time are back in full force as well.

On Main Street earlier that evening, Krishna Shah, 26, who lives in Manhattan, was waiting for an Uber to take her and a group of friends back to their rental house on Water Hill Road. “I don’t know which part of East Hampton that is,” Ms. Shah sad. “It’s an Airbnb. We were drunk when we booked it.”

“Yeah,” said her friend Paul Orshansky, also 26. “We basically thought, ‘Let’s go before it gets insane.’”

Things were picking up in Amagansett, too.

Outside of The Stephen Talkhouse, a bar that features blues musicians and lots of beer, a line of 20-somethings were waiting to be carded by Will Field, who was checking more than just their age. “I need to see Excelsior passes, proof of vaccination,” he said, referring to the digital New York vaccination card.

Mr. Field, 40, had a tough year. Unlike many shops and restaurants, the Talkhouse remained closed for nearly a year, and reopened just weeks ago.

Although Mr. Field received unemployment benefits from the government, it wasn’t enough to make up for the money he ordinarily makes working for the bar. “I was hanging by a thread,” he said. “I had to borrow money from my dad.”

So he’s glad to be back, even if the room inside only had around 50 people, making it about half full.

A young man in a T-shirt and board shorts approached. Apparently, he was a regular. Mr. Field asked for his card. “Well, I don’t have it right now,” he said, before going back to his car and driving off.

“We want to stay open,” Mr. Field said with a shrug. “We have to do this safely.”

Before the Hamptons became synonymous with Wall Street, it was known as a place for the artistic and literary.

Andy Warhol lived in Montauk. Jackson Pollock died in the Springs of East Hampton after crashing his car during a bender.

Today, a hint of bohemia remains in Sag Harbor, where the local fixtures include the musician Jimmy Buffett, the writer Jon Robin Baitz and the artists Eric Fischl and April Gornik.

Ms. Gornik, 68, and Mr. Fischl, 73, who are married, got their first place in Sag Harbor in 1985, around the time he had a retrospective at the Whitney Museum. In 2004, he and Ms. Gornik left the city for good and became the unofficial fairy godparents of the Hamptons art scene.

They recently completed two major projects. She oversaw the renovation of the Sag Harbor Cinema, which is popular with the Criterion Collection crowd and now operates as a nonprofit. And together, they transformed an old Methodist Church into a cultural center and art showplace.

On Saturday afternoon, the church had its ribbon cutting. About 50 people attended including Nicole Seligman, the former president of the Sony Corporation; Joel Klein, the chief policy and strategy officer at Oscar, the insurance provider; and Claude Lawrence and and Leslee Stradford, who are artists in residence there.

Although Mr. Fischl pumped millions of dollars into the project, oversaw the design and painted the portraits of Sag Harbor’s historic figures that adorn the windows, he stepped out of the frame and let his wife do the talking.

“He’s decided not to speak today, so darling, thank you,” said Ms. Gornik, who teared up as she spoke of all the love that went into getting the building completed.

Inside, the space looked like an old whaling town’s church by way of Axel Vervoordt. Beams were exposed. Two works of art were on display: one was a canvas from Kerry James Marshall; another was a photograph from Awol Erizku.

A clear glass elevator connected the library above the gallery, to the artists’ studio below. “This was our most expensive detail,” Ms. Gornik said. “Eric wanted a really cool, clear elevator, we spent a fortune on it, and it’s the slowest elevator in the world.”

Ms. Gornik wants Sag Harbor to be a place with real diversity, with more affordable housing and opportunities for artists of color. She was pleased to see residents rally around local businesses last winter.

But in Manhattan, commercial vacancies enabled new restaurants and galleries — ones run by young people who do not yet represent blue chip artists — to open at reduced rates. That hasn’t happened out here to the same degree, she said.

The reason is simple. “Real estate just kept booming up.”