A WOMAN was shocked after accidentally receiving a hurtful message from her prospective employer, in which he described her as “not that cute.”

A now-viral video detailing the job application, posted Thursday on TikTok, has amassed more than 1.3 million views on the streaming platform as of Friday morning. 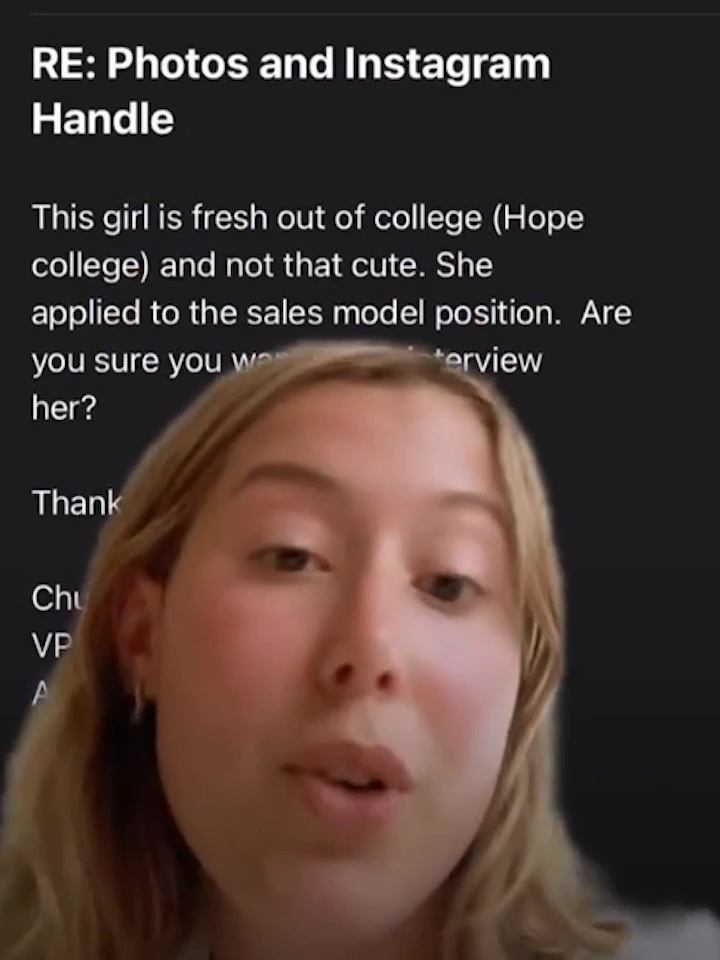 “Feeling amazing,” wrote a dejected Gracie Lorincz in the caption to her clip.

The fiasco occurred while the 21-year-old uni grad was applying for a position as a “brand representative” for the Michigan-based Ava Lane Boutique, which purports to inspire “beauty through confidence,” per the clip.

They betrayed their motto after Chuck DeGrendel, VP of operations, accidentally sent the prospective employee a dismissive email, which was intended for his wife and the store’s owner Laura Langen DeGrendel, Click On Detroit reported.

“This girl is fresh out of college (Hope College) and not that cute,” wrote DeGrendel, according to the local outlet. “She applied to the sales model position. Are you sure you want me to interview her?” 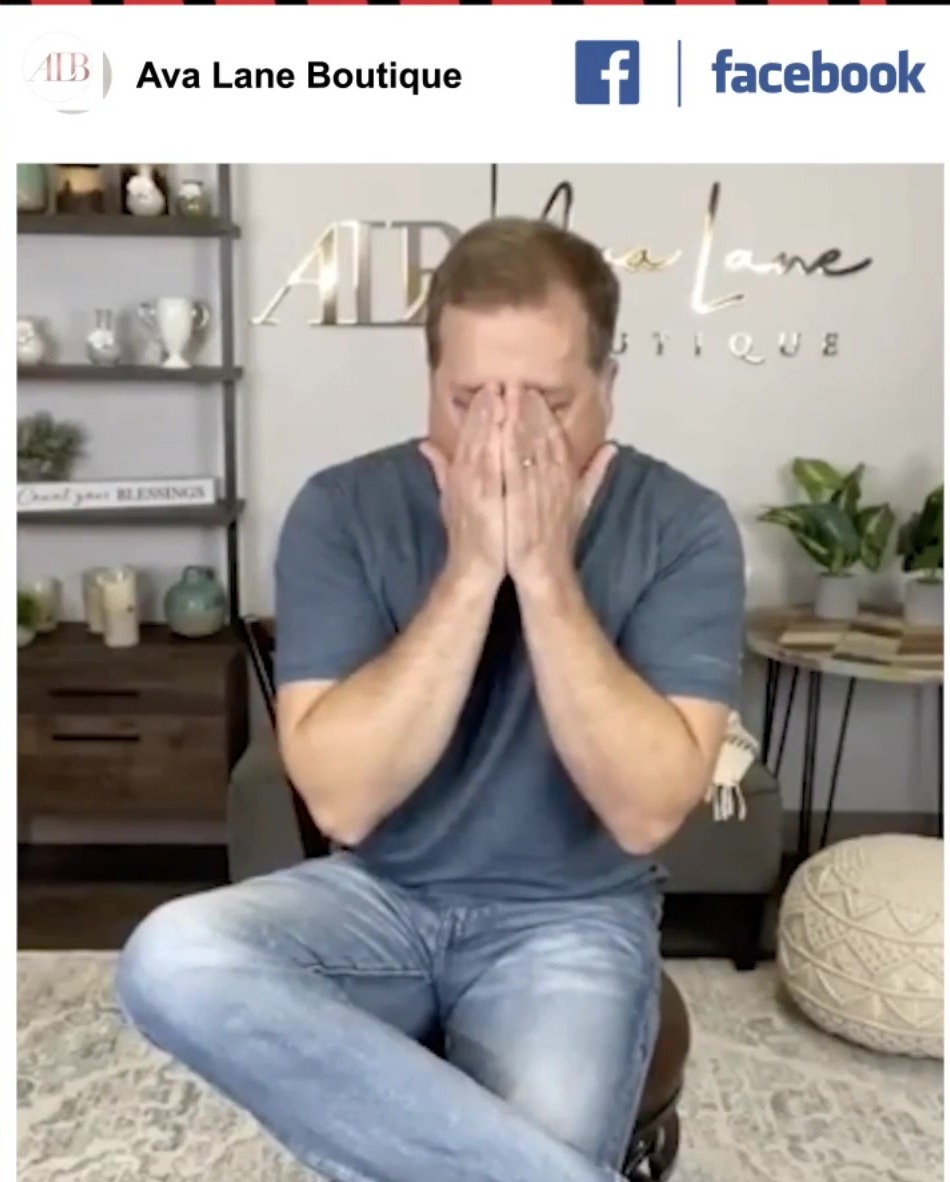 The boutique boss’ shallow remarks didn’t sit that well with her mum, Heather, who told Fox News that the incident “was embarrassing” and “made her feel terrible.”

The angry parent added: “She is a sweet kid, she is not an attention hog. She is not a social media personality, and didn’t anticipate what this turned into.”

“Clothing is ‘not that cute,’ ” said one of her defenders on the site. “Not to mention the app also crashes a lot. I could not find any selection worth purchasing.” 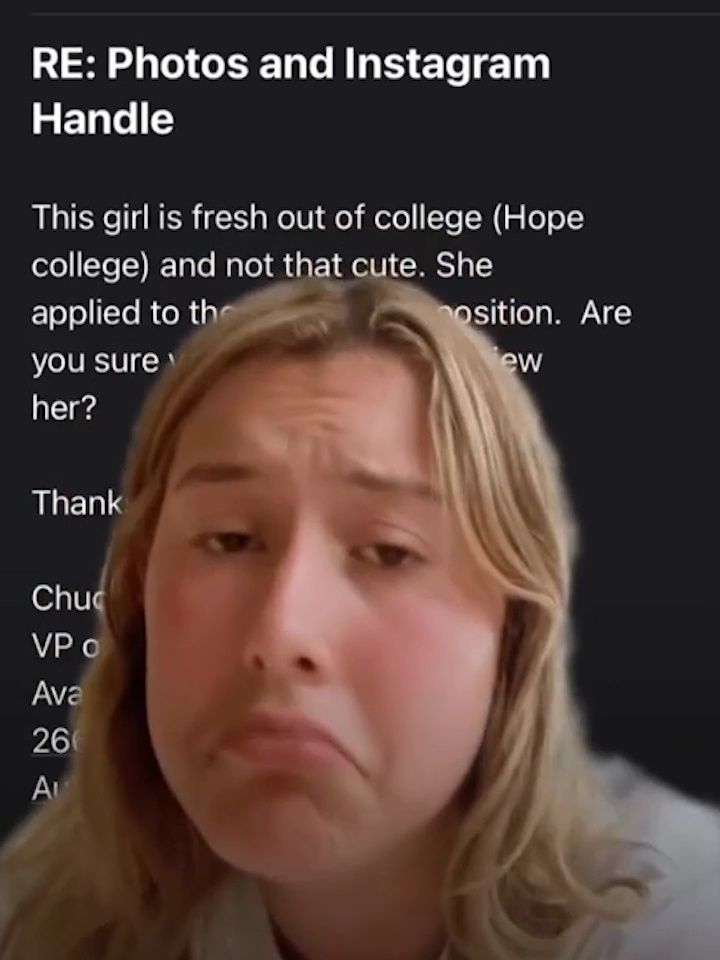 Another wrote that people “should never support a company that refuses to interview someone because in their words ‘they’re not that cute.’ ” Ava Lane’s owners claimed that people had shared their phone numbers and address, and even threatened their lives over the comments, Click On Detroit reported.

In response to the backlash, husband-and-wife owners Chuck and Laura DeGrendel have since uploaded a Facebook Live video, in which they tearfully apologised for the “inappropriate” correspondence.

“I sent a reply back to Laura that said that she was a recent college grad, and I didn’t feel that she was that cute, so I wasn’t sure if we wanted to proceed with an interview,” explained he said.

“I don’t know why I said that, but I did, and I’m very, very sorry for saying that because it was very unprofessional and really not in line with our core values here, or my core values in general.”

His wife, who came on screen later, added, between sobs: “He made a mistake, and he owns it.”

This was first published in New York Post and has been republished with permission.

In more news this husband discovered that his wife was cheating during the birth of 'his' son.

And this mum says her daughter was called a "spoiled brat" after she spent £200 on her Christmas presents.

Plus this mum has revealed how you can save thousands this Christmas without sacrificing a thing.