A DOTING daughter was determined to overhaul her mum's child-like dinosaur-themed bedroom with the help of her three younger sisters and some bargain buys.

Jay-leigh Gautier, 21, a criminology graduate from New Mills, was desperate to give her mum the stylish space she deserved, but only had one night and a budget of £200 to do it. 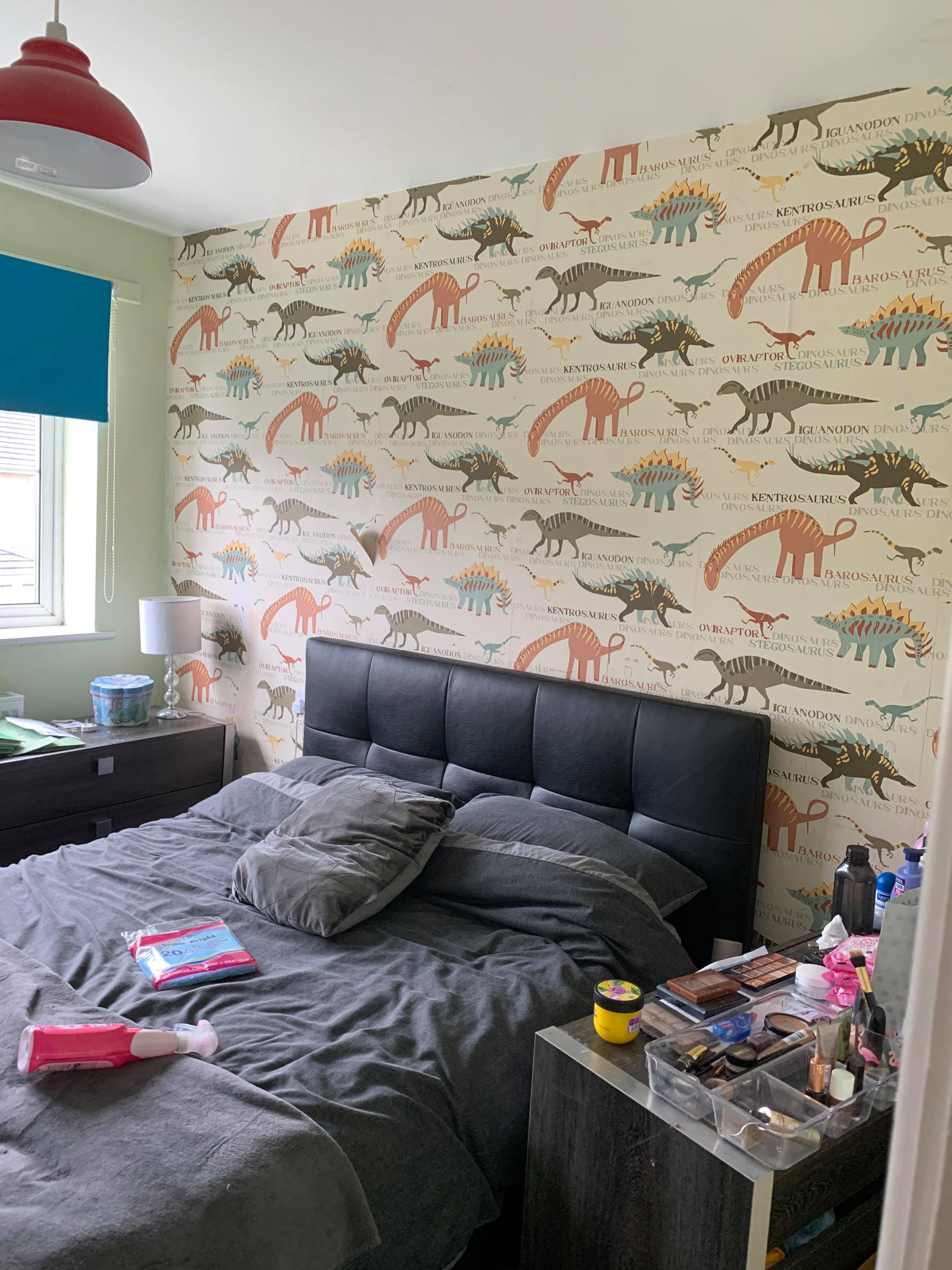 Jay-leigh took to B&M, Homesense and Primark to pick up some stylish budget buys and even painted the room a modern grey with help from her sisters.

The sisters even managed to create an on-trend gallery wall for just £30, which they hung above their mum's bed.

Jay-leigh told money-saving community LatestDeals.co.uk: “My sisters and I came up with the idea for my mum, as she works so hard in her job for her kids.

“She’s a regional manager with six kids and never really has time for herself to unwind. 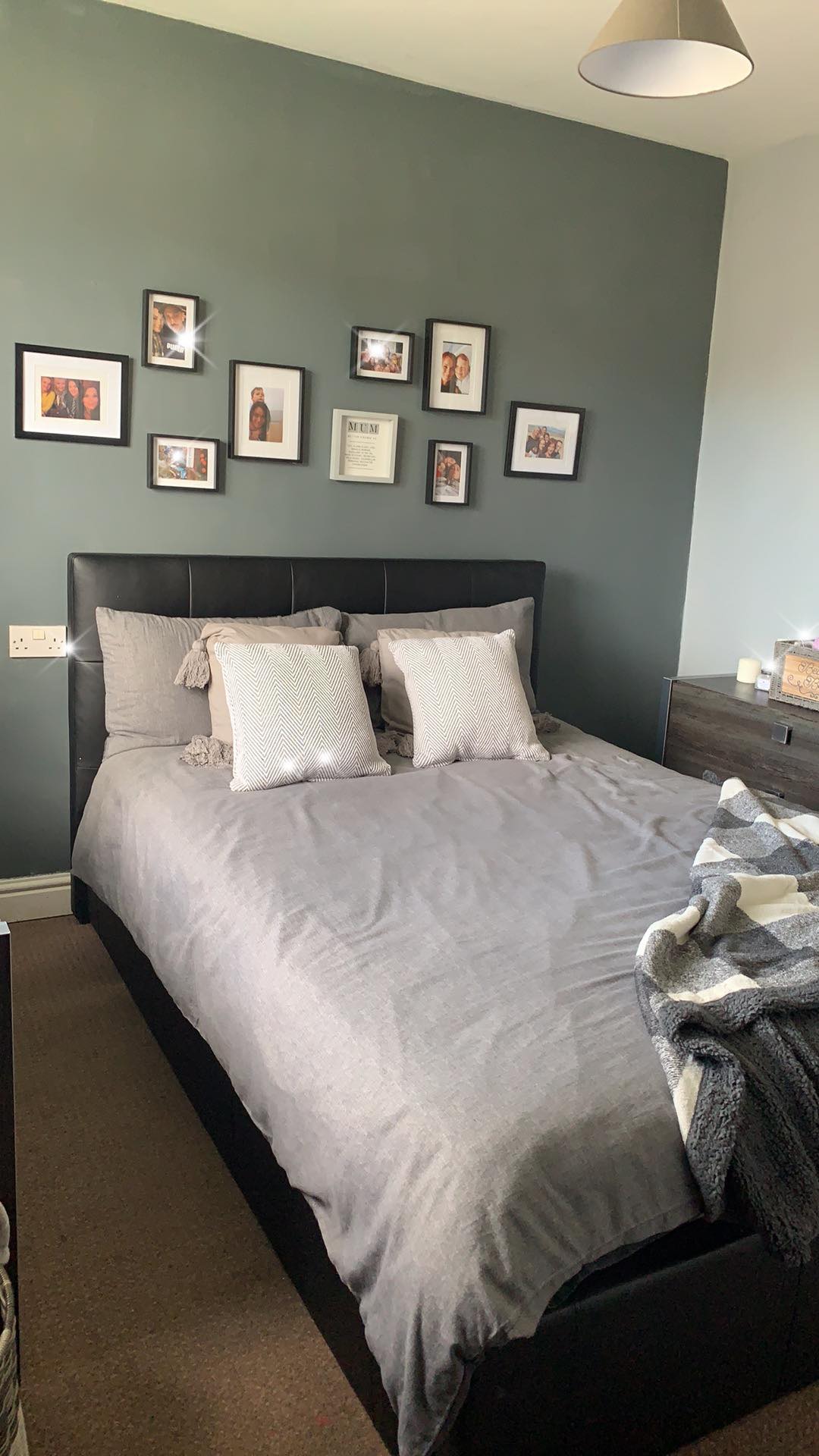 “She had recently swapped bedrooms with my brothers, and their bedroom had been decorated so it was all sorted.

"But she was then sleeping with her new furniture in the old decorated boys' room which looked awful."

The 21-year-old said that her mum knew it needed decorating but whenever she got time off work she just wanted to relax so it didn’t get done – so they chose to surprise her for her birthday instead.

She continued: “We arranged to get her out of the house for the night and we had all our aunties and nan in on the plan and they helped distract her. 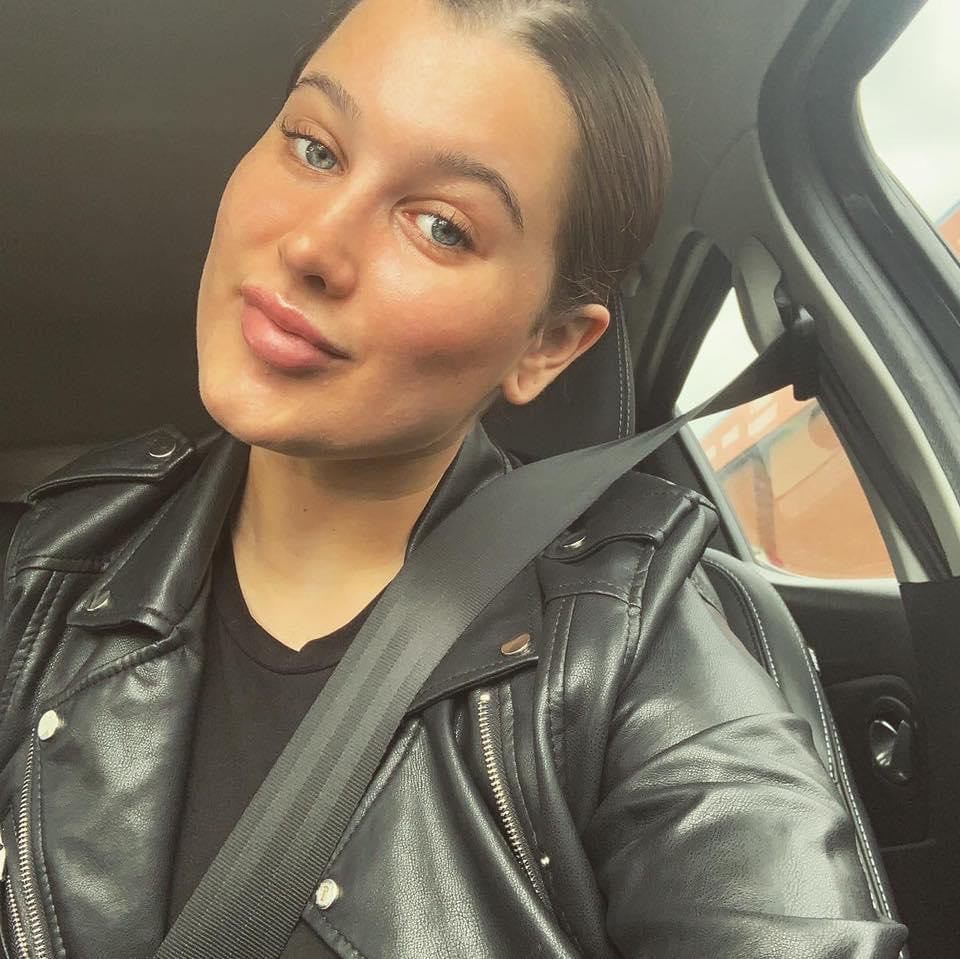 “My mum went to stay at my nan's house for the night and didn’t suspect a thing. Me and my three younger sisters started as soon as she left at around 3pm and we finished it at 8am so it took us a whole night!

“Beforehand, we got paint by ordering online. We ordered it a few weeks in advance as when we ordered it took a while to come due to lockdown.

“We spent around £70 on paint for the whole room and we didn’t even use it all. We used Johnstone’s Steel Smoke and we got two tubs for £22 pounds and then a large tub of Moonlit Sky, also by Johnstone's for £21.

“We also bought also a white gloss for the skirting boards and door. We already had leftover white paint for the ceiling so we didn’t spend any for that." 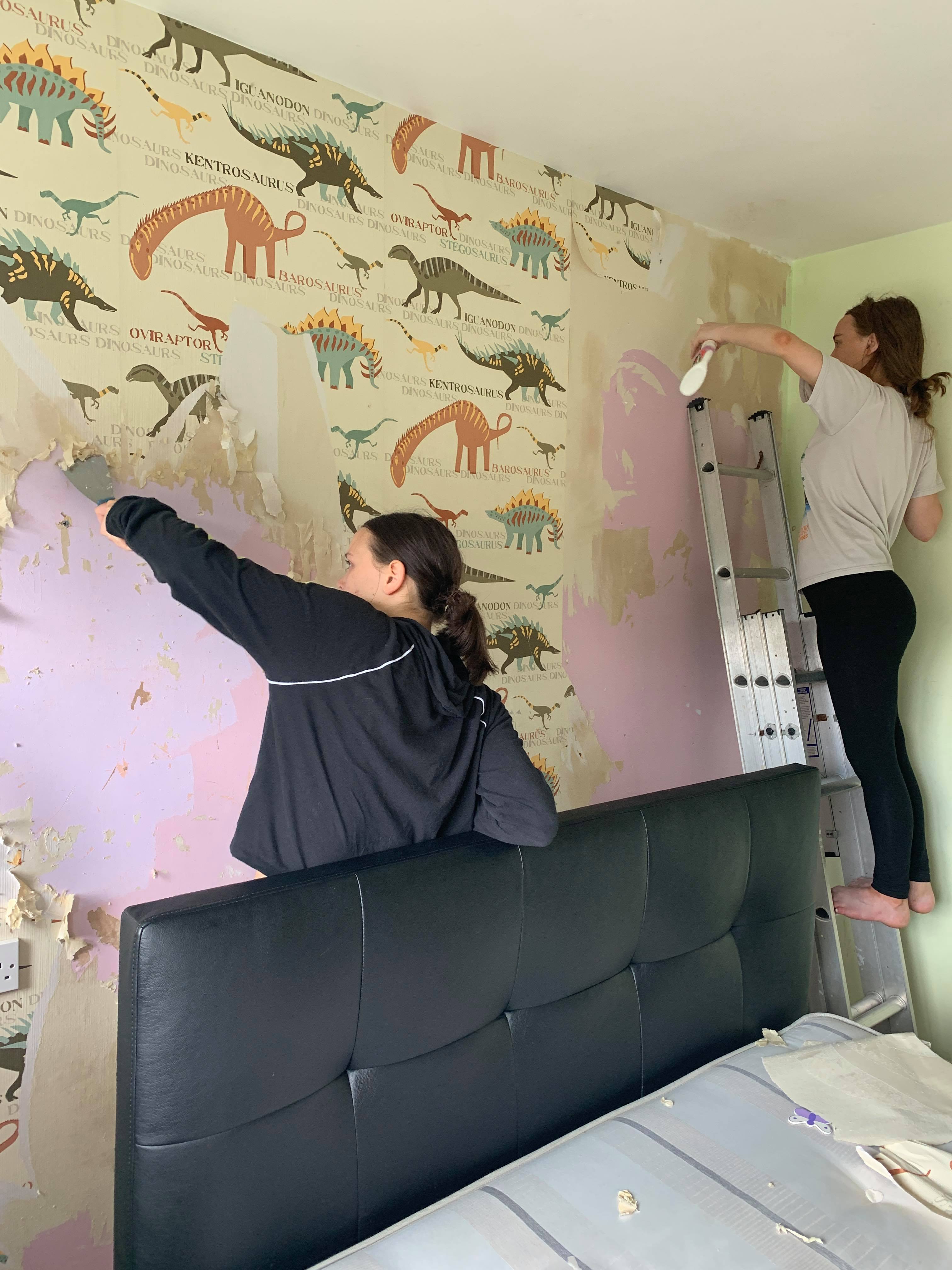 Jay-leigh said that her and her sisters looked online to get an idea of what decor they wanted, ordering bits and pieces when they could which " saved time in rummaging around shops".

She said: “We just went straight to the shops where we knew there was something we wanted to buy.

"We collected around for bedroom decor from places like Primark, B&M and H&M. A trick we used was to get a few expensive candles from H&M and then a few cheaper ones from B&M and Primark.

“This is a good trick to make the area look more luxurious even without spending too much due to having a few more expensive items. Even then they weren’t expensive they just looked a bit more luxurious."

A really good way to also make a space look like you have spent more money than you have is going to Homesense, the TK Maxx version of a home shop

To make the photo wall, the girls got some snaps printed from awebsite where you get free pictures posted and all you pay is postage, which only cost them a few pounds.

"We got the photo frames from Primark for a couple of pounds each, and it ended up looking like a really nice feature wall and it only cost around £30," she said.

"A really good way to also make a space look like you have spent more money than you have is going to Homesense, the TK Maxx version of a home shop.

“At Homesense, we got a really nice wicker basket for £25 that was meant to be around £60, and a few bedroom decor pieces like a beauty box and cotton pad holder." 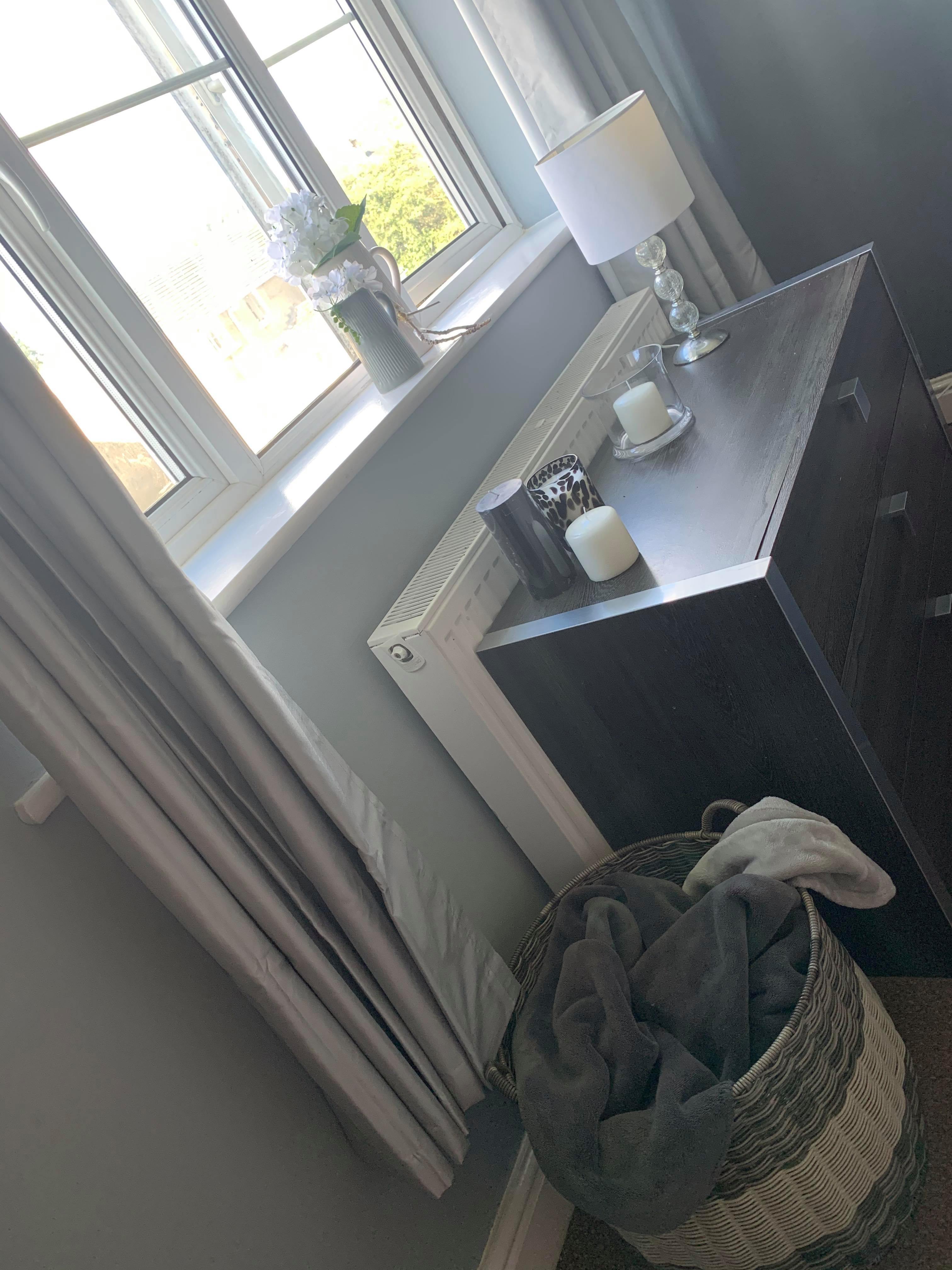 Jay-leigh said that Homesense and TK Maxx sell some really nice expensive items for a lot cheaper than the retail price, and said there are so many hidden gems in there.

Calling on the help of some family members, Jay-leigh said that her aunt picked up some cushions and a curtain pole from Dunelm as a birthday present which cost around £70.

Speaking off the labour involved, Jay-leigh said: "The hardest part of us doing it was when we realised we hadn’t properly stripped the wallpaper paste off the wall from the prior wallpaper and then painting over it, as the paint wouldn’t dry and it went really blotchy.

"So we literally had to scrape and wipe all the paint off the wall, re-clean it about three times and then re-paint it, which set us back a few hours, so next time I would definitely invest in cleaning wallpaper paste off the wall properly before painting over it as it was such a pain. 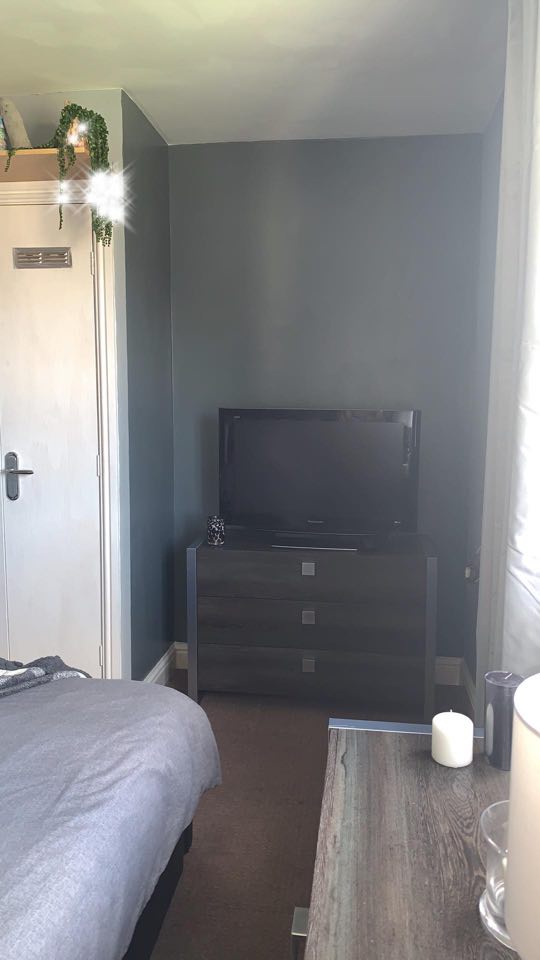 "My sister showed her dad an idea of what she wanted to make for a bedside table lamp, so he went and got the materials and helped her create the hanging lamps and they were gorgeous!

"They weren’t ready when we revealed the bedroom to my mum initially, but my sister surprised her with them a few weeks later and she loved them."

Jay-leigh said the met their budget of £200 and their mum was "over the moon" with her new stylish bedroom.

"It definitely made my mum so happy,” Jay-leigh added.

“She loves her new bedroom and is really happy to just relax and watch TV in there, so that meant me and my sisters did a really good job. 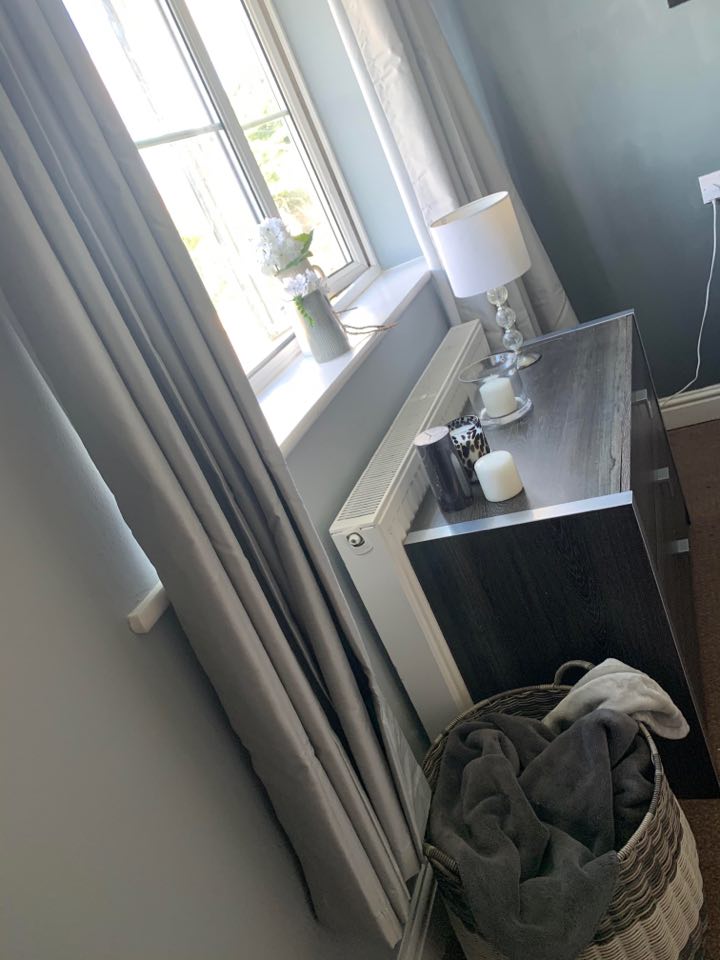 “We were so happy with it because we were doubting whether we would be able to get it done!

Jay-leigh said that her sisters, one who is 18 and twins who are 15, now have experience in decorating their mum's bedroom without her knowing.

Adding: "Not many 15-year-olds can say that, so they should be really proud of themselves."

"All the younger ones carried on as I ended up napping and falling asleep for a few hours on the plastic sheets on the floor because I was so knackered!

She loves her new bedroom and is really happy to just relax and watch TV in there, so that meant me and my sisters did a really good job

Offering her tips for anyone looking to do they same, Jay-leigh said: "Definitely set a plan and time frame for what you want done in a certain amount of time, as we had to get it done as quick as possible without rushing, so look for quick dry paint and paint that doesn’t need many coats.

"Get as many people helping as needed and make sure you have enough supplies such as paintbrushes and rollers because me and my sisters were having to juggle a few between us which wasn’t ideal.

“My 18-year-old sister was getting ready to go to uni, and my little sisters were preparing for school to re-open for their final year at high school.

"They were stressed about school and college due to not being there for months so I think this gave them something really positive to do for my mum as she’s worked throughout lockdown." 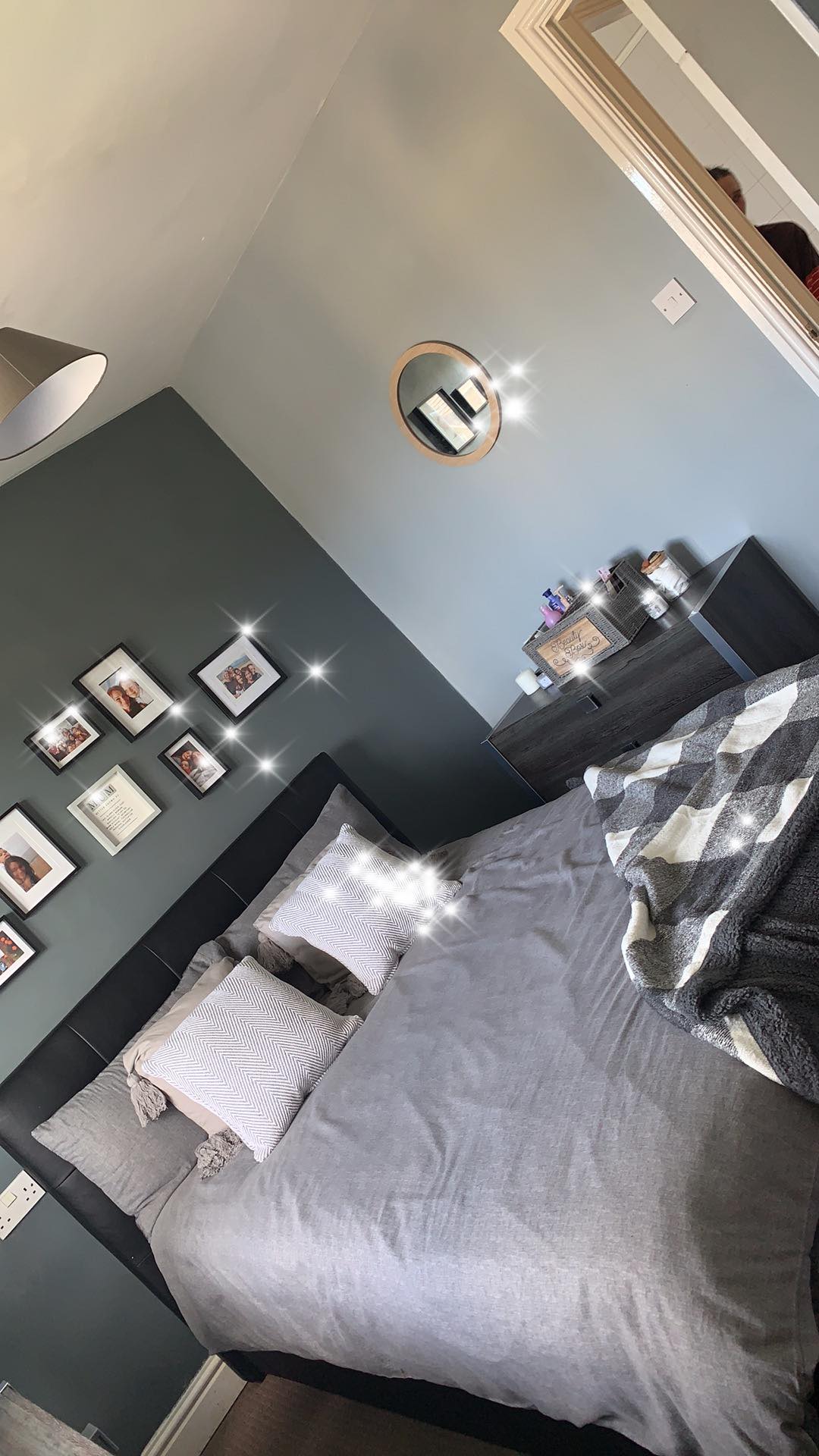 And continued: "I was nervous at first about doing it on a budget as I didn’t know whether I would have enough money to buy everything needed, but prioritising the necessary things first helps, as well as looking around for the cheapest but good quality items.

“If I saw something for one price in one shop I’d make sure to see if I could get it anywhere else cheaper first, and usually you can always find cheaper items that are similar from different shops."

She also said: "Don’t be afraid to buy budget decor from places like B&M because once the room is re-painted it makes the decor look a lot more expensive than what it is!”

Tom Church, co-founder of LatestDeals.co.uk, comments: “What an amazing surprise Jay-leigh’s mum must have had when she came into her bedroom and saw this chic grown-up space instead of dinosaur decor!

“Jay-leigh and her sisters have pulled off an amazing transformation for £200.

“Jay-leigh has lots of amazing tips for redoing your home on a budget: seek out bargain decor from the likes of B&M and Primark, add expensive-looking features such as a gallery wall and recruit friends and family to help pull together to get a project done!”

We also shared how a mum transforms daughters’ fussy floral room by giving it a £4 Dalmatian makeover – and there’s loads more storage too.

And we revealed how a DIY fanatic completely transforms three-bed house in three weeks & did it on the cheap thanks to Dunelm & Ikea bargains.

Plus we reveal the best home transformations you can do for under £30, from hotel-inspired bathrooms to stunning kitchen makeovers.

Preserved DNA helps crack case of 5-year-old Montana girl killed in 1974
We and our partners use cookies on this site to improve our service, perform analytics, personalize advertising, measure advertising performance, and remember website preferences.Ok