Will Miller remembers skateboarding along the perimeter of his family’s home, a marble-trimmed glass box in Columbus, Ind., designed in the 1950s by Eero Saarinen. His record time for circumnavigating the 6,800 square-foot building was about two minutes: “I was really booking,” he said recently.

Mr. Miller, now 63 and a foundation president in New York City, also recalled performing back flips onto the living room seating pit, upholstered by the designer Alexander Girard, and playing spy among trees laid out by the landscape architect Dan Kiley. The property, which is now a museum, gave him a lifelong taste for airy, clean-lined design. Sunlight pouring in through its skin and skylights, he said, was “definitely cheery and warm and, in that sense, optimistic.”

Recollections from people like Mr. Miller, who grew up in famous experimental buildings, are increasingly prized among historians, preservationists and architects. What was it like to be a youthful guinea pig, in places that were idealistic, transparent and prone to roof leaks?

Coryn Kempster and Julia Jamrozik, who teach architecture at the University at Buffalo, are finishing a book and exhibition project, “Growing Up Modern.” They have traveled widely to interview members of the first families who lived in European homes designed by architects such as Mies van der Rohe and Le Corbusier. The subjects’ emotions “ranged from embarrassment and apathy to admiration and nostalgia,” the couple wrote in a 2018 essay.

One interviewee remembered colorful cubbyholes at a 1930s house designed by Hans Scharoun in Löbau, Germany. Another described dragging his mattress onto a concrete cantilevered balcony in a 1930s rowhouse that the Dutch architect J.J.P. Oud built in Stuttgart. (He wanted to sleep under the stars.) Gisèle Moreau, a retired English teacher who has lived since her girlhood at the Unité d’Habitation in Marseille, France, a 1950s apartment complex by Le Corbusier, recalled sunbathing along a rooftop pool’s undulating concrete rim and doing homework on sliding walls made of chalkboards. Some of her playmates, she said, deemed the building “too odd, too different,” but others “thought it was fun to live here.” 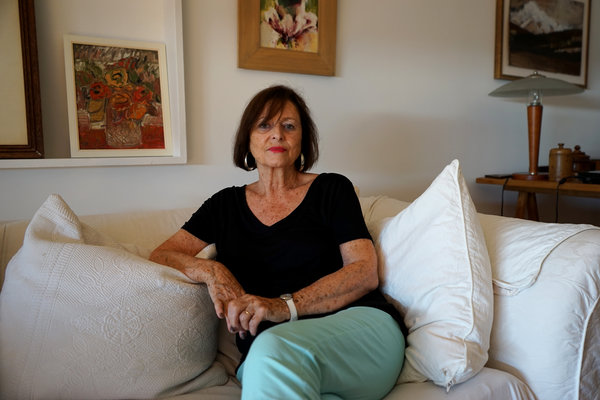 Ms. Jamrozik said recently that there is some urgency to the project, given the advanced ages of the eyewitnesses. She added that she and her husband, in their own design work, are taking into consideration how children might experience and remember details, even just the sound of footfalls on a wooden entry ramp. “We’ve found it very generative,” Mr. Kempster said. “It immediately produces ideas.”

“Growing Up Modern” is also the title of the writer Jennifer Kabat’s memoir in progress. She spent her 1970s childhood at Hollin Hills, a subdivision near Alexandria, Va., which the architect Charles M. Goodman and developer Robert C. Davenport promoted as “far ahead of conventional design.” Along the cul-de-sacs, roofs came in shallowly pitched, flat or butterfly formations, wood planes were left unpainted, and bricks were rescued from demolished warehouses.

Ms. Kabat’s parents, Sandy and Robert Kabat, said they believed that pared-down architecture and objects could foster meritocracy and cooperation and “lead to a better world,” she said in a recent interview. The family shared progressive political leanings and communal parklands with other original inhabitants, while a few neighbors led secret lives working for the C.I.A. Ms. Kabat went through a “youthful rebellion,” she said, and spent years longing for a conventional colonial home and “a canopy bed with curtains that would keep me safe from the world.”

Ms. Kabat and her husband, David Rainbird, recently finished building a home in upstate New York with ribbon windows and a shallow roof pitch, in homage to Hollin Hills. They display modernist heirlooms including teak and fiberglass chairs and chartreuse Russel Wright dishes. Her childhood home has remained in the family, and other Hollin Hills natives live nearby. “You don’t think of subdivisions breeding intergenerational connections like this,” she said, “but for us, it’s got this weird Proustian power.”

In researching the book she interviewed the architect and critic Michael Sorkin, 70, another child of Hollin Hills. At his Manhattan office, he keeps his parents’ Scandinavian brown-wood armchair alongside his desk, although its joints have grown rickety with age. The Virginia subdivision’s aesthetic and idealism, he said in a recent interview, were “decidedly formative.” Although many of his building designs have swoops and faceted forms, he occasionally specifies flat or butterfly roofs and rectilinear footprints in keeping with Hollin Hills’ architecture.

“I revert to some Hollin Hills-isms when I have to go serious,” he said. In an essay for the subdivision’s 50th anniversary book, he recalled that C.I.A. agents in trench coats sometimes checked up on each other along the cul-de-sacs. But over all, he concluded, “Hollin Hills is one of the truly happy experiments in modernity.”

Modernist preservation groups like Docomomo have gathered memoirs from people who grew up in innovative buildings, and on Docomomo’s group trips to landmarks, participants share anecdotes of youthful experiences with modern architecture.

“There’s definitely a built-in camaraderie,” said Rachel Solomon, the founder of Honor Code Creative, based in Boston. She spent her childhood in a 1930s house of fieldstone-trimmed wood and glass designed by Henry B. Hoover in Lincoln, Mass. When she joined a Docomomo pilgrimage to the Miller house in Indiana, it seemed “totally in the same spirit” as Hoover’s work, she said. Modernism’s openness shaped her worldview; she has been drawn to unpretentious typefaces and aboveboard communication, among other forms of authenticity. “I just appreciate people who show you what they are from the beginning,” she said.

The children of modernism have been brought in to help restorers as well. Nora Huvelle, a retired management consultant in Belmont, Mass., has given advice to subsequent owners of her childhood home, a 1950s slab of glass and cedar in Litchfield, Conn., designed by John M. Johansen. She has pointed out “what was original and what was not,” she said — in the 1970s, for example, her father had installed a red-painted chicken coop, which has since been removed.

She remembers where the floor’s radiant heat pipes created patchworks of warm and cool underfoot, and how to slither outdoors unseen through slit windows at ground level. She has inherited artworks by Alexander Calder, who was a family friend. Some ended up water damaged because of roof leaks; Mr. Johansen and his coterie had not yet mastered the art of girding modernism for New England winters. The place is in such good shape now, Ms. Huvelle said, “It’s lovely to go check on it and see people living in it and enjoying it.”

Mr. Miller said he likewise enjoys sharing his expertise when he gives insider tours of his family home. He explains playful details, like his initials woven into the den’s rug. Columbus, and the architectural world at large, he added, benefit from the survival of the building with its original décor and landscape: “It’s a significant cultural asset.”

Ms. Moreau, the longtime Unité d’Habitation resident, recently said she has grown accustomed to being asked about her memories and the architecture’s importance. Each year, thousands of architecture fans descend on the Unité, taking photos even in the bathrooms. “Sometimes I think it’s a bit nuts,” she joked. She has visited Le Corbusier’s works as far afield as Harvard’s campus and Chandigarh, India. She still feels a thrill at the sweeping sea views from her building’s rooftop, she said. And she finds some comfort in aging while rooted in architecture that made waves when it was new. Even as a girl, she said, “I just understood it was a special place.”