On a Friday evening in October 2015, Amol Somnath Naik wanted to head home for the day. He was working for Google at the time, and had spent the week accompanying an out-of-town executive to meetings in Atlanta. The final event of the week was a dinner to discuss diversity in the city’s tech industry.

“I had been staffing the exec for important meetings all week, and I really just wanted to go home on Friday night,” Mr. Naik, 41, said. To this day he isn’t sure what persuaded him to go to the event, but “something really pushed me into that car.”

At the dinner he met Tricia Thorp Whitlock, who was hosting the event as part of her work for a start-up incubator that was focused on minority entrepreneurs. Mr. Naik asked Ms. Whitlock and her colleague to lunch the next week, where Mr. Naik and Ms. Whitlock got to know each other better.

“At lunch I thought he was just super handsome and really brilliant,” Ms. Whitlock, 32, said.

She invited him to dinner and a Nathaniel Rateliff concert a few weeks later in hopes that she could move their relationship from work acquaintances to something more romantic, and was surprised when Mr. Naik showed up with his law school roommate who happened to be in town that night.

“It was only after the fact I realized that was a pretty brave move to pull in some ways,” Mr. Naik said.

“We were having so much fun I honestly didn’t really mind,” Ms. Whitlock said. “We danced the night away at the show and have been together ever since.” 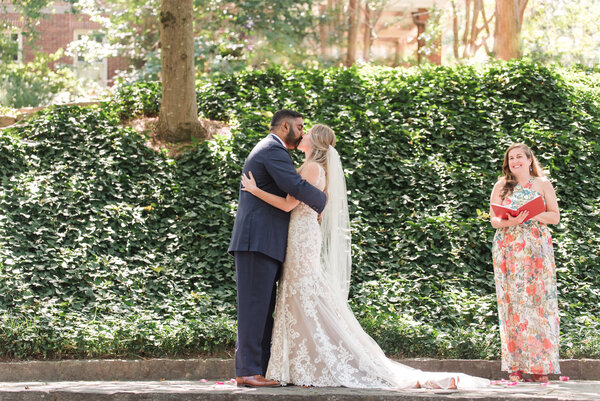 The couple soon moved in together, and in December 2018 Mr. Naik made up an excuse to take Ms. Whitlock to New Orleans. He had been planning an elaborate engagement for weeks, which included a second-line band to lead them through the city. But while they were waiting in the Atlanta airport for their flight to New Orleans to take off, the band leader called to tell Mr. Naik that he had a conflict and wouldn’t be able to help him with his engagement after all. Mr. Naik quickly searched online for “New Orleans Wedding Proposal,” and found a gondola that went around New Orleans City Park. The gondolier just so happened to have an opening during their trip, and Mr. Naik proposed to Ms. Whitlock while they floated on the water.

“It ended up being a wonderful experience,” Mr. Naik said.

Ms. Whitlock is the chief operations officer of Startup Genome, a policy advisory firm that helps governments foster start-up and entrepreneurship, in Atlanta. Mr. Naik works in Atlanta as a principal of the law firm Squire Patton Boggs. Previously, Mr. Naik was the city of Atlanta’s chief resilience officer and a senior adviser to Mayor Keisha Lance Bottoms.

The couple were planning to get married in September 2019 on Jekyll Island, Ga., when Hurricane Dorian hit the Georgia coast. They decided to reschedule their wedding to May 2020, but a few weeks into the coronavirus pandemic postponed it once again. After their second wedding date had come and gone and there was still no end to the pandemic in sight, they decided to set a third date, and find a way to make it work no matter the circumstances.

The couple were married Oct. 3 at Winn Park in Atlanta, followed by a drive-by receiving line at their home in the Ansley Park neighborhood of Atlanta. Lauren Carrier, a friend of the couple and a Universal Life minister, officiated. Anupa Loucks, the sister of the groom, conducted a Hindu portion of the ceremony.

“I fell in love with Amol almost immediately,” Ms. Whitlock said. “He’s just made me really weak in the knees.”