LONDON — Stella Jean and the artist Michael Armitage have put their heads, and hands, together to create two limited-edition sweater designs to be sold on Yoox that will raise money for the Nairobi Contemporary Art Institute.

The two have looked to blend their techniques and aesthetics and make a statement about sustainability, diversity and cultural sensitivity via the colorful sweaters. Both sweaters’ designs have been adapted from paintings by Armitage, a Kenyan-British artist who grew up in Nairobi, and who now works between there and London.

The sweaters, one with luscious green brushstrokes and an unusual giraffe, and the other featuring a watercolor landscape in Nairobi, will launch on Yoox on Oct. 22, and cost 850 pounds or 950 euros each. Jean and Armitage said they used eco-friendly materials and processes wherever possible, while the sweaters are made from 100 percent wool.

The institute was established by Armitage and the Turin, Italy-based Fondazione Sandretto Re Rebaudengo. Their aim is to create opportunities for young artists, and to continue making contemporary art accessible to the public. 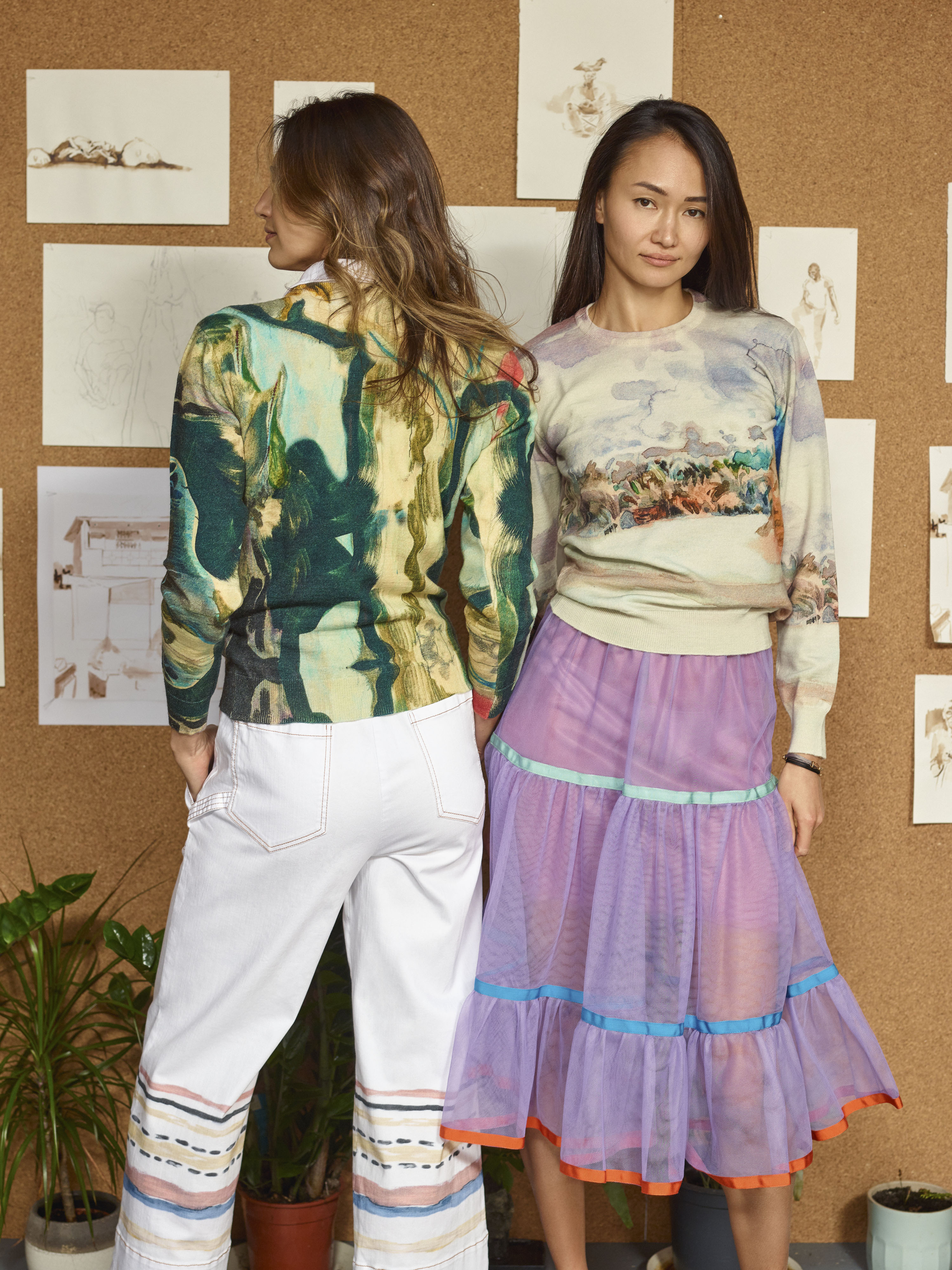 The collaboration marks the second edition of ArtColLab, an initiative started by the Fondazione Sandretto Re Rebaudengo that looks to bring together artists from various disciplines to create one-of-a-kind, limited-edition pieces, with all profits going toward fostering a new generation of young talents.

Armitage said he believes “this time, more than ever, calls for collaboration and mutual support.” He said that Jean, an Italian designer of Haitian descent, has an “ethos of collaboration and support and her insight has been an education.”

Jean said her hope is that “these wearable works of art will be able to convey the profound message of multiculturalism with which they are imbued, as a substantial part of mine and Michael’s DNA. The sweaters we designed are a demonstration of how multiculturalism applied to fashion and art can become a practical example of open dialogue and intimate, everyday confrontation.”

In a joint interview, Jean argued that she and Armitage both use their work as a “communication tool. We use fashion, art for something more than an aesthetic goal.”

She added that the idea of working with an artist to create a wearable piece — with meaning — was exciting. “When you put it on, you are part of it. You live it. It’s like an evolution for art.”

Armitage added: “There’s a sense of responsibility with whatever it is we make. It has to do with society and being part of culture. It was exciting to have this totally different art form, but with very similar concerns, to ask, ‘How do we exist as artists, within our own practices within the world?’”

He was also forced to address more practical concerns, too, admitting that “a sweater works differently from a painting.” While collaborating with a fashion designer might be new to Armitage, he is used to working with fabric. The artist is known for painting on lubugo, a traditional tree bark cloth from Uganda.

Armitage said he and Jean chose his work from 2014, “Giraffe Grows a Doum Palm,” for one of the sweaters. A doum palm is a tree with a forked trunk that bears edible fruit. It is native to Egypt. The painting shows the giraffe with what looks like antlers sprouting out of its head.

The other image is a watercolor based on the Nairobi landscape of Armitage’s youth. “A watercolor has a very different way of expressing and dispersing pigments, so in a way, it suits being printed,” he said, adding that he and Jean liked the way the color picks up on the fabric.

He said that making those images work on a commercial garment was Jean’s task. “I was excited to see how that would translate, what she would see in the work, and how she would position it.”

Jean said she was proud of the project for a number of reasons and was keen to support Yoox and its founder, Federico Marchetti.

“Yoox and Federico are among the few that have always endorsed my quest for racial equality. They have always been there next to me for my missions with the U.N. around the world and with low-income countries. They always supported me — they have not come in at the last minute,” the designer said.

Jean has been a leading advocate for diversity and increased support for Black designers in Italian fashion. In an e-mail to WWD in August, the designer said that Black talents are “still invisible in the business of Italian fashion.”

Jean and fellow designer Edward Buchanan have been mentoring a group of Italian designers of color, whose work went on display during Milan Fashion Week last month. The digital event was a collaboration between the Black Lives Matter in Italian Fashion Collective and Italy’s Camera della Moda and was called “We Are Made in Italy.”