Cantor Rachel Goldman doesn’t often stay for the reception at the weddings she officiates, to “keep things professional,” as she put it.

But this one, in June 2016 in Los Angeles, was different. Both mothers of the bride and groom had known her deceased grandparents, as did some guests, so she was introduced around as “Sam and Dotty’s granddaughter.” Hearing stories about the people she had loved so much, and missed, compelled her to stay.

Now she likes to say that her grandparents had a hand in introducing her to her future husband.

“It feels very cosmic,” she said.

Christopher Ruiz, a groomsman, had caught Cantor Goldman’s eye by escorting the bride’s 90-year-old grandmother serving as “flower woman” down the aisle. He sat across the table from her at the reception, and asked her to dance. Their chemistry was such that, much later in the evening, he asked if she dated non-Jews.

“I won’t marry one,” she replied. That did not deter him from walking her to her car or asking for her number.

Mr. Ruiz, the son of immigrants from Chile and Ecuador, had Jewish friends, but he knew little of what cantors did. His only reference point for female religious leaders were nuns. Intrigued, he texted her the next day with what he now considers some rather embarrassing questions.

Cantor Goldman, who serves Congregation Ner Tamid of South Bay, in Rancho Palos Verdes, Calif., and Mr. Ruiz, a financial adviser at a Los Angeles-based office of Merrill Lynch Wealth Management, grew up within two miles of each other in the San Fernando Valley and are the same age, 36. But they had never crossed paths. 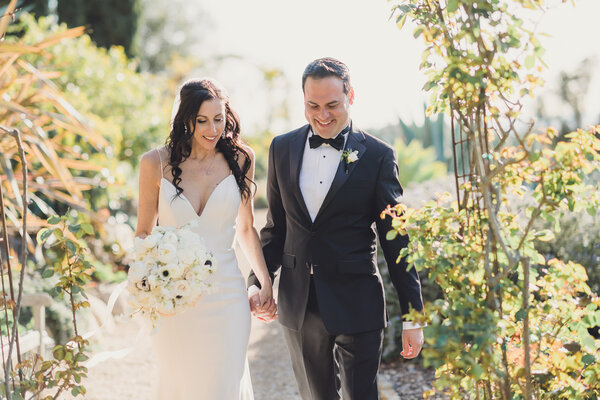 A week after the Los Angeles wedding, they met for happy hour at a bar near Cantor Goldman’s apartment in Sherman Oaks, Calif., which turned into a marathon of a date, as they went for dinner, browsed a New Age book shop, and had more drinks.

As it turns out, Mr. Ruiz had a litmus test of his own. He spontaneously invited her over one afternoon to his parents’ house to meet them, and then, to several other family gatherings, including a cousin’s football party.

“I have a big, robust, Latino family and I wanted to see how she’d handle it all,” he said.

She did just fine. “Rachel can be quite inspirational,” he said. “She’s so ambitious, and forward looking.”

By 2018, Mr. Ruiz was on the road to conversion, and in June 2019, he proposed over dinner at Scarpetta in Las Vegas, overlooking the Fountains of Bellagio. (After she asked to borrow his jacket to ward off a chill, he quickly had to stash the ring box from the jacket pocket under their table). And though he didn’t plan the timing, when he knelt to propose, the fountains erupted.

Euphoric, they returned to their room. Mr. Ruiz promptly fell asleep, and Cantor Goldman went to the craps tables, where she won $500.

The couple, who live in Hermosa Beach, Calif., had planned to marry on the island of Maui in Hawaii in May 2020, several months after Mr. Ruiz’s conversion to Judaism. But their wedding planning was put on hold because of the coronavirus.

They were married virtually March 18 by David Gonzales, a County of Santa Barbara clerk-recorder. On March 21 they had a Jewish ceremony led by Roslyn Barak, cantor emerita of Congregation Emanu-El in San Francisco, at a private home in Montecito, Calif., with 10 guests, and many more participating virtually. Cantor Goldman will be known as such professionally, but is now Rachel Goldman Ruiz.

“I feel like I’ve gained not just a best friend, but this separate entity,” she said, “the relationship between us, which gives me stability and calm.”