Not since George Lazenby took over from Sean Connery as the world’s most overexposed undercover agent, has an Australian shaken and stirred the James Bond universe. Fortunately, the work of designer Michael Lo Sordo is earning raves rather than raspberries in Daniel Craig’s final appearance in the franchise.

At the Australian premiere of No Time To Die on Tuesday, Lo Sordo will finally see his scene-stealing silk gown on screen, worn by actress-turned Bond Girl, Ana de Armas as rookie CIA agent Paloma, in one of the film’s central fight sequences.

“It all started like a spy film,” Lo Sordo said. “I received an email from the film’s costume designer Suttirat Larlarb back in June 2019, requesting one of my dresses for a film shoot in London. It was all hush, hush as they were unable to mention the film’s name.” 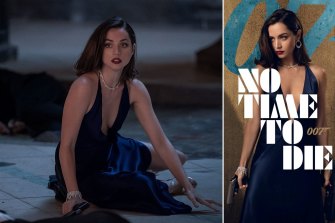 Familiar with the world of espionage, at least on screen, having dressed Rebecca Ferguson in Mission Impossible: Rogue Nation in 2015, Lo Sordo set about creating 10 copies of the navy, silk satin Alexandra dress, with a plunging neckline, open back and handy slit for crippling high kicks.

“They let me know that the dress was for an action sequence and would probably be destroyed along the way.” Following Zoom fittings, where the identity of the actress remained a secret, a final dress for close-ups was handed over in a corridor at the Hotel de Crillon in Paris. Mission accomplished.

In late August 2019, a mysterious box arrived at Lo Sordo’s Sydney studio, printed with the revealing insignia 007. For James Bond fan Lo Sordo, it was an exciting moment, that he promptly forgot. COVID-19 pushed the film’s release date back by months and the designer faced the challenges of lockdowns. Then the posters started to appear. “All of a sudden the dress was everywhere and the hype began.” 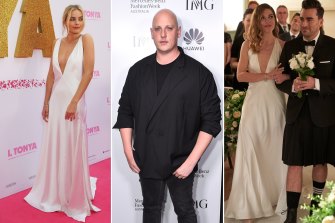 Like many Australian designers, Lo Sordo does not advertise in magazines, relying on runway shows and celebrity red carpet appearances for publicity. There were spikes in sales when Margot Robbie wore a white version of the Alexandra dress to the Sydney premiere of I, Tonya in 2018, followed by the same dress featuring in the wedding finale of Canadian television series Schitt’s Creek, worn by actress Annie Murphy. Reformed chauvinist Bond, however, still manages to outdo the women when it comes to sales power.

“Net-a-Porter promoted the dress when the film was released in London,” Lo Sordo said. “It sold out in two days. We are now working on our fourth lot of re-orders. We are also just keeping up with demand on our online store where it has sold out again and again.”

The seductively fluid dress joins the bikini worn by Ursula Andress as Honey Ryder in the original Bond film Dr No, the fitted men’s staples worn by Honor Blackman as Pussy Galore in Goldfinger and Grace Jones’ wardrobe by French design great Azzedine Alaïa as May Day in A View to a Kill, in the ever-expanding Bond Girl wardrobe. 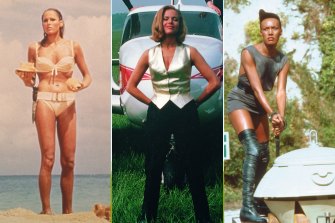 Ursula Andress as Honey Ryder in the bikini that started it all in Dr No (1962); Honor Blackman as Pussy Galore wore clothes with mannish touches in Goldfinger (1964); Grace Jones wearing Azzedine Alaïa as May Day in A View to a Kill (1985).

“Paloma’s mission takes her to a black tie gala, so she has a phenomenal navy gown by Michael Lo Sordo and diamonds, which I think everyone will agree looks incredible on her, but she also has to be able to fight,” Larlarb told US Vogue. “We could have done a jumpsuit with fantastic boots, but she’s the most capable recruit and can do anything James can do—only in heels and elegant dress. ”

After growing his business in lockdown, with dresses now stocked at British fashion institutions Harrods and Browns, along with luxury e-tailers Net-a-Porter and Moda Operandi, Lo Sordo is revelling in his IMDB credits. Having founded his label in 2006, Lo Sordo has successfully rebuilt his brand on the pillar of evening glamour following a series of financial challenges and court cases in 2016.

“To be able to see my clothes on strong, powerful and beautiful women and make them feel empowered is pretty satisfying,” he said.

With the majority of No Time To Die dresses in tatters, Lo Sordo is preparing to donate the original design to Sydney’s Powerhouse Museum. “It’s a little bit of Bond history that means a lot to me.”