The writer Anne Lamott recently sat in the living room of her Fairfax, Calif., house, wearing her signature dreadlocks, a loose cotton shirt and baggy jeans (skinny jeans are definitely not her style). At 65, she was about to get married for the first time.

When asked why she stayed single so long, she replied that she was shy and introverted and hated leaving the house, particularly for parties.

“If I go to a party, I become a Roz Chast character with my arms hanging at my sides and I feel like I’m developing a tic,” said Ms. Lamott, who has published 18 memoirs and novels, many about being a recovering alcoholic, single mother, incessant worrier and late-in-life churchgoer.

Yet in recent years, she found herself admitting to friends and fans (otherwise known as “Annieholics”) that a good marriage was the one thing she wanted but had not achieved. So she joined OurTime, a matchmaking site for people over 50, and forced herself to go on dates and make small talk. “Then, I saw this really handsome, soulful guy on OurTime and he was like me,” she said. “He was hard-core left wing, an intellectual, spiritual seeker.” 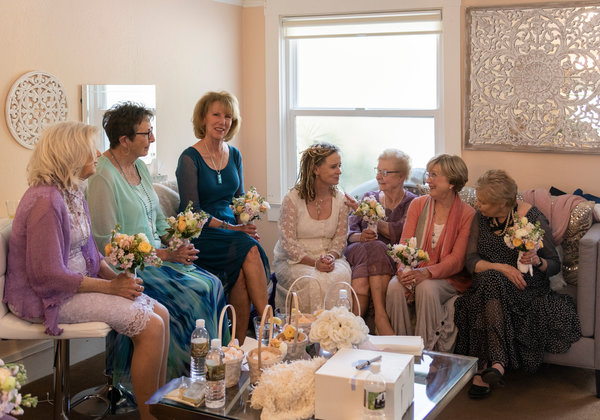 His name was Neal Allen, and she contacted him in August 2016. He promptly wrote back: “You rejected me already!”

He reminded her that they had exchanged messages on the site a few months earlier, but she had stopped communicating with him after learning he was allergic to cats (she sleeps with hers, which could also explain why she hadn’t found a partner sooner). Mr. Allen, 63, had left his job as a vice president for marketing at the McKesson Corporation in San Francisco to become a writer. He lived alone in a house in the woods in Lagunitas, Calif., and he had a wide range of interests that included Plato, bluegrass music, the New Testament and Vipassana meditation. He sounded much cooler than she remembered. “I said, ‘Take me back! Take me back!’” she said.

Mr. Allen, who was divorced twice and has four children, loved her “casual prettiness, “trippy dreads,” “kissable lips” and willingness to tell him everything, absolutely everything, about herself. “That kind of openness, it was like being sucked into a spider web,” he said.

The coffee date was followed, she said, by a “period of not only being in love but being sickeningly in love, it being like a mental illness.”

They spent every day together. They had long, heart-to-heart talks on her secondhand couch about things like how to approach death more mindfully or mistakes they’d made in the past as parents and as lovers. They took daily walks, either on the many trails that cover Mount Tamalpais, or up and down the aisles of Good Earth, a health food emporium in Fairfax, where they invariably bought too much chocolate. He said the only downside of falling in love with Ms. Lamott was that he gained 17 pounds in the first six months.

In some ways, they are opposites. She is afraid of almost everything, whereas he’s afraid of almost nothing. “It never occurs to me that anything will go wrong,” he said. Whenever she got overly anxious about a deadline, or climate change, or whether that shaking sensation was an earthquake, Mr. Allen made a cheese omelet for her. “Neal cooks, he cleans and yet he’s still a man’s man,” said Annette Lopez-Lamott, Ms. Lamott’s sister-in-law. “He respects women and that was very important to Annie who’s very power to the people, women’s rights.”

Crucially, Mr. Neal said, they got each other’s jokes “95 to 98 percent” of the time. “I have never, ever spent time with somebody as funny, as brilliantly funny,” he said. “Living with Annie is like being in a comedy sketch.”

Seven months after their first date, they bought a dilapidated house on a narrow, hidden lane in Fairfax. Now renovated, the house is airy and uncluttered inside, like a sentence with all the extra words removed. Ms. Lamott has her first new couch (all the others have been hand-me-downs) where she and Mr. Allen spend their evenings watching the news on television, dissecting the news, eating dinner and bingeing on dark Scandinavian movies, which they both love. “The level of brown bear-like comfort we find in each other is just amazing,” she said.

There’s also a renovated barn behind the house where her son, Sam Lamott, 29, and grandson, Jax Lamott, 9, live part time. When asked if everyone gets along, Ms. Lamott said, “It’s kind of like a wedding where there are all these disparate elements and you just hope there’s enough love and compromise that everything will work out fine, and most of the time it does.”

On Aug. 30, 2018, exactly two years after their first date, Mr. Allen pressed the pause button while they were watching the United States Open and proposed.

They were married April 13 at Deer Park Villa, an events space near their house, in a redwood grove with Christmas lights swooping between the trees. The 150 guests were asked to “dress happily” and the Grateful Dead song “Ripple” played through speakers as the wedding party, ranging in ages from 9 to 80-plus, entered the grove in no particular order and at no particular pace. There was the sense that anybody could have joined them if they wanted to.

The tall bridegroom towered over everyone, looking somewhat like a basketball player in a black suit, while the bride wore a calf-length white dress she bought on eBay, Mary Jane shoes and a furry white cardigan.

The ceremony reflected the couple’s idiosyncratic patchwork of spiritual and political interests. The officiant, the Rev. William Rankin, an Episcopal minister and a founder of the Global AIDS Interfaith Alliance, read a passage from the benediction at Barack Obama’s 2009 inauguration, pushing for racial equality, global peace and turning tanks into tractors. Jack Kornfield, a Buddhist meditation teacher, presented the couple with his version of a “ring,” a Tibetan singing bowl and a wooden mallet. He suggested they tap the bowl and listen to its ring whenever they had a “How did I get into this feeling?” mood as husband and wife.

The Rev. Tom Weston, a Jesuit priest, also stood with the couple. He didn’t speak much, but he did exude a kind of fatherly benevolence, as he does in some of the bride’s memoirs.

Sam Lamott, the man of honor, read an E.E. Cummings poem; and Marina Allen, a daughter of the groom, sang “Let Me,” a sweet, quirky love song she wrote for the couple.

The bride and bridegroom each took out a piece of paper, and their reading glasses, and recited the vows they had written. Hers were neither writerly nor weighty. She just made a few simple observations like, “Your love has given me permission to be softer, wilder and more real.” His were also spare, mere brush strokes of promises and intentions. “I’d very much like to continue our exploration of love indefinitely,” he said politely, as if he were asking her to dance. The couple have a light touch with everything, especially each other. Out in public, friends said, she’ll just barely hold on to his belt loop, or his sleeve.

They left the grove to the Van Morrison song “Into the Mystic.” Meg Lundstrom, a longtime friend of the bridegroom, said afterward, “I’ve been telling my friends that the smartest person I know is marrying the kindest person I know but I don’t know which is which.”

Everyone gathered inside the “villa,” a rustic house next to the grove, for dinner at long tables that were decorated with pink paper runners and colorful leis. It looked like a child’s birthday party.

Laura Neely catered the dinner, along with her staff of mostly middle-age women who called themselves “the old gangster catering crew.” Ms. Neely said she particularly admired Ms. Lamott for not leaping into marriage, until now. “Getting married now is the best thing ever because that’s for sure going to be your toe-tag husband,” she said.

Now that Ms. Lamott has found her lifelong partner, does she have any advice for those who might still be looking? “If you’re paying attention and making your own life as beautiful and rich and fun as it can be, you might just attract someone who’s doing the same thing,” she said. “You can give up on tracking someone down with your butterfly net.”

A natural cheerleader, especially for underdogs, she also posted this on her Facebook page: “Never give up, no matter how things look or how long they take. Don’t quit before the miracle.”

The Honeymoon The couple will travel to a meditation retreat in Maui, Hawaii. The retreat includes several spiritual teachers including Ram Dass, Krishna Das and Robert Thurman. Ms. Lamott is also a speaker at the retreat.

His and Her Books He is working on an in-depth analysis of the platonic ideals, tentatively titled, “Shapes of Truth.” She is working on a memoir about the last third of life, “when you stop squandering your life force on achieving, and focus on presence, being here, being real,” she said. It includes two prayers, a morning one she named “Whatever,” and a bedtime one called “Oh well.”