WHENEVER we move into a new place, we're always brimming with ideas of ways to put our own stamp on it – but that quickly gets lost in all the practical stuff we have to do first.

In 2007, Gemma and Dean Burton, both 42, moved into their three-bedroom semi-detached house in Higham Ferrers, Northamptonshire, and knew that they'd one day get round to injecting some colour into the place. 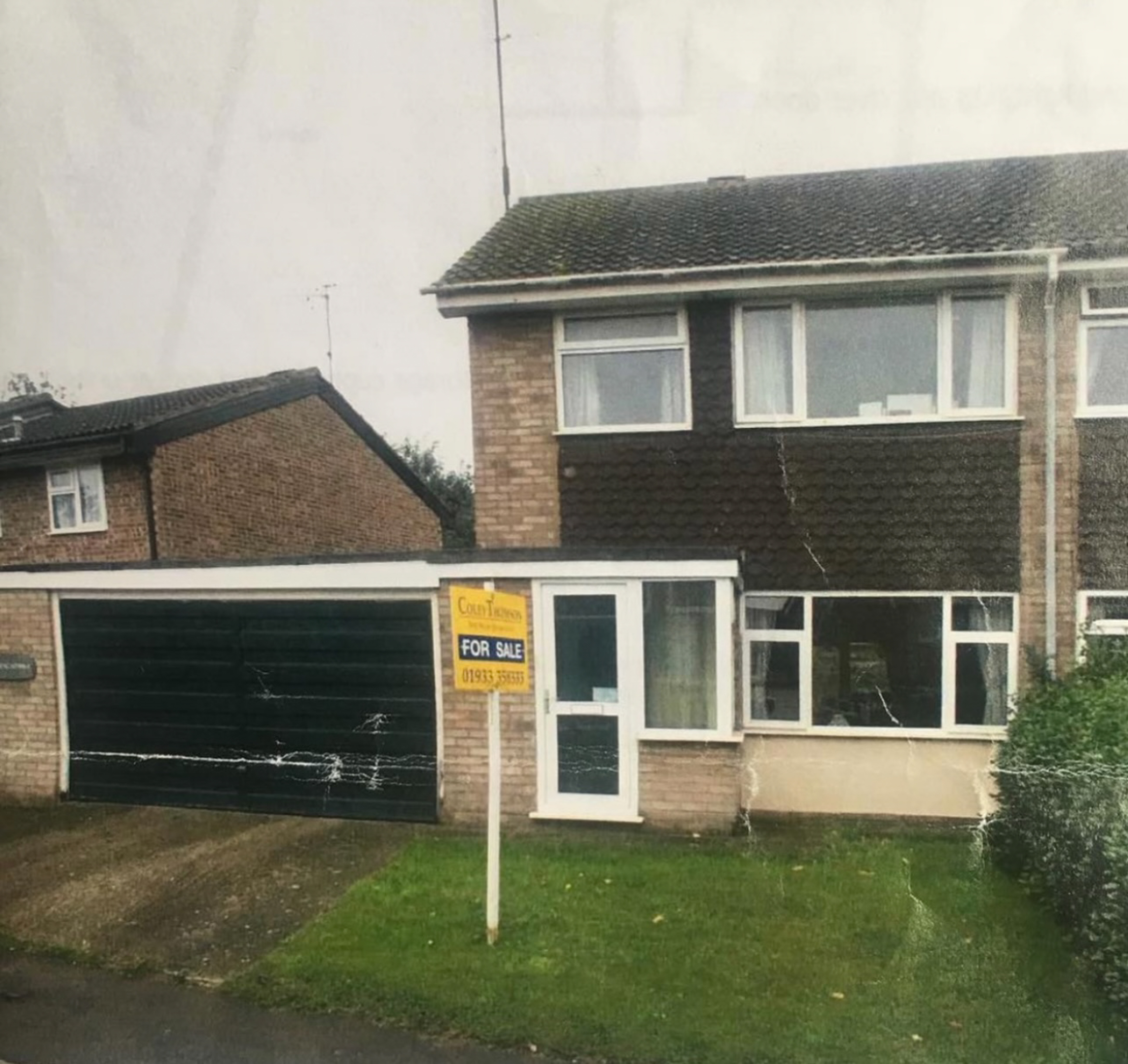 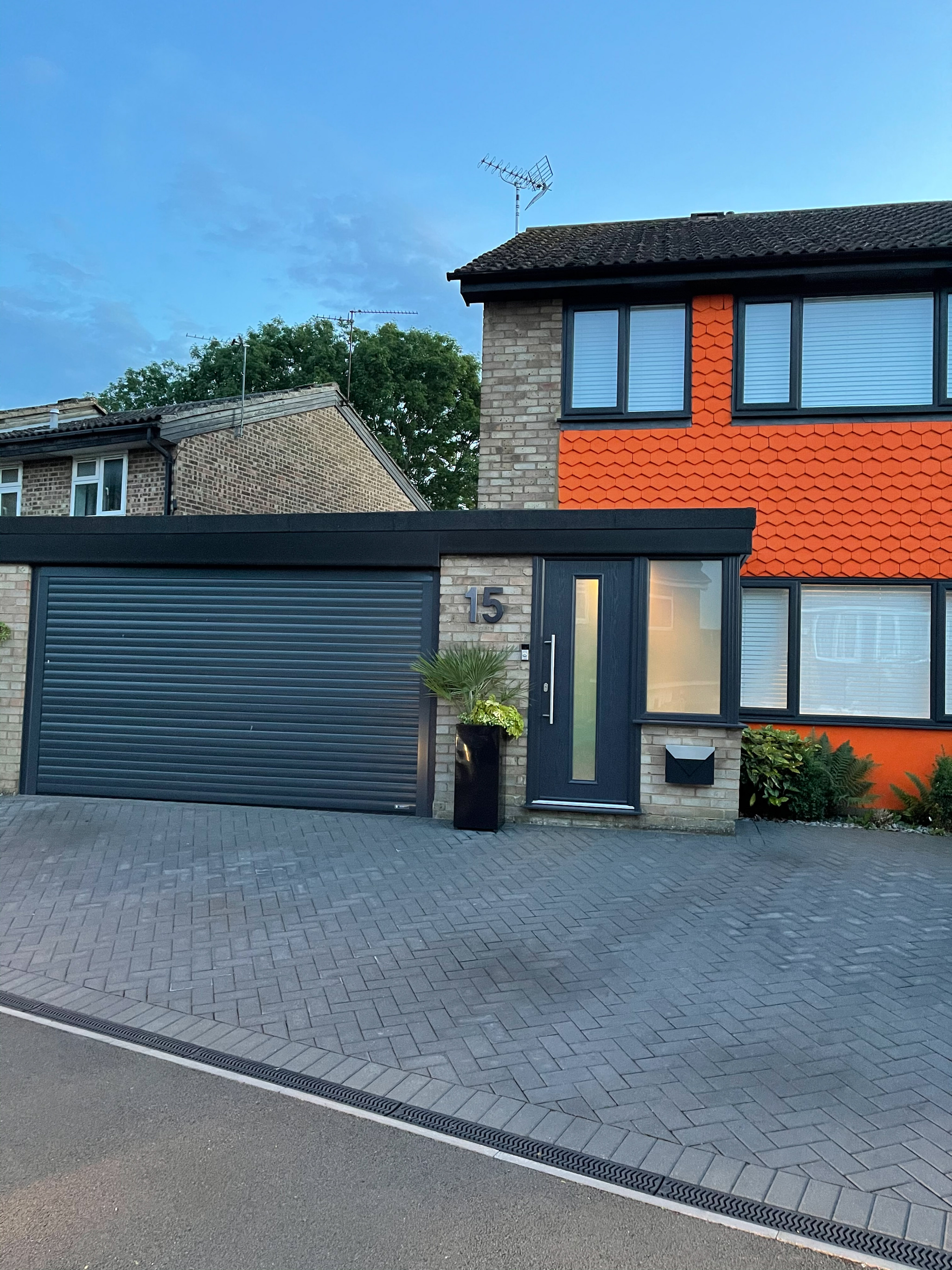 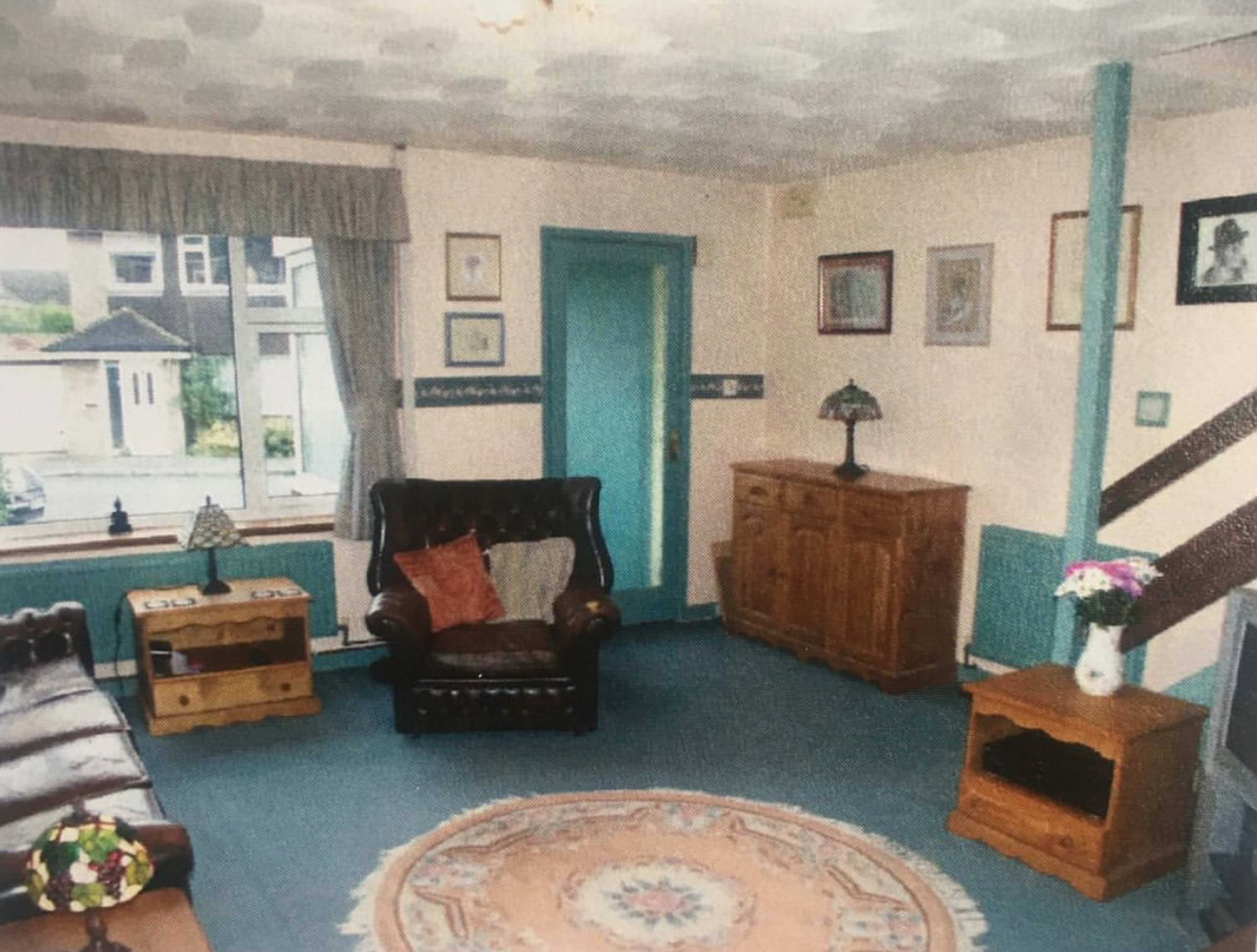 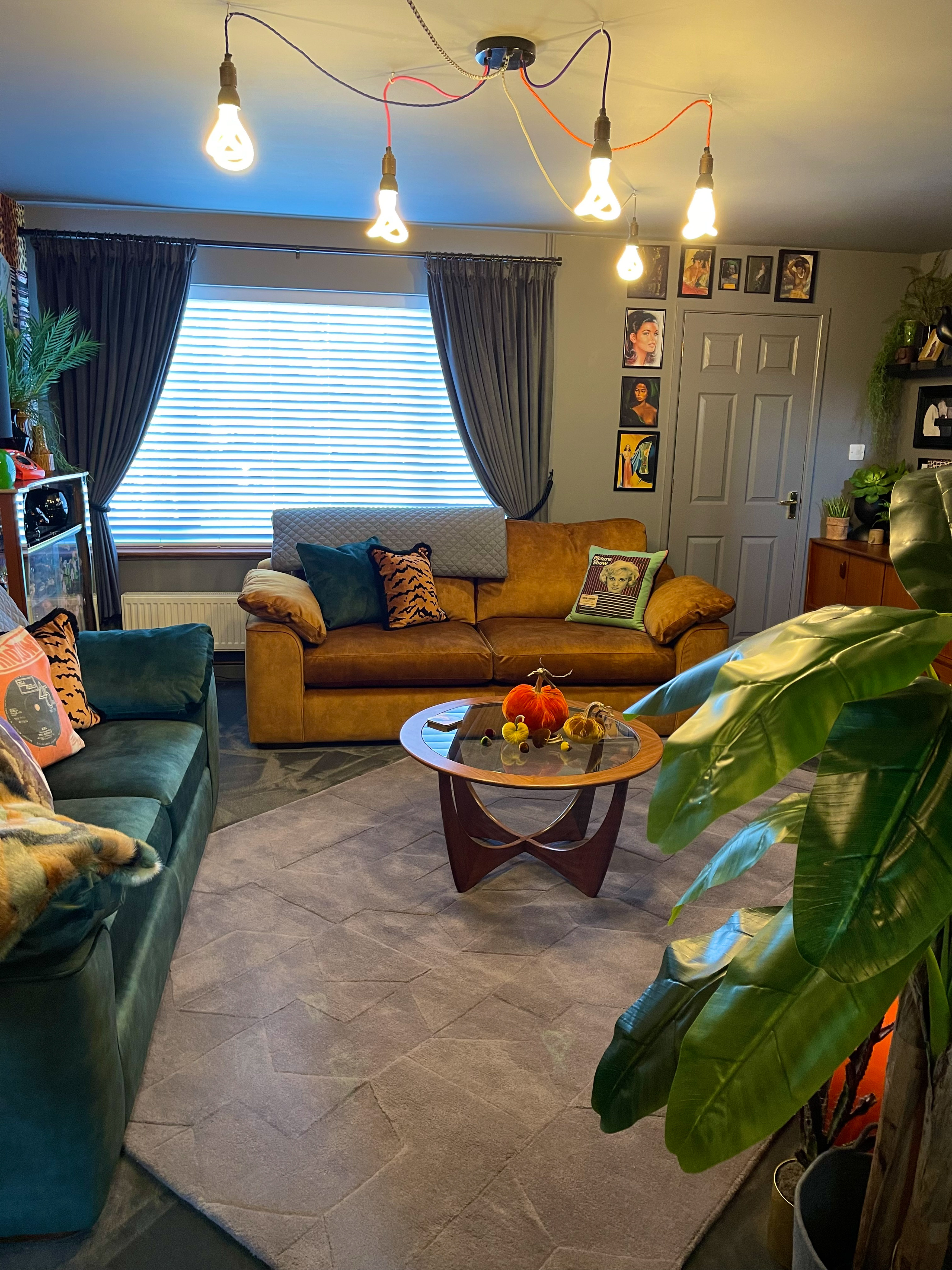 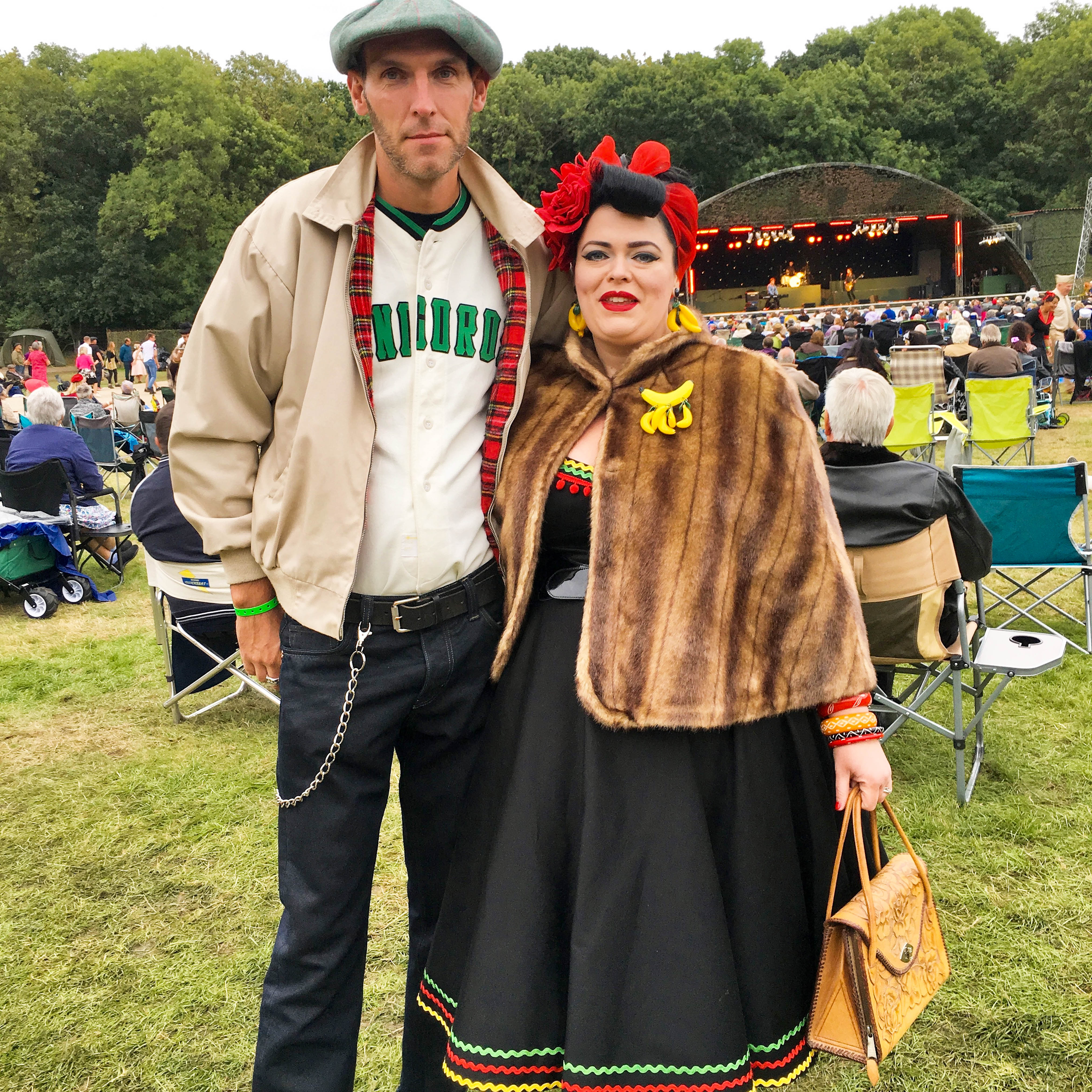 But next thing they knew, 12 years had passed and they were still living with the uninspiring white walls and dated interiors.

So three years ago, the couple – who are wild about maximalism – set about turning their drab house into a dream home.

Gemma said: “We’ve lived in the house for 15 years, and always found the whites and creams of the walls pretty uninspiring.

“I found that I couldn’t live completely plain or be able to live so minimalist, as before the renovation, our house seemed pretty dull looking back.

“We basically ended up revamping the whole house, from the doors to the kitchen and bathroom, and we even added a bar to the garage.

“We had to hire people to do the windows and bathroom, but for everything else, we’ve done it ourselves."

Famous face hides behind a disguise to go skiing – so can you tell who it is?

Over the years, the hairdresser and her railway engineer husband collected over 200 prints from the 1950s and used them to decorate the walls.

“We tried to make the house as colourful as possible and have used greys, oranges, greens and blacks throughout to create contrast alongside the printed wallpaper.

“All of the decoration we did ourselves, so we probably actually saved about £7,000 by not hiring someone to come paint and paper the house.

“We also converted our garage into a bar which cost about £2,000, as we made the mini bar from scratch but added lighting and a pool table as well as a karaoke machine.

“We also had the garage roof replaced, and the doors to make the bar more authentic.

“Having our bathroom and windows done was probably the most expensive part as we had to hire workmen, combined that was £20,000." 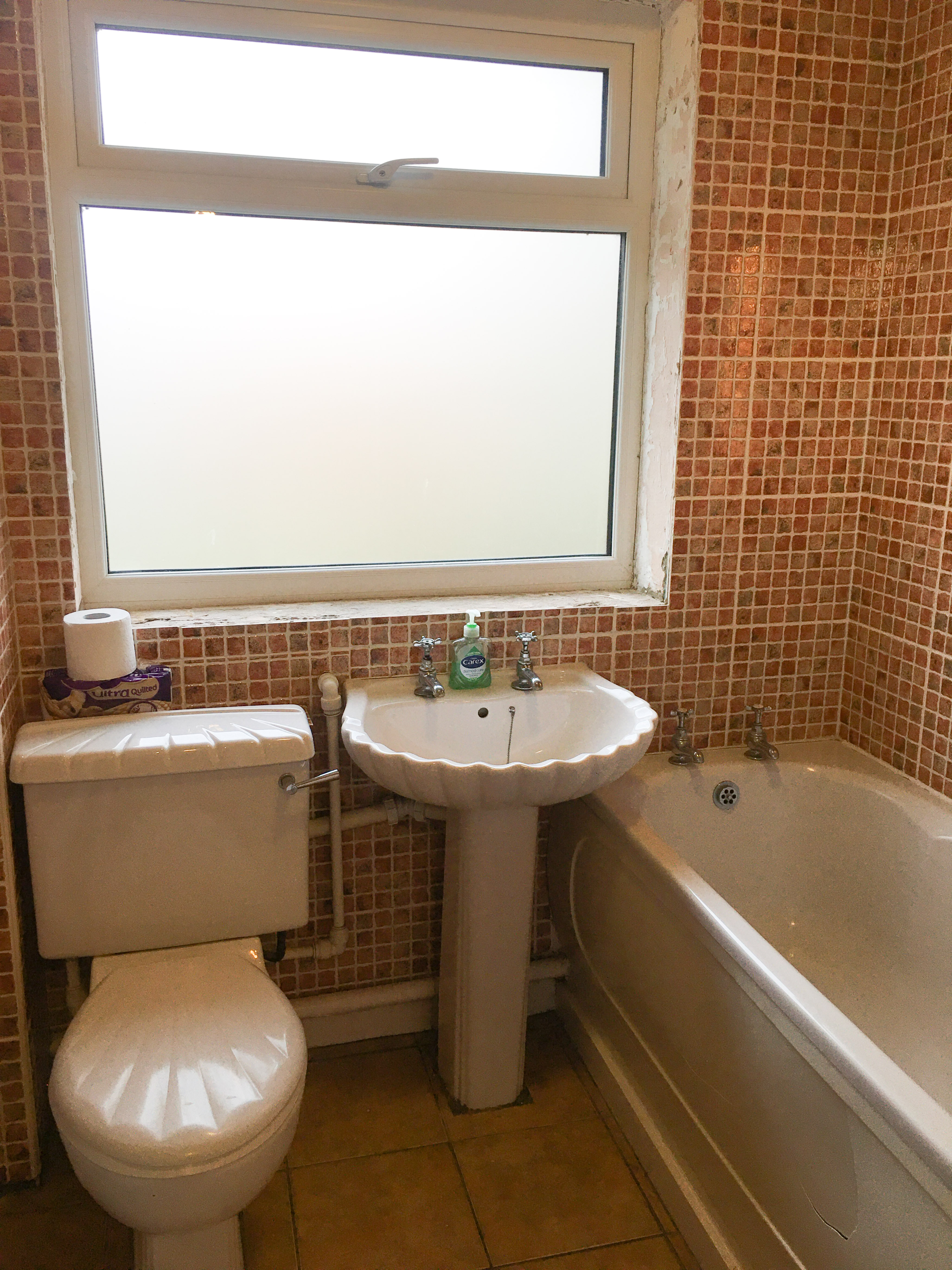 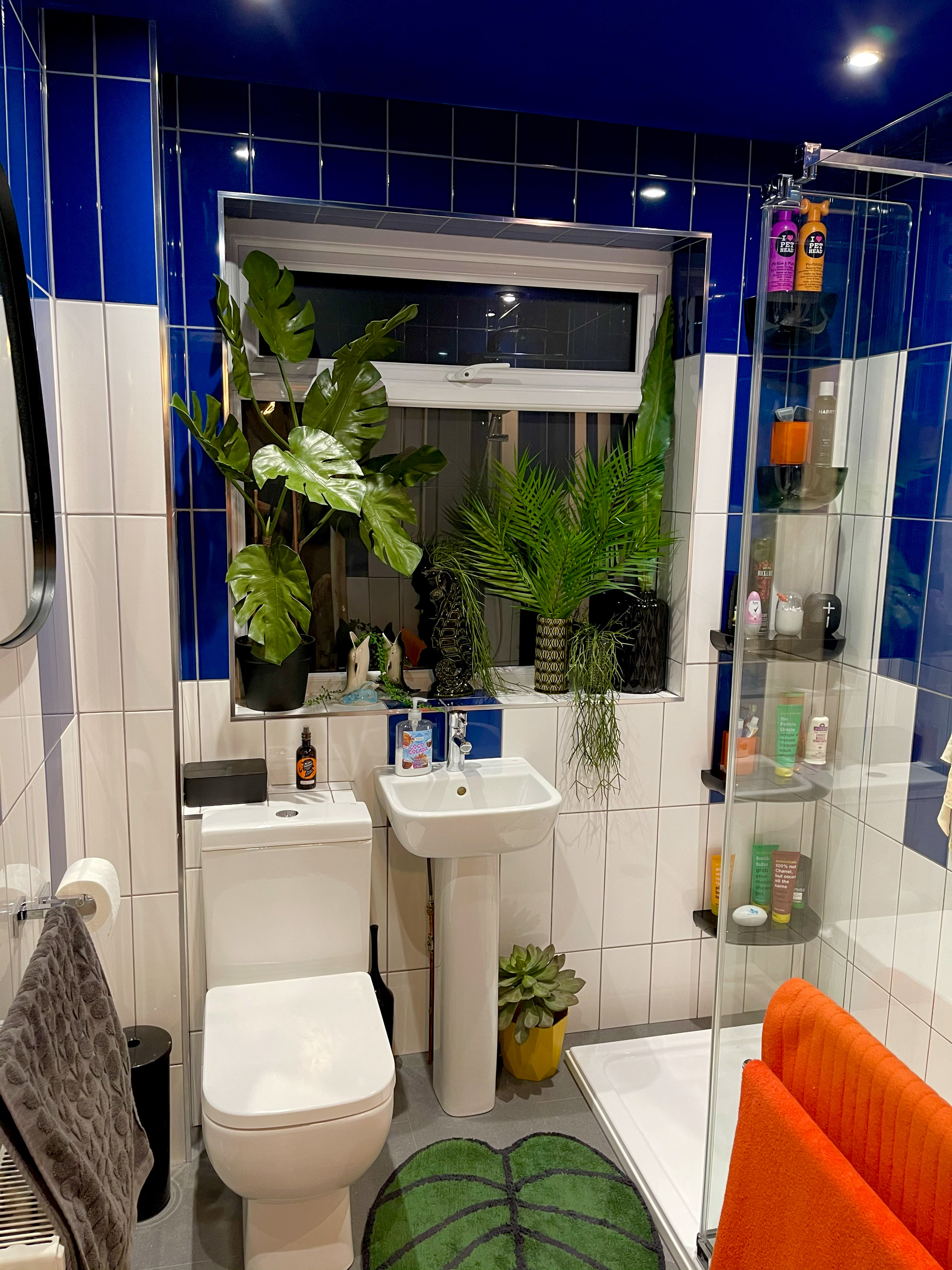 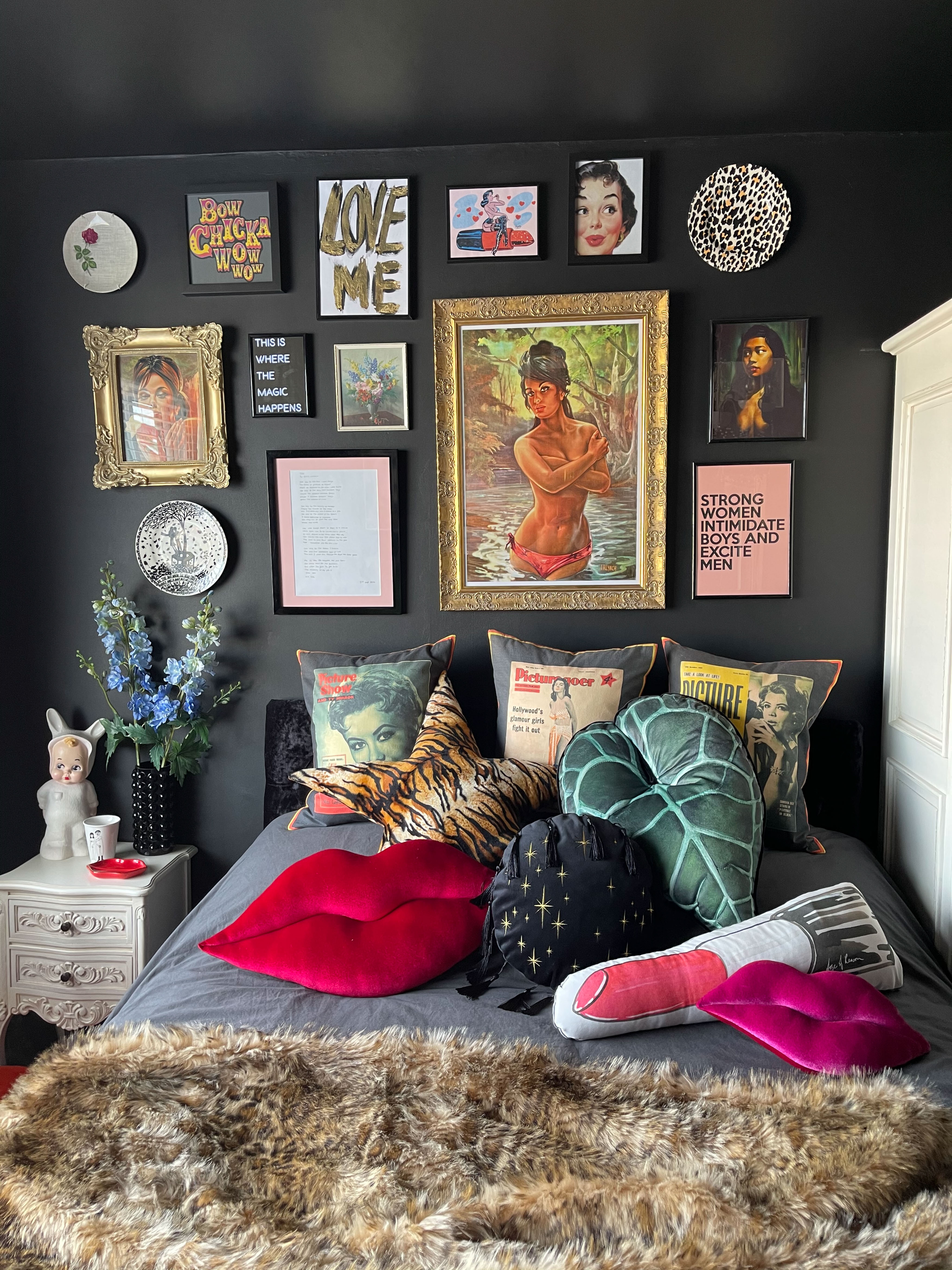 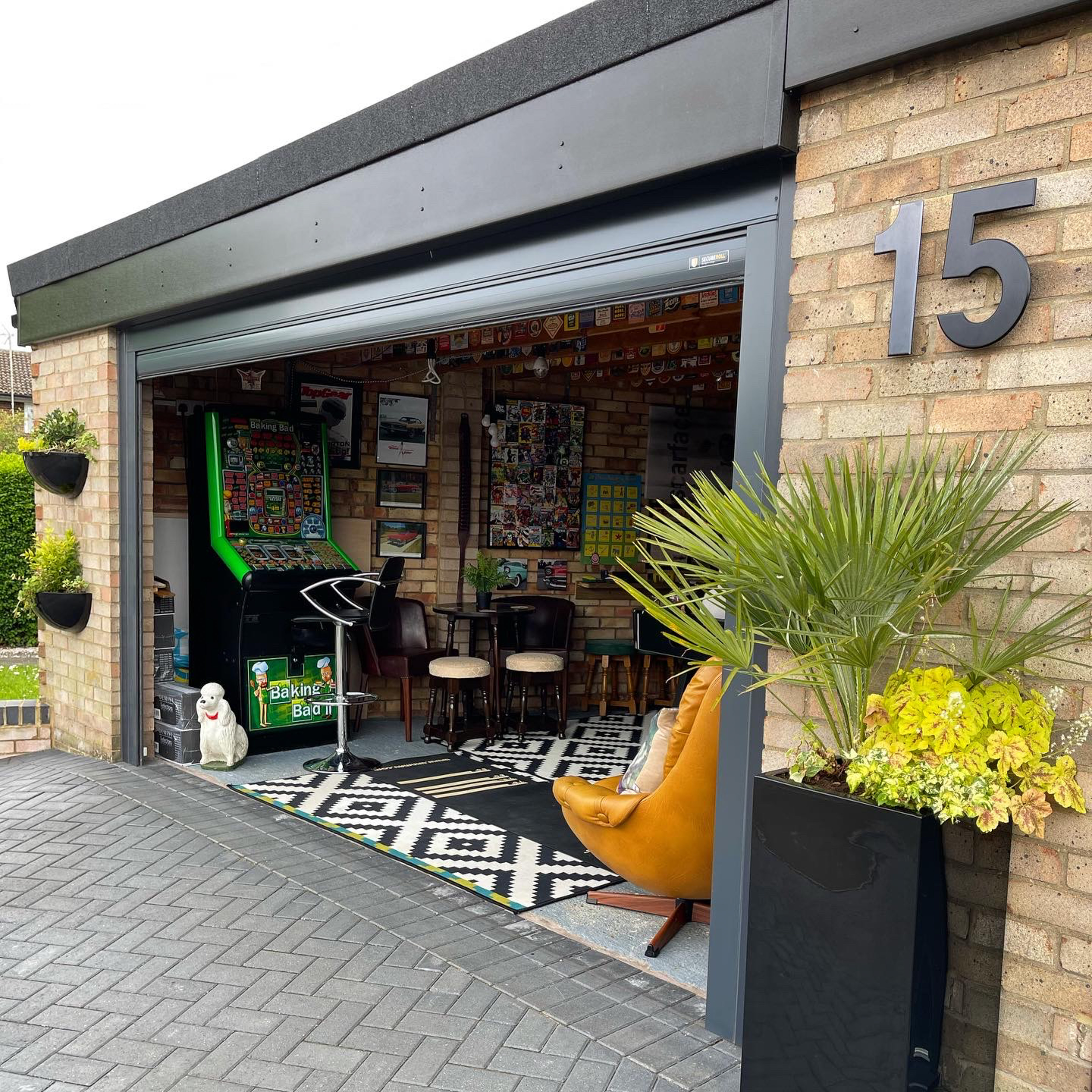 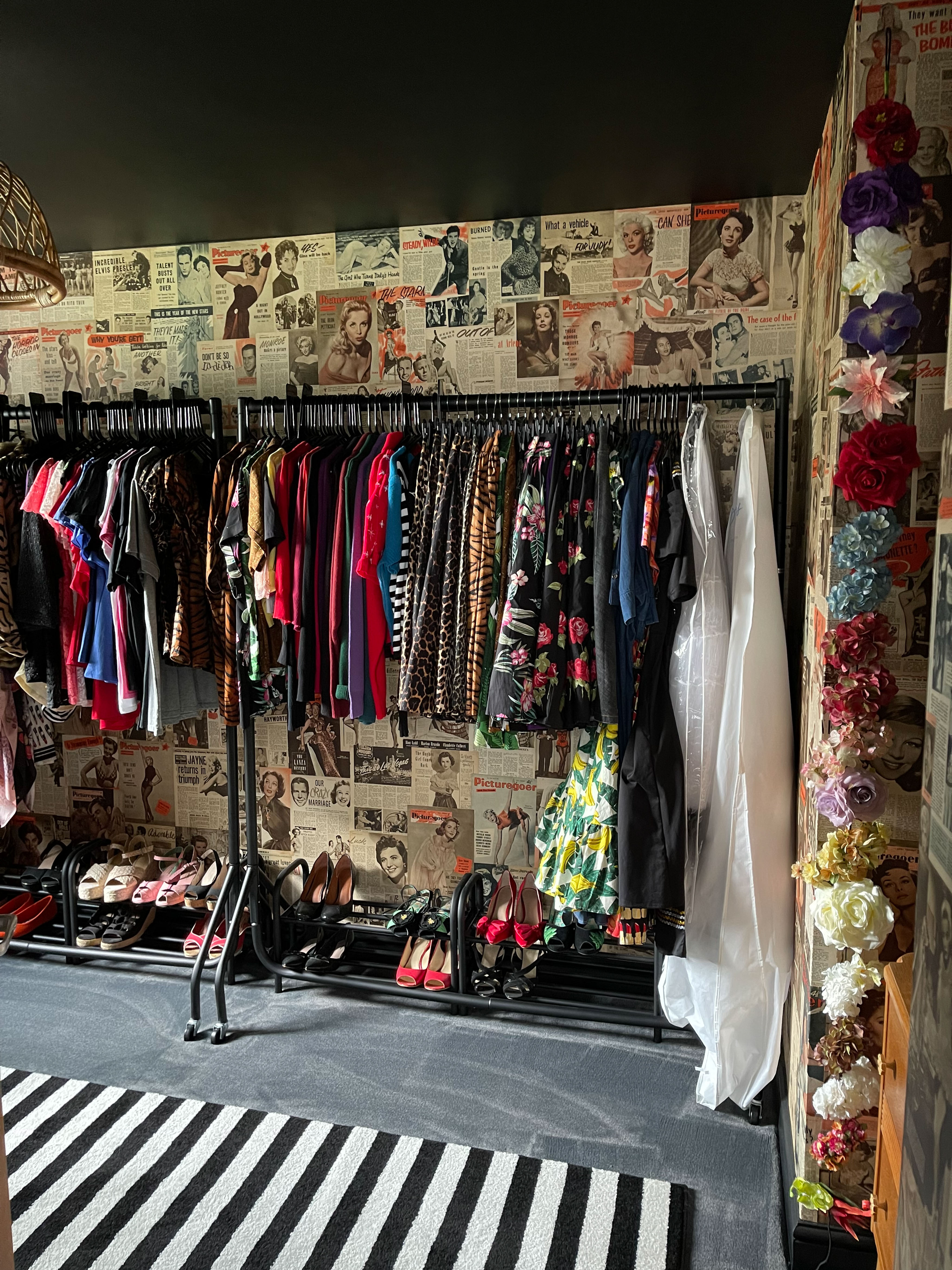 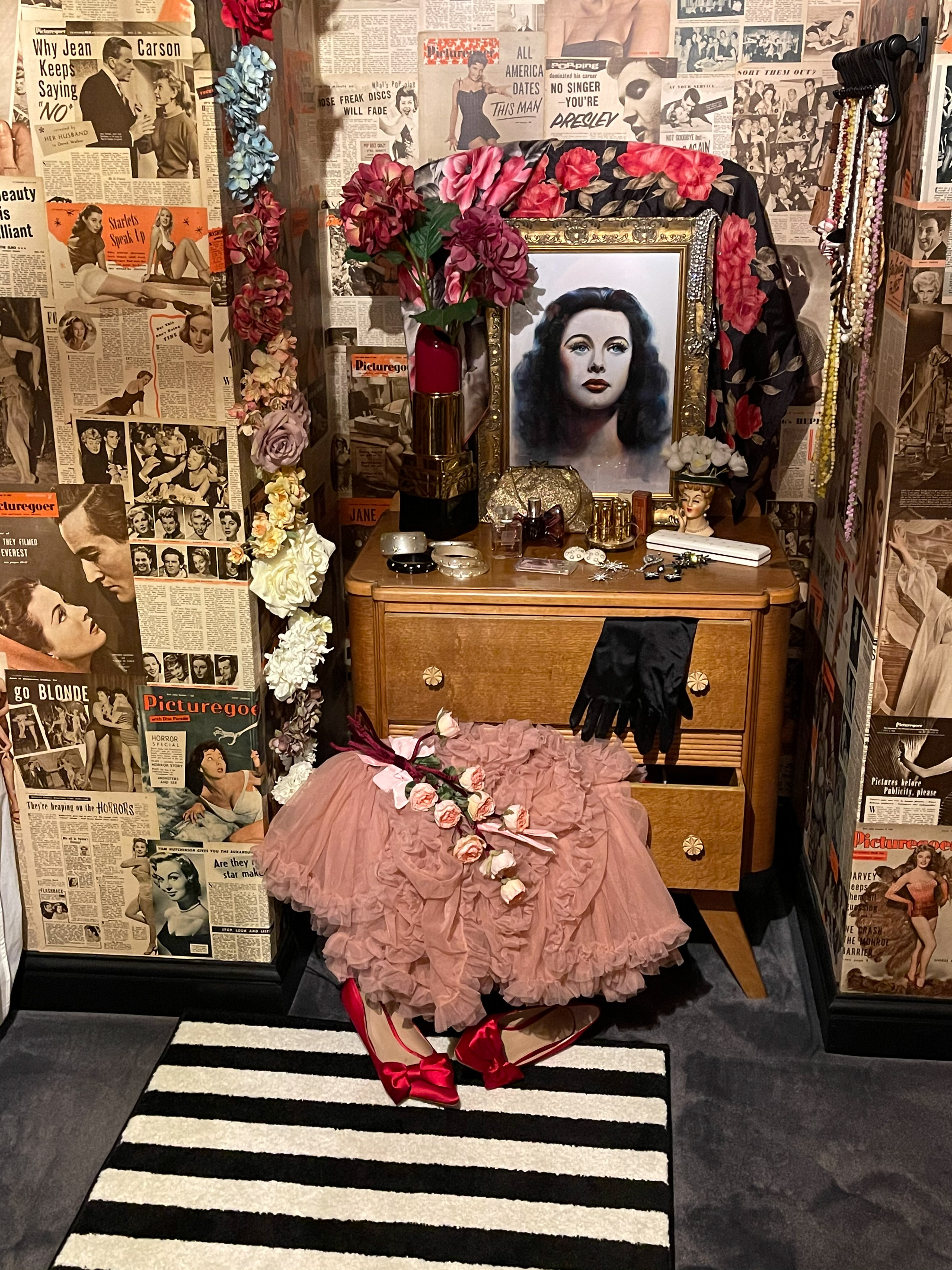 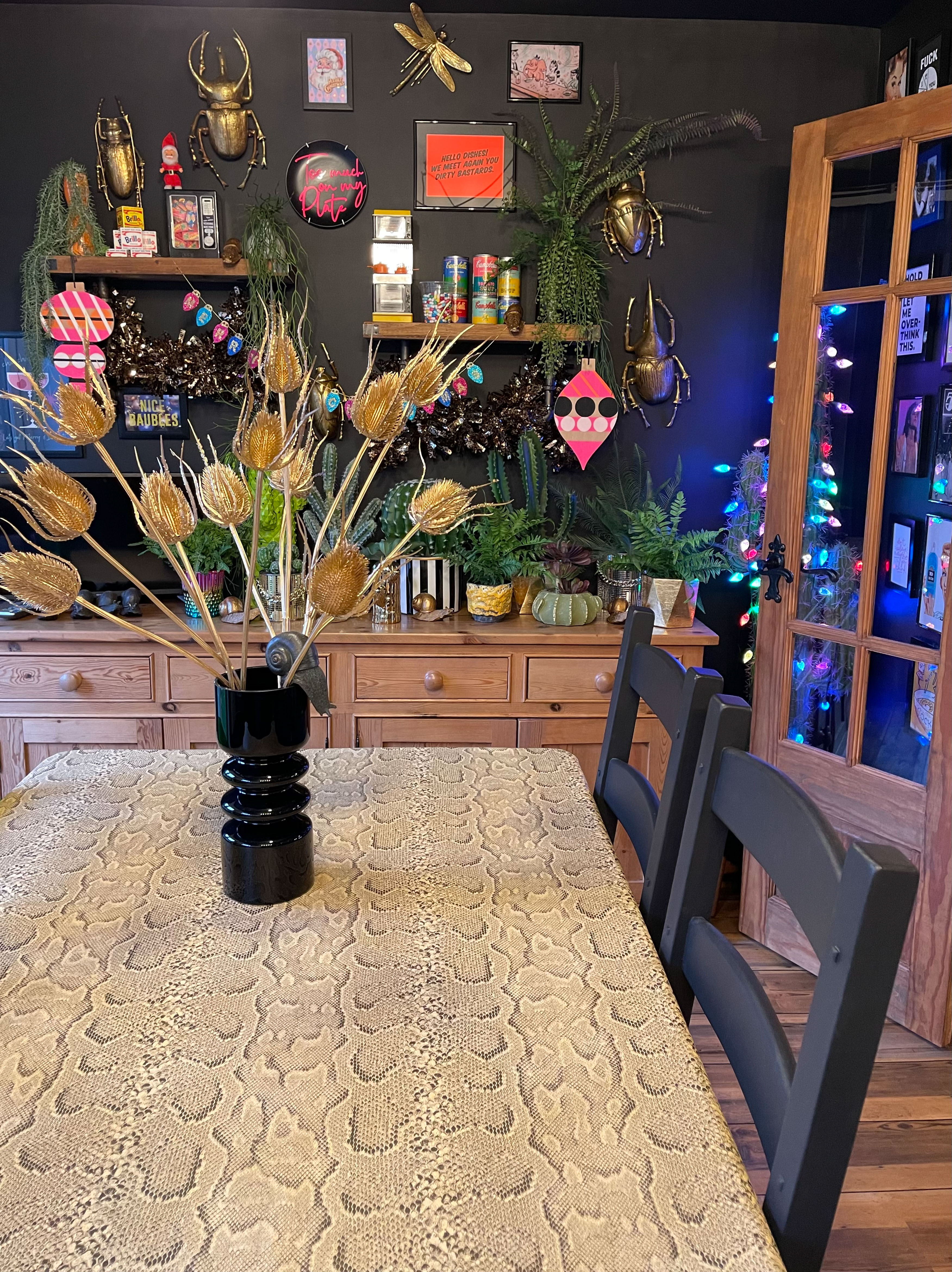 "One of the bedrooms is my own personal dressing room and all four walls are papered with picture girl magazines from the fifties, whereas the other spare bedroom has lots of old James Bond movie posters that Dean has collected.

"We both just really like anything a bit different and adore mid-century themes, so we’ve tried to match those passions with our home which was actually built in 1969."

In keeping with their mid-century theme, the couple have also tried to source furniture from the era to kit out their home – which was built in 1969 – with.

She said: "We managed to get a tan couch that has a vintage look for the living room, alongside some vintage G-Plan furniture such as the coffee table and sideboards which cost about £1000, and added lots of plants to fill the room up a bit more.

“I got black clear cabinets to display my fifties hair clips, bags and accessories in the spare room, and they work amazingly in front of the back drop of the women’s magazines wallpaper.

“Dean and I really love attending 50’s events, and like to dress up in styles that replicate the era.

“So we needed somewhere to display my petticoats, circle skirts and hair pins as well as Dean’s Hawaiian shirts and the like, so we converted one of the rooms into a dressing room with clothes rails."

And even had the outside of the house has had a makeover too with some vibrant orange tiles – which luckily has gone down okay with their neighbours.

She said: “We were quite worried that the neighbours would complain when we put the orange tiling on the outside of the house, but we were quite surprised when people mentioned they liked it and someone across the way actually did something similar.

“We’ve had a pretty positive reaction from our followers on Instagram too, but a lot have joked that they’d hate to be the ones dusting the house just because of our maximalist nature of collecting and displaying items."

For more amazing home transformations, this normal looking semi-detached house is named one of the UK’s most gorgeous homes – inside it’s a whole other story.

And this mum was quoted almost £3k to transform her garden does it herself for a fraction of the price thanks to Facebook bargains.

Plus these are the five Ikea bargains that’ll instantly transform your home – and it can cost you less than £20.