The biggest American social networks predate the presidency of Donald J. Trump, some by more than a decade. All were changed by Mr. Trump’s arrival to power, joining many other American institutions in a conspicuous struggle to account for or accommodate political and social upheaval.

Each social network has expressed its intention to be a place where people can gather, communicate and act. Their shared surprise at what it actually meant to find themselves at the center of American politics was, if we’re being generous, a failure of imagination.

In 2018, just two years into the declared era of “America First,” Musical.ly, a lip-syncing app popular with young teenagers that had recently been purchased by the Chinese technology conglomerate ByteDance, was merged into TikTok, known in its home market as Douyin. The resulting app, a short-video-sharing platform combining elements of Instagram, Snapchat and Vine (R.I.P.), glued together with heavy-handed recommendation algorithms, became an enormous hit. Its success — it claims far more daily active users than Twitter, for example — also came as a surprise to the tech industry, even after ByteDance spent lavishly to advertise its app on American platforms, and as videos created on TikTok spread across competitor networks like Instagram.

In its American form, at least, it’s the first post-Trump social network. So what do its users think of the president?

“If You Want to Make a Liberal Mad …” 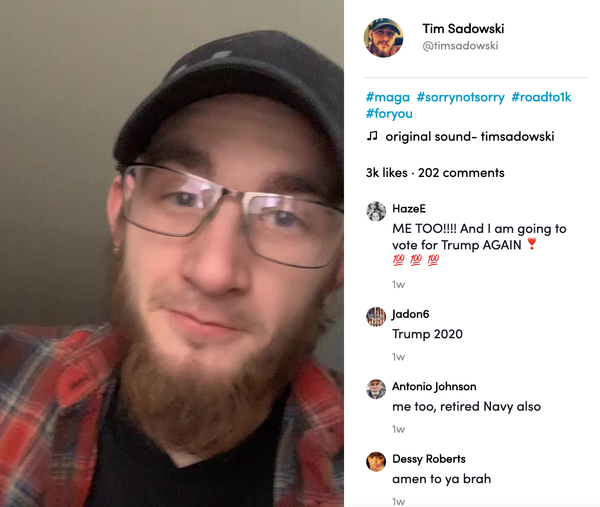 It wouldn’t be quite right or even possible to suggest that Donald Trump is “taking over” TikTok, or that there’s even an unusual amount of pro-Trump content on the app. (Besides, the only politician regularly seen on TikTok is Arnold Schwarzenegger.) And nearly everything you encounter on the app feels like it’s “taking over,” because you're rarely sure why you’re seeing it at all.

The first thing you notice about Trump TikTok is the hats. They’re not incidental, either — they’re often the subject of the videos. “Don’t take 8th graders to Washington D.C.,” warns a smiling teenage girl in a “Make America Great Again” cap, before cutting to what appear to be her classmates, also showing off hats of their own.

“Made it to California,” says another young person, from behind the wheel of his truck, MAGA hat on the dash. “Let’s see if we can’t go make some friends.” There’s merchandise everywhere: T-shirts, flags, decals. TrumpTok is rife with examples of how the president’s various logos, slogans and branded objects are understood by the people that actually wield them. Over the first chords of “Bad to the Bone,” we see a pair of boots, then the back of a car. The guitars open up, and we see a fresh bumper sticker: The Punisher skull logo, superimposed with an American flag and wearing an approximation of Donald Trump’s hair.

The most popular pro-Trump hashtags on TikTok are some of the most obvious: #MAGA, #Trump. A dozen or so larger hashtags have garnered millions of views, while countless smaller ones have accumulated tens or hundreds of thousands, according to the service. At the near fringes, as on most social networks in 2019, we have the conspiracists and Nazis. Generally speaking, these hashtags aren’t sites of conflict or debate. There’s no discourse or conversation, just participation. They’re not really communities, or even venues. They’re safe spaces for people to mock “safe spaces.” They’re effectively anonymous but intimate gatherings. They’re … rallies?

The Great Focus Group in the Sky

TikTok opens to a “For You” page, which is the app’s best guess at what you might want to see, rather than a feed of your friends’ content. Like other social apps, it encourages you to interact with people you know, but what it really incentivizes is participating in broader trends, or joining popular hashtags, or lip-syncing or performing to clips of songs or speech, or just casting about for a subject or trend to jump onto in your spare time. This ability to get people to join in scattered activities, instead of just posting for their friends, is what makes TikTok a great place to glimpse, for example, the joy and mundanity of other people’s jobs.

On TrumpTok, it looks like this: a grown man looking into the camera, voicing over a high, pitch-shifted voice, that “you can’t keep drugs off the street,” but that “you’d like me to disarm myself?”

What makes TikTok great at extracting content from its users isn’t the presence of friends, or the intimacy and privacy of a smaller social setting, but rather its sheer chaotic size and churning, constant regeneration. Join a hashtag! Sing a song! Nobody will see! Well, thousands or even millions of people might, but they don’t know who you are, so what’s the big deal?

So many of the most popular TikTok posts are just newly formatted versions of familiar sorts of viral content: clever, catchy, funny ideas, or riffs, they build off one another until they’re exhausted. There are, of course, the deliberate attempts to create pro-Trump TikTok content of this type: quick staged debates with imaginary liberals, jokes at the expense of “snowflakes,” and varieties of sloganeering, including recited political aphorisms (“if you want to make a conservative angry, tell him a lie; if you want to make a liberal angry, tell him the truth”) and bumper-sticker-length rhetorical questions (the effect is, approximately, Facebook meme read out loud, sometimes in voice-over).

It’s the behind-the-hat clips, and similar videos, that really stand out as unique to the platform. There’s the college student who posts videos about how he’s “about to go to class” with his Trump hat on, or how it’s a “great day to be a Trump supporter on college campuses.” The guy who’s “making sure everyone knows where he stands,” showing off a MAGA hat on his Dodge Ram and a Trump flag in what appears to be his own front yard. The young woman excited to share her new hat — “TRUMP 2020” — but who also has to be quiet, because her child is asleep. Another in a hat saying, “I’m about to offend somebody today. Are you ready? Trump.” The guy with the story about how his hat got under his mailman’s skin, delivered as if for a knowing audience.

For all the insinuations of risk and conflict, TikTok’s Trump supporters are generally seen alone, at peace, quite clearly enjoying themselves. They’re describing danger, or at least risky transgression, but expressing joy and, mostly, contempt. The campus campaigner never interacts with the other students he suggests he’s standing against. The snowflakes, a frequent subject, never materialize to defend themselves or even really complain. We never actually see anyone upset about the new MAGA bumper sticker. (We do, however, see someone who claims to be a “Sheriff Deputy K-9 & SWAT Officer” in his bio teasing a civilian out of his window, telling her that her car has been “vandalized” with a Clinton sticker.)

What TikTok collects, in other words, is a candid representation of an increasingly relevant component of the president’s appeal to a certain sort of supporter: that the fact of his power makes people mad; that those same mad people can, or at least will, be told that they’re overreacting; and that if they say something about the president, they’re saying the same thing about his supporters.

This is Trumpism stripped of conflict, as shared among members of the same group that perceives itself to be on the outs, even as it happens to support, and have the support of, the president. It’s a celebration, refracted through a Chinese video app for teens, of a potent force in American politics, and global politics, in the 21st century. It’s the ability to say “I dare you” while asking “how dare you?,” all by expressing support for the most powerful people in the world.

John Herrman covers tech and media for the Times Magazine, and was one of the first three recipients of The Times’s David Carr Fellowship. Previously, he was a reporter for the Business section. @jwherrman